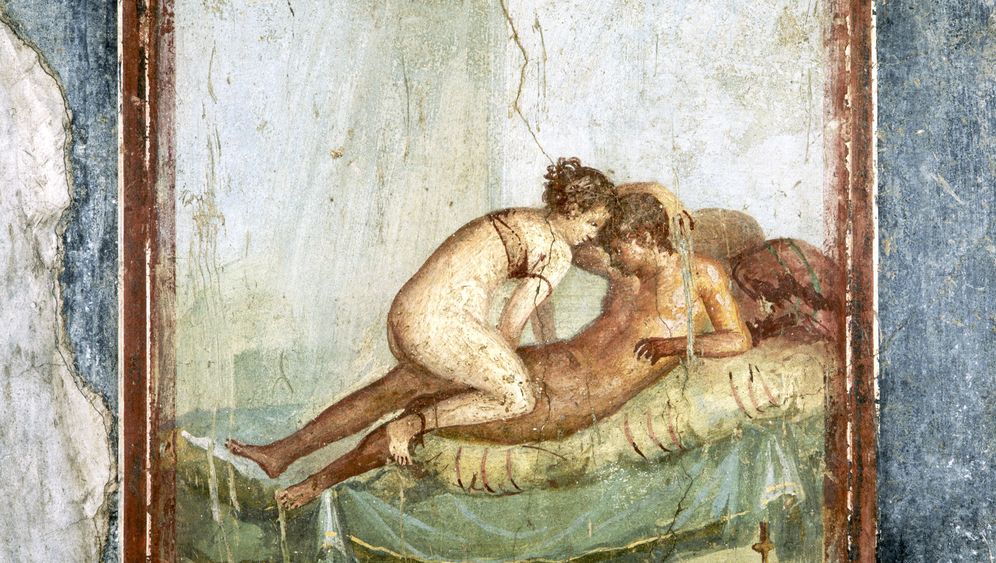 Photo Gallery: The Mystery of the Sacred Prostitutes

The "ugliest custom" in Babylon, the historian Herodotus wrote (who is believed to have lived between circa 490 to 425 B.C.), was the widespread practice of prostitution in the Temple of Ishtar. Once in their lifetimes, all women in the country were required to sit in the temple and "expose themselves to a stranger" in return for money.

The Persians on the Black Sea were apparently involved in similarly nefarious activities. According to the Greek geographer Strabo, "virgin daughters," hardly 12 years old, were dedicated to cult prostitution. "They treat their lovers with such friendliness that they even entertain them."

There are many such reports from classical antiquity. Tribes from Sicily to Thebes are believed to have indulged in perverse religious customs.

The Jews were also involved in such practices. There are about a dozen passages in the Old Testament that revolve around "Qadeshes," a word for female and male cult practitioners. The Bible calls them "lemans" and "catamites." In the Fifth Book of Moses, male prostitutes are prohibited from donating their "dogs' money" to the House of Yahweh.

Twentieth-century researchers eagerly seized on the references, which were often mysterious. Soon it was considered a fact that priests in the Eastern World performed forced defloration. It was said that there was "dowry prostitution" and "sexual copulation at the cult site."

Temple sex, according to the "Encyclopedia of Theology and the Church," was a "moral and hygienic plague spot on the body of the people."

Newly discovered cuneiform tablets paint a more defused picture, and it is becoming increasingly clear that the academics of earlier decades exaggerated the subject. For example, there is not a single piece of evidence proving that the ritual of forced defloration existed.

According to a new book on the subject, it all began when a few Greek writers concocted defamatory, dirty customs about foreign peoples, as evidence of their moral "damnability." In the modern age, the author writes, this filth developed into a "research myth."

Julia Assante, an American scholar of the ancient Orient and the leader of the movement, is convinced that sacred whores are merely products of "male fantasy."

But for moderate scholars, this interpretation goes too far. Although they also question some of the overblown academic opinions of the past, they insist that the phenomenon existed. They believe that there were once:

A bitter debate is unfolding, as Assyriologists with feminist leanings squabble with old-school professors. While the former consistently denounce the theories of temple prostitution as nothing but lies, the latter, citing Sumerian grammar, seek to defend their supposedly "patriarchal perspective."

There is, however, agreement on the subject of ordinary street prostitution in ancient times. Wearing garish makeup and yellow shawls, the whores of Athens advertised their charms at the foot of the Acropolis. Special "flute girls" offered to play the aulos for their customers before boldly getting down to business.

Rome's street prostitutes charged four aces (the equivalent of about €10, or $14). Messalina, a famous call girl, became empress when she married the Emperor Claudius.

Mesopotamia Was Particularly Known for its Loose Morals

The pious land of the Pyramids also offered sinful pleasures. Its prostitutes rubbed ointment onto their customers' bodies. "Your phallus is in the Chenemet women," an ancient papyrus text reads. "A man can copulate better than a donkey. It is only his purse that holds him back."

Mesopotamia was particularly known for its loose morals. A whore named Shamhat ("The Voluptuous One"), who appears in the Gilgamesh epic, beguiles the wild man Enkidu: "She unclutched her bosom, exposed her sex, and he took in her voluptuousness."

There were few objections to the profession in the Euphrates Valley. A clay tablet tells the story of a young woman who receives her customers in the house of her parents. She was paid with the meat of a piglet.

The Whore of Babylon

But what happened at the holy sites? What happened behind the walls of the Temple of Ishtar? This is a source of contention among scholars.

The Orient devoted enormous buildings to its goddess of sex and love. Hymns praised her as a "Mistress of Women" with "seductive charms." "In lips she is sweet; life is in her mouth" -- Whore of Babylon.

The Ishtar cult soon spread to the north, first to Cyprus, where Greek settlers came into contact with the goddess and renamed her Aphrodite. According to Greek myth, the beautiful Aphrodite rose from a bloody spot in the sea, where the water was colored red and full of sperm. It was the spot where Cronos, the ruler of the Titans, had thrown his father's severed genitalia into the sea.

No Signs of Sex Acts at the Altar

Nevertheless, there are no signs that sex acts and fertility rites took place directly at the altar, as scholars once claimed. "There is no evidence whatsoever of such magical practices," explains Gernot Wilhelm, an Orientalist at Julis Maximilian University in Würzburg, Germany.

Did Herodotus invent his story of forced sex among the women of Babylon? Gender researchers think so.

Nevertheless, there is probably more to the story than meets the eye. The temple of the sex goddess also included a special cult personnel, the "Harimtu," or "prostitutes."

Some time ago, Wilhelm discovered a fascinating legal document. It is about 3,300 years old, and it recounts how a man delivered his own daughter to the Temple of Ishtar to serve as a Harimtu.

According to the document, the man wanted a loan from the priests and was offering his daughter as collateral.

But what exactly did the pawned daughter do for her new employers? Wilhelm speculates that the young girl worked as a prostitute, "but outside the temple."

As evidence, the professor cites the "Book of Baruch" in the Old Testament. It describes prostitutes standing "along the paths" between the dusty houses of Babylon. They too were somehow associated with a sacred organization.

The skeptics are having none of it. Harimtu doesn't mean prostitute, says gender studies scholar Assante. She claims that Assyriologists simply translated the word incorrectly for 150 years.

Instead, says Assante, the word refers to a "single woman," who served as a cultish official and was not part of a male household.

Assante's adversaries cringe at her interpretation, accusing Assante of transferring her own social status into the pre-Christian era.

Her reinterpretation of the word Harimtu doesn't make semantic sense, says economic historian Morris Silver. He insists that the Harimtu were clearly "professional prostitutes with cultic connections," who offered a "sexual service" on behalf of the temple. Priests acted as pimps and collected some of the profits.

These sacred brothels probably also existed in Greece, specifically, as scholars believe, at the Temple of Aphrodite in Corinth. It was perched on a rocky promontory 575 meters (1,890 feet) above the sea.

It is indisputable that the city itself was a raucous place. Corinth was a hub of maritime trade, with hundreds of ships docked at its jetties. Sex workers, wearing flimsy dresses and garish makeup, were lined up along the docks to offer their charms.

But the temple to the goddess of love, high up on the cliff, also appears to have been a hub of sexual activity. "The Temple of Aphrodite was so rich that it owned more than a thousand temple slaves, courtesans," Strabo writes.

Hordes of sailors and sea captains, "hungry for sex," clambered up to the cliff temple, says British academic Nigel Spivey.

Tanja Scheer, a professor of ancient history at the University of Oldenburg in northern Germany, now proposes a better solution: "The reports of a sacred brothel in Corinth are all based on an ode by Pindar," she explains. Pindar writes that a wealthy Olympic champion dedicated the temple to a "hundred-limbed" throng of prostitutes in 464 B.C.

But, as Scheer points out, it is unlikely that the prostitutes lounged directly at the altar. Instead, she says, the wealthy athlete probably offered the temple financial assistance in the form of female slaves. "The proceeds from the sale of their bodies could serve as a regular and ongoing source of income for the temple."

Scheer's theory is supported by the fact that the Athenian statesman Solon, who established government houses of pleasure in Athens around 590 B.C., imposed taxes on the prostitutes. The city used the revenues to build a temple to the goddess of love.

As a fragment from an old comedy reveals, very young girls apparently lived in the brothel. The text describes the "foals" of Aphrodite standing naked in a line," and notes: "From them, constantly and securely, you may purchase your pleasure for a little coin."

It is also possible that things were even worse for child prostitutes in the ancient world. Some scholars speculate that there may have been sacred sex between children.

Again, the trail leads to Babylon and its 91-meter, pyramid-shaped tower, one of the wonders of the ancient world. According to some sources, there was a shrine at the top of the tower that contained a bed, where a chosen girl slept at night, constantly prepared for a "sacred wedding" -- the symbolic sex act with the god Marduk.

Child Abuse on the Nile?

Farther afield, in the main temple of Thebes, in the land of the Pharaohs, there was a "godly consort of Amun."

This priesthood was occupied by "a maiden of greatest beauty and most illustrious family," Strabo writes, "and she prostitutes herself, and cohabits with whatever men she wishes until the natural cleansing of her body takes place" (menstruation).

Child abuse on the Nile? There are many historical clues that have led to speculation among academics, particularly now that a new document has fueled the debate even further.

It is a worn fragment of an Egyptian scroll, which also addresses the subject of young priestesses.

According to the text, girls are permitted to work in the temple until their first menstruation. After that, however, "they are cast out from their duties."