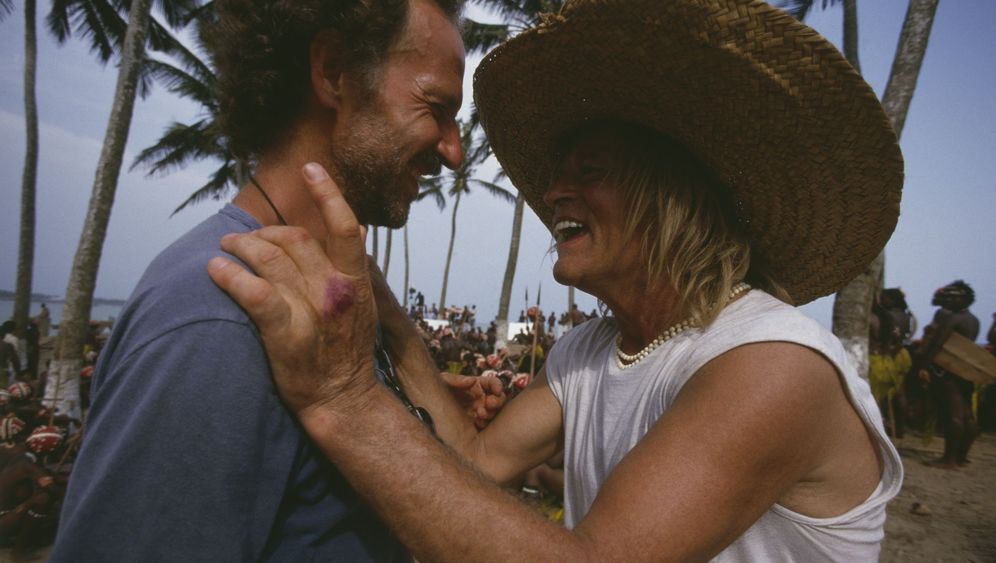 Two questions are enough to reveal the deep complexity of German actor Klaus Kinski's appeal: Why are we so fascinated with him? And why are we simultaneously so repelled?

The answer to both questions is the same. It was his madness, his not always successful tightrope walk between sanity and lunacy. And it is an answer that remains unchanged even after his daughter's disturbing interview this week, in which she said he had sexually abused her.

The first reaction to the news was a visceral one: Will it ever be possible to enjoy being a Kinski fan again? Or is it even possible to continue being a Kinski fan at all? Still, given Kinski's unique genius for providing an unobstructed glimpse into his disturbed soul, the confirmation of evil somehow fit seamlessly into our overall image of him.

It is an image that began with his voice. In his famous German language recitation of Frenchman François Villon's poetry, it pulsates and erupts with emotion; he needs but a breath to move from violence to tenderness. And both were part of his schizophrenic personality. To hear it is to accept that the voice's owner must be borderline insane. Or a genius. Or an insane genius, which is how we prefer our geniuses to be.

It is obvious to viewers of Kinski's most important films that this madness is not acted, but a state that he could easily cross into. The films he made with Werner Herzog were particularly bleak journeys, and not just into the lost biographies of his heroes, all of whom were diabolical characters. They were also trips into the soul of his tortured lead actor -- and that is what gave his works such power.

Tormented by an Egomaniac

In "Aguirre, the Wrath of God," Kinski was the conquistador who drove his men into death, leaving just the monkeys of the jungle at the end. In "Fitzcarraldo," he plays a wraithlike adventurer who wants to build an opera house in the heart of the wilderness. In "Nosferatu," he portrayed a deceitfully innocent-looking vampire who robbed souls. In "Cobra Verde," he was a slaveholder and child molester. It was only in "Woyzeck" that Kinski failed. The original figure was an underling at the mercy of others -- and that is a role that Kinski was unable to play. Klaus Kinski, after all, only ever played himself.

Nobody knew that better than director Werner Herzog. Indeed, it would be interesting to know how he feels about the allegations of abuse levelled against him by his daughter. Because Herzog belongs to that group of people who, in their own way, were all tormented somehow by the egomaniac Kinski, who died in 1991. As a 13-year-old, Herzog shared an apartment with Kinski for three months, when the young actor "from the very first moment terrorized everyone" with his fits of rage, Herzog said. Just how traumatic this experience must have been for the sensitive youth who went on to become a filmmaker is depicted in the documentary "My Best Fiend."

Herzog got to know Kinski as a wild-eyed madman, which is exactly how he cast him in his films. The result was a series of masterpieces bristling with the kind of megalomaniacal power that the world hasn't seen since. Had Kinski made comedies, they would have been eternally destroyed by his daughter's revelations. But, horrifyingly, the films he made with Herzog survive. Even worse, the evil within them has become more genuine, retroactively authenticated by the depravity of their lead actor. There is a difference between playing a role involving incest and actually living it out as Kinski has been accused of doing. It is the difference between being an artist and being a criminal.

It had always been clear to enthralled audiences, as they watched Kinski dance on the precipice of lunacy, that they wouldn't be able to stand the man for even five minutes in real life. His daughter, however, was left at the mercy of this crazy genius. Three years ago, her younger sister Nastassja Kinski said in an interview: "He hurt us so badly. It is good that some people don't remain in this world for longer." Her sister Pola has now provided the background for that verdict. He was probably the monstrous psychopath that we always thought he was. In the Friday edition of the tabloid Bild, Nastassja describes her sister as a "hero" for coming forward with the accusations.

Kinski didn't even try to hide his mindset. His comments in a 1977 talk show -- displaying as always his disregard for God, the world and societal morals -- are legendary. "Here, you land in prison for sleeping with a 12-year-old girl; in the Orient, they marry at age 11. Isn't that absurd?" he said to approving laughter from the audience.

It is exactly this deification that Pola Kinski has courageously contradicted. It is courageous because she is not only taking on her father, but also his adoring fans. Are we accomplices because we interpreted his unveiled criminal cravings as art?

For "My Best Fiend," Herzog traveled to sites where the movies he made with Kinski were filmed. He presented outtakes and archival material and showed the physical and psychological violence his lead actor exhibited on the set. "He would scream at me for hours, two inches away from my face," Herzog says in the film. But he also noted that "he was also very loving with me then and would kiss me and hold me and could also be very emotional and very moving." Herzog reached the conclusion that working with insanity had made him crazy -- or complicit -- as well. His therapeutic documentary ends with the weak claim that their joint derangement must have converged to create great art.

"My Best Fiend" ends with a conciliatory scene of unexpected gentleness -- a scene that, in light of the new revelations, is horribly unbearable. An enthralled, laughing Kinski is playing with a butterfly that is fluttering about. Herzog says with feeling: "Then I see him with a butterfly, softly, delicately. The little creature doesn't want to leave him, and is so unafraid. Sometimes it seems to me that Klaus himself turns into a butterfly. Everything that weighed on us is gone. And even though my mind revolts against it, something deep inside tells me this is the way I'd like to keep him in my memory."

That, however, is no longer possible. And perhaps it's better that way.