The people next to the bar are clutching their drinks tightly. A little closer to the dance floor, people are swaying to the beat and nodding their heads, while under the disco ball others are letting loose, showing creativity and coordination -- or at least trying to.

It's a familiar scene in every disco. But what exactly happens to us when the beat kicks in? Why are some folks bursting with confidence on the dance floor, when others appear to be stuck to their barstools? And perhaps most importantly: What dance styles are most likely to find you a potential mate? 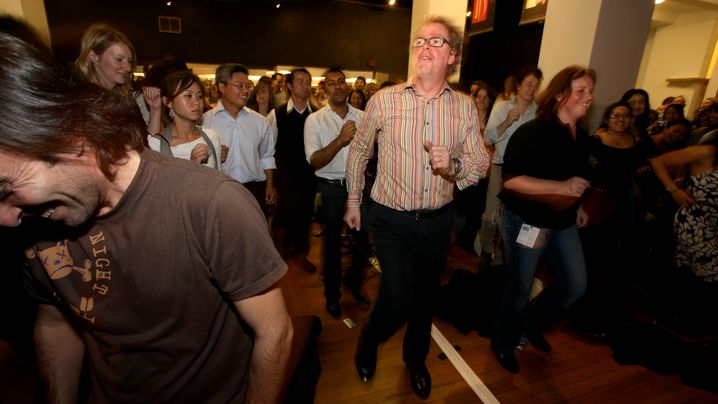 Photo Gallery: I Bet You Look Good on the Dance Floor

If one is to believe psychologist Peter Lovatt, three factors influence how confidently an individual moves on the dance floor -- and how attractive the other gender finds the performance. Those factors are age, gender and genes.

Lovatt, a psychology professor at the University of Hertfordshire near London who is widely known as "Dr. Dance," bases his conclusions on rigorous field work. In January 2009, Lovatt visited a nightclub at his university -- for purely scientific reasons, of course. His mission was to find out which style of dancing was most attractive to the opposite sex, and why.

First of all, his students measured clubbers' ring and index fingers. The relationship between the two fingers is believed to be related to how much testosterone an individual was exposed to in the womb. If the ring finger is longer than the index finger, it suggests a high level of prenatal testosterone.

Lovatt and his team observed the dance floor closely and took certain dancers aside for a solo performance. Those selected groovers were then filmed for 30 seconds on a separate dance floor which was, according to Lovatt, "just as lively and noisy as the main dance floor." Then the team headed back to the lab with their videos.

Lovatt then applied a filter to the footage so that the dancers could only be seen in silhouette, which meant that any viewer had to focus solely on their movements. He showed these films to students, who had to rate the dancers on a five-point scale from "very attractive" to "very unattractive."

The men who got the female students hot under the collar danced with large movements which were "complexly coordinated." But it's a fine line between hot and not, however: Those men who made big moves but who were less coordinated came across as dominant alpha males -- and were unlikely to win women's hearts. The researchers also found that the size and complexity of the dance moves decreased in parallel with testosterone levels.

In women, the link between dancing style and testosterone levels were similar -- but the reaction of men was just the opposite. Dancers with high levels of testosterone moved more parts of their body, with their movements being somewhat uncoordinated, while those with lower testosterone made more subtle movements, especially with their hips. The male students found the latter style most appealing.

Lovatt says that he has entered uncharted territory with his research. "There are many people who work with things like dance therapy, but there is currently no one who is studying the psychological aspects of dancing using an experimental approach," he says.

From Theory to Practice

Lovatt knows his subject matter well -- he himself was a professional dancer until the age of 26. He performed in musicals in large venues around England and also worked on cruise ships. The thought of an academic career barely entered his head at the time. He wasn't even able to read until he was 23, having left school without any qualifications. When he looked at a page in a book, "all I saw was a big black block."

Lovatt decided to teach himself to read. "I thought it was ridiculous that I couldn't," he recalls. At the age of 26, he took his A-levels, the standard entry qualification for universities in England, and gave up his career as a professional dancer. He studied English and psychology and went on to conduct research at Cambridge University. He was working on memory and language -- "very theoretical stuff," as he describes it -- when he had a Damascene conversion. "One day I was walking across campus and I thought to myself: This is not me, I don't want to do this anymore."

He realized he missed dance and physical movement. He decided to combine both his interests and started to study the psychology of the performing arts. He found a position at the University of Hertfordshire and set up the course "The Psychology of Dance." But Lovatt didn't just speak about his research -- he also danced in his lectures. He became more and more popular with students and the course was a resounding success.

Nowadays Lovatt is much in demand as a speaker. Last October, he was a guest at the Science Museum in London, where he delivered a series of lectures entitled "Dance, Hormones and Sexual Selection." At the end of each session, the whole room was dancing.

Lovatt's research is easy to grasp. Everyone can appreciate that women are not attracted to men who barely move and show little imagination when they dance. Lovatt knows this, and he knows how to sell his work. After all, as a professional dancer he learned how to entertain, and win over, an audience. He just had to learn to do the same thing verbally. Take, for example, his explanation of why women are not attracted to men with primitive moves: "Women simply don't like it small and simple."

In another study, Lovatt presented a variety of dance styles in a video shown on the BBC's website. First, he simply steps from left to right, moving his arms up and down. Then his side steps get wider and he raises his arms higher. After that, he keeps the size of the movements constant but changes the style, bending his arms, snapping his fingers before making circular movements with his arms. He finishes off by making uncoordinated floundering movements with his arms.

Photo Gallery: I Bet You Look Good on the Dance Floor

Viewers are asked to complete a questionnaire and decide which of the demonstrated styles was closest to their own dancing technique, in terms of size and complexity. In addition, participants were asked to rate their own dancing prowess compared to people of their sex and a similar age, ranging from "terrible" to "excellent."

The response was huge, with almost 14,000 people taking part. "Everybody thought that their dancing skills are better than average for their age," says Lovatt. Perhaps it's not surprising -- after all, who wants to admit to being a complete loser in the dancing department? But Lovatt also unearthed a less obvious finding, namely that satisfaction with one's own dance skills -- something he terms "dance confidence" -- developed differently in women and men over the course of their lives.

Dance as a Social Act

The largest degree of satisfaction can be found in girls under the age of 16. "They see dance as something fun, not as part of mating behavior," says Lovatt. That changes around the age of 16. "Between 16 and 20, dance confidence among girls falls markedly," says Lovatt. "Girls begin to see dance as a social act rather than a way of expressing themselves. They begin to worry about how they look and start searching for a boyfriend."

But once young women have come to terms with their lost dancing innocence, the satisfaction ratings start rising again. From the age of 20 onwards, their opinion of their own dance floor competence starts to improve and keeps increasing until the age of 35. After that it hits a plateau, however, as satisfaction levels stagnate. From 55 onwards, the value even drops. "That coincides with the menopause," says Lovatt. And it doesn't get any better: "Dance confidence remains low for the rest of a woman's life."

The pattern is somewhat different among men. Their dance confidence levels keep rising until the mid 30s. It then stagnates before starting to sink from the age of 55 onwards. But then, surprisingly, men get a second wind. From 65 on, they start to once again see themselves as pretty smooth operators on the dance floor.

Lovatt thinks it might have to do with the falling confidence of older women, which could have a liberating effect on men. "A lot of men have come up to me and said, 'Oh, man, I'm a terrible dancer,'" Lovatt says. "I asked them why, and they answered: 'My wife says so.'" But if women are dissatisfied with their own dancing skills, Lovatt reasons, then they are hardly in a position to criticize their husbands, who can then feel free to release their inner Travolta.

An alternative theory explains the patterns in terms of natural selection. "Optimistic people live longer," Lovatt says. "They are less likely to develop a life-threatening illness." Hence it could be that the relative percentage of optimists in the population starts to increase from the age of 65.

So what does Dr. Dance prescribe for those who prefer to keep their booty firmly attached to the nearest bar stool, rather than shaking it? "I don't think there is anybody who can't dance," says Lovatt. "You shouldn't be afraid of your own movements, you should relax."

At the end of the day, Dr. Dance's message is simple: "Let go, your body should move!"

Want Dr. Dance to analyze your dance moves? Send us your video and we will publish a selection, with Dr. Dance's evaluation.

13 Bilder Photo Gallery: I Bet You Look Good on the Dance Floor 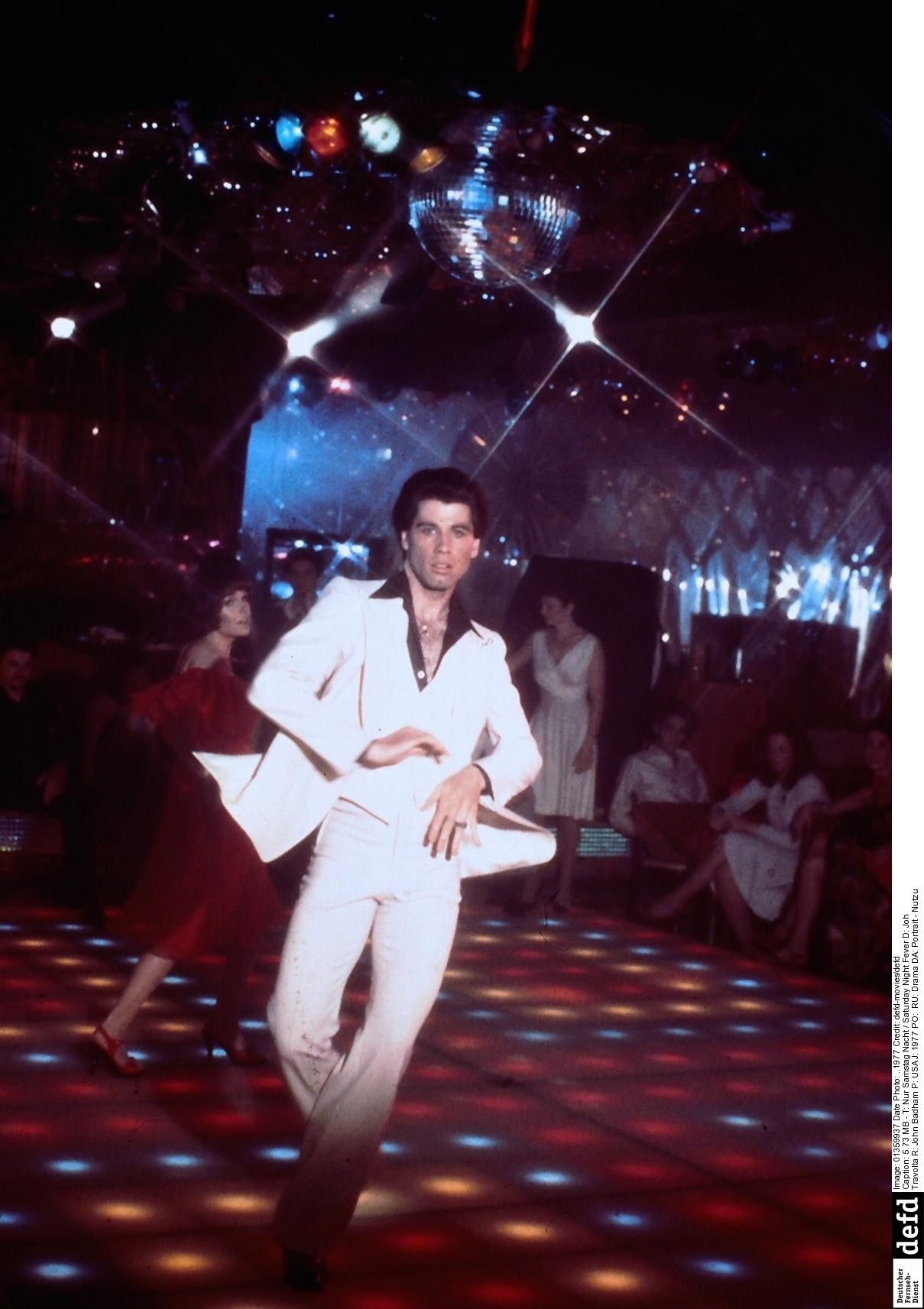 John Travolta in the film "Saturday Night Fever" sets the standard by which other dancers are measured.

John Travolta in the film "Saturday Night Fever" sets the standard by which other dancers are measured.