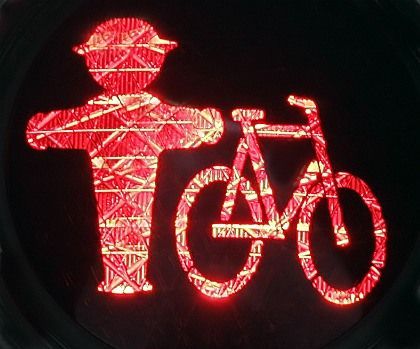 Pedestrians and cyclists in Bohmte will have to rely on their wits from now on -- the town is abolishing traffic signs.

The idea of a town with no road signs conjures up ideas of Italian-style traffic mayhem, with cars whizzing everywhere and nervous pedestrians diving for cover. But for some traffic experts, such chaos is to be embraced -- or, as the title of a recent traffic conference in Frankfurt put it, "unsafe is safe."

Now the town of Bohmte in the German state of Lower Saxony is putting its money where its motor mouth is -- it's getting rid of its road signs in a bid to cut accidents.

The work to remove the road signs will begin Wednesday in the town of 13,500 inhabitants. Sidewalks will disappear, as will the asphalt, replaced by cobblestones. Cycle lanes and sidewalks will be distinguished from the road only by color. The town is putting up half of the project's €2.35-million costs itself, with the EU and other sources of funding supplying the other half.

The idea is based on the European Union-supported "Shared Space" concept of traffic management developed by the Dutch traffic expert Hans Monderman. According to the concept, road users have to negotiate their behavior with each other, rather than have it prescribed by rules -- the idea being that people will pay more attention to what other road users are doing and hence cause fewer accidents.

The radical philosophy has already been implented in the town of Drachten in the Netherlands, which has abolished its road signs and traffic lights. Accidents there have declined dramatically since the new regime was introduced.

And other small towns are also considering implementing the concept. According to a recent report in the German daily Berliner Zeitung, the town of Fürstenberg an der Havel near Berlin has commissioned a feasibility study to see if the no-signs approach can work there too.