It was the early '80s. Protesters were marching on the nuclear power plants in Brokdorf and Gorleben, Nena was singing about her 99 red balloons, and Bayern Munich was the German football league champion for the nth time. It was also the time when Lucy and Jürgen assembled their first double bed in their home near Stuttgart. The wooden flat-pack model from a certain Swedish furniture company was just a snug 140 centimeters (55 inches) across. They covered it in shiny satin sheets as purple as Lucy's T-shirt-cum-nightie, and Jürgen would simply drop his thin leather tie on the floor before hopping into bed. After all, they were living in sin.

Almost 30 years, one house purchase, several extramarital affairs and two children later, their one-time love nest has been demoted to a basement guest bed. Upstairs, in the master bedroom, they may now have graduated to a king-size mattress, but Lucy only sleeps in brief intervals. The children are partly to blame; even though they are eight and 10 years old, they still try to sneak into their parents' bed. But the main reason is Jürgen's ear-piercing snoring, which is interrupted -- albeit briefly and rarely -- by disconcerting apnea.

It's been a long time since things were wild between them. In fact, their relationship is rather silent, and Lucy sometimes even fantasizes about getting a divorce. But separate beds? "No way," she says emphatically. "Just think of the children. And what would we have in common anymore?"

Marital Bliss Ends in the Bedroom

Good question. What sounds like a case of borderline marital strife is actually an everyday saga in the average German bedroom.

No matter how battle-scarred a marriage or relationship may be, bed-sharing is an expression of a bond that flies in the face of everything that scientists and counselors say we should do to sleep healthily and maintain marital bliss. Still, despite the scientific evidence, about half of all couples that share a bed insist that they sleep better that way.

Now, though, researchers at the University of Vienna's sleep laboratory have confirmed the claim of Loriot, a leading German humorist, who has said that men and women simply don't belong together -- even when they're unconscious.

The Viennese somnologists have left few stones unturned in their investigations of how people sleep. Doctors, biologists, psychologists, behaviorists and sociologists were called in to analyze how sharing a bed affects "sleep quality, overall well-being and the quality of the relationship in question." While writing their study, they interspersed cultural and historical anecdotes about sleeping practices within the presentation of the hard research data.

Not Just a Matter of Sleep

It's safe to say that withdrawing in pairs is not necessarily the most exciting way to rest at night. Members of some societies in Africa and Asia still seek warmth and safety at night in larger groups. But, as a result of 17th-century social and religious mores, twosomes became the model in Western societies -- with the expectation that sleep might not be the only activity engaged in. The French, for example, were fond of retiring in a linen nightshirt, the chemise cagoule, which featured a conveniently placed slit at groin height. At the same time, in some parts of the United States, which was then the bastion of Puritanism, spouses could face criminal penalties for going to bed together even with their clothes on unless they seriously intended to procreate.

Indeed, people who could afford it would have separate sleeping chambers for the master and mistress of the house, a luxury that modern-day marital researchers are busily promoting once again. As feminist family planning researcher Marie C. Stopes conceded in the early 20th century, couples that share a bedroom might have periods of passion every once in a while. The corollary, however, is becoming a regular witness to the "unattractive, even absurd rituals of personal hygiene." Stopes worried such displays might diminish the amount of desire that members of couples feel for each other, not exactly convenient for a marriage.

And, yet, the delicate balance of harmony in the matrimonial bed is about far more mundane things than sex. She wants to read, he wants to watch the game on TV. He prefers to sleep with the window open, even when there are icicles outside; she shivers under a goose-down quilt. One blanket or two? Should the mattress be latex, foam or feather? Whether it's shacking up, having children or getting old together, lifelong companionship is beset with hurdles that can adversely affect the traditional bed-sharing ritual.

Different sleeping habits aside, numerous studies have also concluded that one reason why sharing a bed can be so nerve-wracking is because there are genetic differences in the way men and women sleep. For example, women need more rest than men, go to bed earlier, feel cold there more often and are more inclined in the morning to want to sleep in, though they also tend to be the early risers.

Men, on the other hand, are better at keeping a constant body temperature, which is one reason why the experts in Vienna say men are so well-suited to warming their partner up. Men are typically night owls, snore more often and are better at sleeping through disturbances. Most men are blissfully unaware that their wives wake up a lot and have sleepless hours -- and continue to slumber unperturbed at their sides. Differing hormonal activity in men and women also translates into asynchronous periods of light and deep sleep, which happens to be something women have more trouble coming to terms with.

A Man's Sleep Is Not a Woman's Sleep

Under these circumstances, it's hardly surprising that men claim to sleep more soundly when their partner is in bed than when she isn't. By contrast, women say they are woken up more often by their partner, either because the noise emanating from the other side of the bed has become intolerably loud or because the unequal weight distribution on the mattress bounces them around as if they were on a trampoline whenever their male bedfellow rolls over (which he does, by the way, up to 30 times a night).

Researchers also say that the fact that women have a harder time relaxing at night has something to do with the still typical division of household responsibilities within our society. Mothers, who predominantly play the role family caregiver -- that is, satisfying children's needs, caring for the elderly and worrying about teenagers that don't come home on time at night -- pursue their familial "air traffic control" duties at night as a way of preventing conflict and accidents. And it's not like they can just flip a switch and relax.

With age, these gender-specific sleep patterns only get more pronounced. Women suffer from restless leg syndrome, while men gradually lose the ability to sleep deeply. Those who like to take naps during the day find that they can't fall or stay asleep at night. And, despite the fact that most men are amazingly impervious to their own bodily odors, women aren't. Not even a couple sprays of Chanel No. 5 -- whose dream-evoking qualities even Marilyn Monroe cherished -- are going to be able to smother the smell emitted from wearing flannel pajamas and wool socks.

Likewise, scientists have identified almost a hundred different sleep disturbances. So, is it any wonder that couples cannot rest easy when they then pool their problems?

Embracing the Sheets That Bind You

Despite all they have to endure, it's still mainly women who are loath to forfeit the proximity, assurance and sense of security that sharing a bed affords. "I couldn't fall asleep without my husband. I've been like that all my life," a 69-year-old woman from Munich told American somnologist Paul C. Rosenblatt, who interviewed 42 couples about their nocturnal habits. His findings were clear: There's more to going to bed with another person than sleep and sex. Instead, it's about fostering and maintaining a relationship.

Often enough, people who live together only find out what really moves their partner -- their experiences, their aspirations, their preferences, their pet peeves -- once they are lying in bed together. Germans watch an average of 3.5 hours of television a day. According to statistics compiled by marriage counselors, couples spend only about eight minutes a day speaking to each other. So, it makes good sense that they should at least spend the night together.

Despite what scientific findings have indicated, our double-bed society tends to associate separate bedrooms with the waning of love and the beginning of separation. Some people are embarrassed about what their children might think; others are worried that it's a sign that their partner is distancing him- or herself both physically and emotionally.

One thing is certain: Having passed through the period of blind infatuation in which few people care much about getting undisturbed rest, many people realize they desperately need a good night's sleep. This, in turn, ushers in a cooling-off phase in the bedroom. According to researchers, this mainly takes place non-verbally with the unfortunate result that, over a period of years, the couple begins to have misunderstandings and experience unconscious aggression. Viennese sleep psychologist Gerhard Klösch says waking up with a vague feeling of rage or anger can simply be the result of having spent yet another night next to a snoring bedfellow.

Klösch also says that the question of whether both partners are sleeping well should be addressed early on, openly, together and with plenty of understanding rather than waiting until one of the bedmates has rings around the eyes. So, 15 years into a relationship, if you find yourself yearning for the next business trip so you can get a decent night's sleep again, you should speak to your partner about it without delay -- or, instead, seek out a therapist who can delve more deeply into why you would prefer to make life miserable for yourself.

For the widow in Munich, though, that's no longer possible. Ever since her husband died, she has shared her standard-size double bed with his two teddy bears. She says she appreciates the fact that she can now stretch out. "But if my husband could lie beside me once again," she admits, "I'd give up the privilege in an instant."

Translated from the German by Jan Liebelt 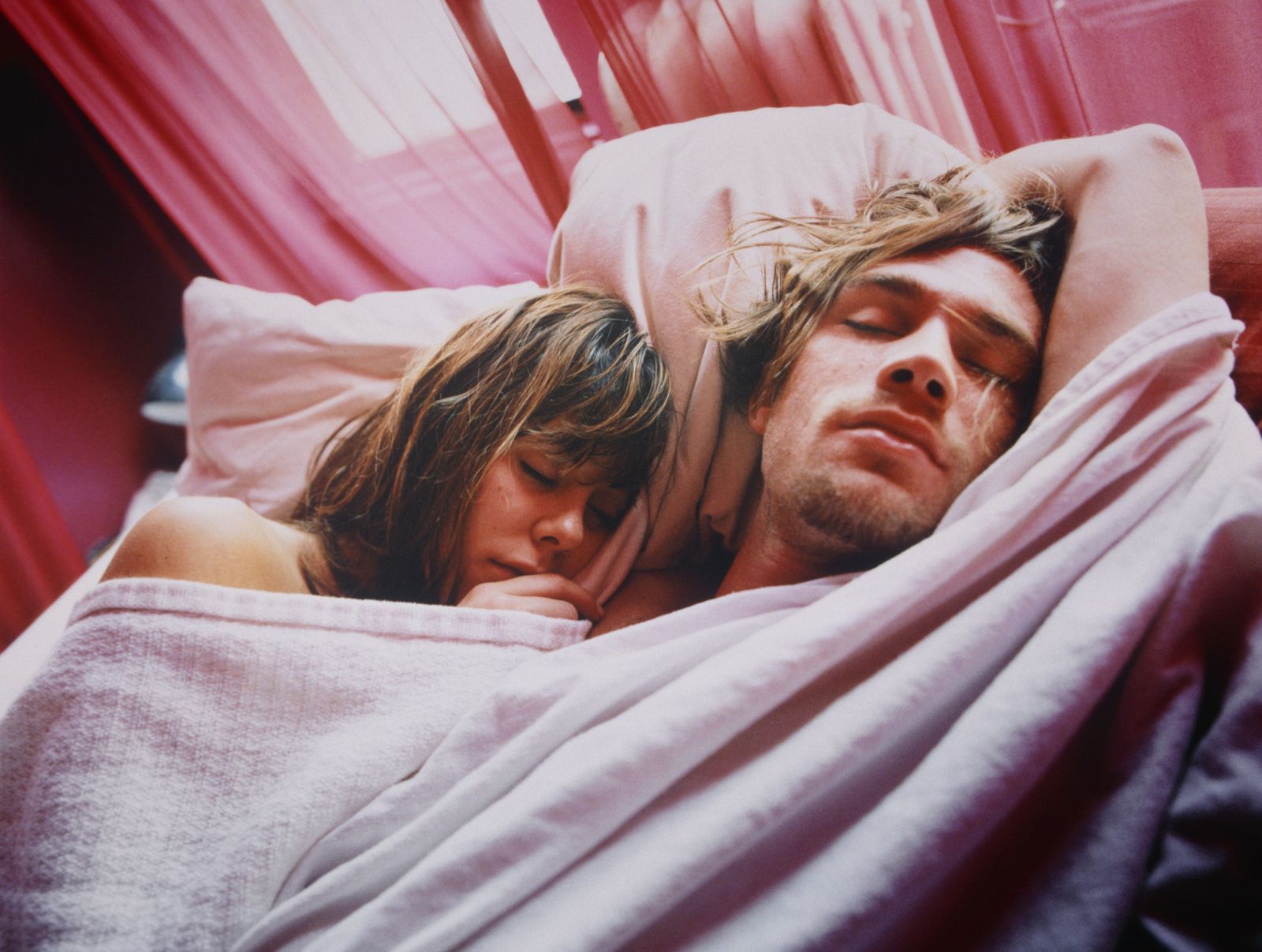