A day prior to making that statement, Moral had been praised in Germany's top-selling tabloid Bild for being "Turkey's bravest female artist." But, though she describes herself as an idealist, Moral possesses enough realism to know that there are many who would wish her harm. 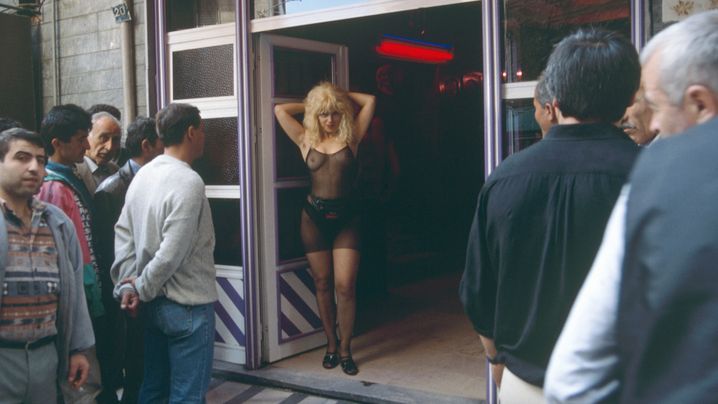 Moral was in Berlin in mid-November to help kick-off "Istanbul Next Wave," the largest exhibition of contemporary Turkish art ever held outside of Turkey. The exhibition, held at three venues in the German capital, features six of her works, all of which provide clues as to the origins of her trepidation. She is daring in her art, taking steady aim at the shackles into which women have been placed in Turkish society and elsewhere.

At the Berlin Academy of Arts building next to the Brandenburg Gate in the heart of the German capital, there are video installations of her 1997 works "Bordello" and "Hamam," both of which involve women invading traditionally male Turkish environments. In the first, she poses as a prostitute and holds a "For Sale" sign before a crowd of gawking men. In the latter, she sneaks into a Turkish bathhouse disguised as an attendant and strips before a shocked clientele.

An exhibit elsewhere in the city shows "Despair," a 2003 film of would-be immigrants floating on a skiff at sea. And there is "Artist," a 1994 self-portrait of a largely nude Moral in a crucified position. "That's meant to show what it's like to be a female artist in Turkey," she says. "I still haven't come down from that cross."

When asked why an artist from a Muslim country would prefer to use Christian iconography, she merely responded: "You're Catholic. I can tell. Next question."

'They Told Me I'd Turn into a Whore'

Moral, who now splits her time between Istanbul and Rome, grew up in Terme, a small town near the Black Sea coast. She says she prefers not to talk about her childhood, but she lets a few details slip anyway. "After elementary school," she says, "they didn't want to send me to middle school. They told me I'd turn into a whore and that I should learn to cook. They wouldn't let me read books."

Moral turned to the world of images. When she was 18, she headed to university in Ankara, where she studied painting and earned a degree in fine arts. Then, believing that she couldn't realize herself as a female avant-garde artist in Turkey, she moved to Rome, where she earned another degree at the Accademia di Belle Arti, in 1994.

It's not difficult to understand why some in Turkey might feel threatened by her works. Her piece "Family Night," for example, shows an elegantly set table with wine glasses, fine china, silver and flowers. Sitting at the end of the table is a skeleton wearing a long, black wig, its mouth open in what Moral describes as a "Munch-like scream." Young girls dressed in white dance innocently around the table.

Among the fine tableware, however, lies a hammer, several bullets, a rubber snake, a butcher's knife and a pistol. "I collected articles from Turkish newspapers of the horrible, unimaginable ways in which women had been murdered," Moral says. "Then I put examples of the weapons on the table. You have these angelic girls prancing around the table. They don't know this is what they'll end up like."

Moral is not universally critical of her homeland. She says that many outside of Turkey are unaware of the broad support for democracy and civil liberties in the country. She also says that issues related to violence against women, partly thanks to contemporary art, play an increasing role in the Turkish media.

But the line between provocation and illegality is a fine one. "Some people who are very liberal about what they say in Turkey can still be thrown in jail," she says. "But, when it comes to what we do, officials haven't really understood contemporary art very well. If they ever understood what we were doing," she says with an uncomfortable laugh, "it'd all be over."

It is, however, in Turkey where the battle lines are most often drawn. Her 2009 photograph "Found Guilty," which is not part of the exhibition, depicts a naked woman with legs spread, her groin covered in blood. When she first displayed the work in Istanbul, Moral says her friends told her she needed to disguise herself and "get out of town fast or they'll kill you."

While nothing violent happened, she was approached by a man at an opening in Turkey who snarled at her "I'd fuck that." Moral was undeterred. "For me," she says, "it was a beautiful compliment. He was an ignorant man, but I liked what he said. I want people to want to fuck art."

"Istanbul Next Wave," which is dedicated to Istanbul's contemporary art scene and celebrates the 20 years that Berlin and Istanbul have been partner cities, is being held at three separate venues in Berlin. The shows at the Martin-Gropius-Bau and the Academy of Arts facility on Hanseatenweg will last until Jan. 17. The exhibit at the Academy of Arts facility at Pariser Platz will be viewable until Jan. 3. For more details, please visit the exhibit's Web site.