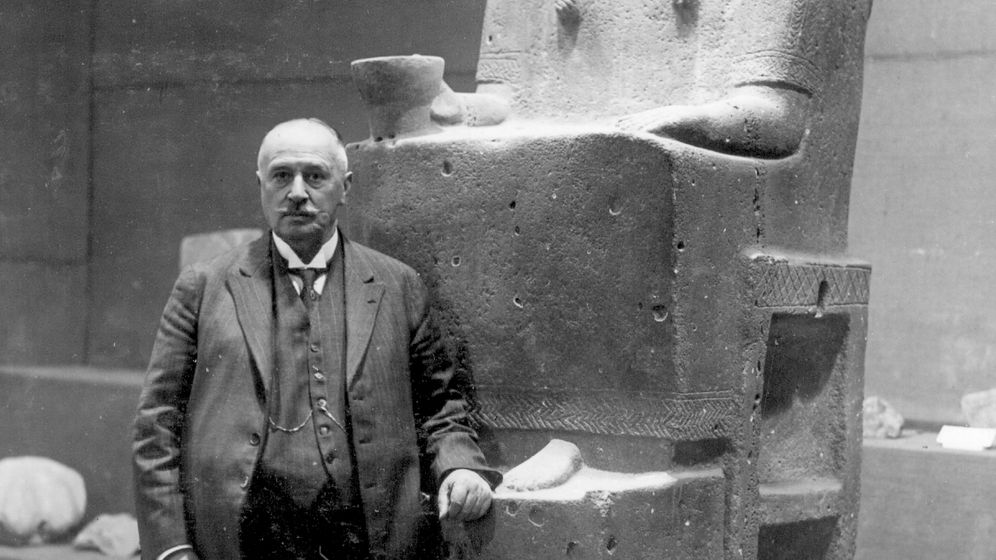 The Irish writer Samuel Beckett and Iraqi King Faisal I had traveled to Berlin to marvel at the latest sensation in the German capital. In July 1930, Max von Oppenheim -- diplomat, secret agent and frequent traveler to the Orient -- had established a private museum in Berlin's Charlottenburg district.

Griffins weighing several tons, sphinxes made of basalt and strange "scorpion bird men" were on display at Oppenheim's new museum. The mythical creatures were from a buried fortress on the edge of the Syrian desert dating back almost 3,000 years. The Bible refers to the mysterious site as "Gozan," though it is better known as "Guzana."

After discovering the giant stone figures, Oppenheim had them transported to Aleppo in 13 rail cars. There, the unparalleled hoard of cultural assets was loaded onto trucks and ships bound for Germany.

In the presence of crime novelist Agatha Christie, Oppenheim referred to the most striking of the finds, a female tomb figure with twisted locks of hair hanging in front of her ears and a pointy nose, as "my Venus."

But then World War II broke out. In 1943, Allied phosphorus bombs rained down on the statues from the Middle East, setting off a 900-degree Celsius (1,650 degrees Fahrenheit) inferno. As the fire was being extinguished, the sculptures shattered, leaving behind 27,000 pieces of basalt, some no bigger than a human thumb, which spent the Cold War stored in a basement.

The fragments were thought to be beyond restoration. But now the monuments have been resurrected. On Friday, Berlin's Pergamon Museum is opening a new exhibit ("The Tell Halaf Adventure") resulting from what it calls "one of the largest restoration projects ever."

In October 2001, a team of four conservators started reassembling the puzzle-like pieces. In the first step, they spread the fragments out across a 600-square-meter (6,500-square-foot) area in two large buildings. Over the next nine years, the conservators performed the painstaking and nerve-wracking work of constantly searching for pieces that fit together.

Roughly 30 sculptures have now been reconstructed. The idols, some of which consist of at least 1,000 fragments, are full of cracks and seams. Any gaps are now filled with plaster.

Once reassembled, the bulky monuments were attached to steel chains and lowered by crane through the ceiling windows of the Pergamon Museum. Taken together, they weigh roughly 30 metric tons (66,000 pounds).

The Louvre and the British Museum have also expressed interest in displaying the artifacts. But, as curator Lutz Martin explains, his colleagues there will first have to determine "whether their floors can support such heavy objects."

The Exotic Life of a Scholar, Diplomat and Bon Vivant

Without a doubt, this is a monumental exhibit. But the attraction lies not only in the figures themselves, but also in the man who discovered them.

Like Heinrich Schliemann, the German who discovered ancient Troy, Max von Oppenheim (1860-1946) was a self-taught archeologist. As the scion of the Jewish banking dynasty Salomon Oppenheim (his mother was from a patrician family in Cologne), Oppenheim grew up in the ostentatious world of the Belle Epoque. Indeed, his parents' estate near Bonn resembled an enchanted castle.

Max showed little interest in the law, the profession his father had chosen for him. Instead, he was drawn to the Orient.

In 1886, he traveled through Morocco, where conditions were practically medieval at the time. Wearing a disguise, he entered a mosque in Fez, despite the threat of being put to death if discovered. Later, he bought a Berber girl at a slave auction and was served the pickled heads of the local clan's enemies in a remote village.

His subsequent journeys took him as far as Iraq. In 1896, Oppenheim moved to Cairo, where he lived in a villa surrounded by palm trees, together with his gardener, Soliman, six servants and a French chef.

Oppenheim, who spoke fluent Arabic by now, stayed in tents with sheiks and, wearing turbans and robes, chatted with Druze princes.

Hired by the Kaiser

Given his colonial ambitions, Kaiser Wilhelm II needed people like Oppenheim, so he hired him to work at the German consulate in Egypt.

In addition to performing his diplomatic duties, the colorful banker's son collected 42,000 books and studied the customs of the Orient. His groundbreaking work on the history of the Bedouins was just recently rediscovered in Saudi Arabia.

Drawing on his father's deep pockets, the scholar hosted lavish "dancing festivals" in Cairo, where he received British ambassadors, Polish princesses and the American hotel tycoon John Jacob Astor (who later drowned when the Titanic sank). When Agatha Christie toured the Orient, it was still filled with legends of the fabulous wealth of "El Baron."

Another thing that contributed to Oppenheim's glamorous reputation was his many love affairs. Instead of marrying, he pursued the Islamic custom of taking "temporary wives," and he had a well-earned reputation for flirting and short-lived affairs.

In a Cairo bazaar in 1908, he had the audacity to approach a married Arab woman. As he described her in his memoirs, she was "very pretty, very young" and made her way to the steam baths with a "swinging, elastic gait," hidden behind a veil and guarded by a muscular eunuch. The affair ended in catastrophe when her husband discovered the affair and killed her.

Not surprisingly, Oppenheim had his share of enemies. A British diplomat once described him as "egoistic" and "chattering."

Amazing Discoveries in the Desert

The businesses Oppenheim pursued on the side were failures. His coffee plantation in Tanzania almost went bankrupt. The chairman of Deutsche Bank characterized his plans for an industrial zone near the planned Baghdad railroad as "drivel."

The German adventurer met with very little success in World War I, too. To this day, the British see him as a "master spy" because he founded the magazine El Jihad in 1914 in an effort to incite the Arabs to wage a holy war against the British and French occupiers in the Middle East. But his adversary Lawrence of Arabia, whom he knew personally, was far more successful at fomenting revolts.

Still, when it came to archeology, the baron did very little wrong. He hired the best architects, and he broke new ground in the way he documented his finds. He also spared no expense in excavating Tell Halaf, the site of a lost city on a hill.

In 1911, Oppenheim set out into the desert with 1,000 camels carrying 21 tons of expedition gear, including wagons and 800 meters of rail track. It had been an unusually harsh winter in northern Mesopotamia, and the stinking cadavers of animals littered the sand.

His excavation team included up to 500 Bedouins, as well as a doctor, cooks, a photographer and several skilled excavation experts.

Just beneath the surface, the excavators found stone sphinxes, lions and dark basalt panels bearing reliefs of ships, camels and club-wielding dignitaries. The reliefs had once adorned the "Western Palace" built long ago by a mysterious King Kapara.

While the excavations were underway, the dig's organizer sat in his expedition house outfitted with the finest carpets ("my desert palace"), working diligently at a large desk. And then, of course, there were the marauding locals he had to keep at bay.

With all of these distractions, it isn't surprising that he made a few mistakes. On one occasion, he coined the misleading term "temple palace," and on another he declared that Guzana belonged to a 5,000-year-old "culture of most ancient Mesopotamia" when half as many years would have sufficed.

But he could be forgiven for his blunders. German archeologists who have been working at the site since 2006 have also had trouble determining the age of the ruins, in part because of the paucity of objects bearing writings among the finds.

It is now clear that, like Jesus, the residents spoke Aramaic and lived through a prosperous era starting around 1,000 B.C. Ironically, it was during the "dark centuries," when the Assyrians, Greeks and Egyptians were faltering and the Hittite empire disintegrated completely, that Guzana's star began to shine.

A massive citadel was built there during this period, along with a palace surrounded by walls 10 meters (33 feet) high. The settlement lay next to a tributary of the Euphrates, which brought ships all the way to the Indian Ocean. The source of the city's wealth probably derived from the carved tusks of Mesopotamian elephants.

It wasn't until the Assyrians regained strength and began exacting tribute from their small neighbor that Guzana's prosperous times came to an end. The Western Palace was burned down during an uprising in 808 B.C.

Of course, when he first exposed the façade of the massive building, Oppenheim didn't know any of this. He soon found sacrificial vessels and gold jewelry.

Then World War I began, and the excavator returned to his luxury apartment on the Kurfürstendamm, Berlin's famous theater and upscale shopping boulevard. After his fortune melted away during the Great Depression, the "uncle from fairytale land" was forced to turn to his relatives in Cologne for help.

Nevertheless, despite being "destitute," as he phrased it, Oppenheim soon managed to close an unbelievable deal. In 1927, he returned to his "fairy tale land" and persuaded officials with the French Mandate of Syria, established by the League of Nations after World War I, to give him the finds from Tell Halaf.

Still, he never did get the gold jewelry, which somehow found its way to Istanbul. Even today, there are questions about its exact location. When the curators in Berlin asked Turkish officials to borrow the jewelry for the exhibit, they received nothing but prevarication. It's even possible that the glittering rings and brooches were stolen or lost through sheer negligence, but Lutz Martin, the curator, prefers not to comment on the matter.

Life under the Nazis

Oppenheim's life under the Nazis was hardly any less adventurous than before.

On Jan. 30, 1933, when Adolf Hitler was sworn in as Reich Chancellor and his supporters marched through the Brandenburg Gate in a torchlight procession, Oppenheim was sitting with the New York press magnate Cornelius Vanderbilt in a nearby dance hall. All of a sudden, half-drunk men burst into the establishment and shouted: "Jews out!"

It was a horrible signal, and one that would not leave Oppenheim unaffected. Indeed, the 1935 Nuremberg Laws on race classified him into a "half-breed of the first degree," a group occupying a gray zone between tolerance and persecution.

Oppenheim quickly felt the brunt of the brutal shift. Berlin's highest-ranking museum official scoffed at his family, saying it was a "Jewish contamination" of European nobility. But the official's real goal was to take all the credit for the treasures of Tell Halaf.

Despite these problems, Oppenheim still enjoyed good connections, and friends in the Foreign Ministry and the financial world protected him.

When the owner of a private bank used anti-Semitic slurs against him, Oppenheim challenged his rival to a duel with pistols and began practicing his marksmanship. The case eventually went before a Berlin court of honor, which ordered the banker to apologize.

Indeed, Oppenheim did everything he could to defend his legacy. In a speech before Nazi dignitaries, he went so far as to flatly ascribe his statues to the "Aryan" culture, and he even received support from the Nazi government.

In March 1939, a 78-year-old Oppenheim made his last trip to the Orient. Little is known of the trip, though the purpose was reportedly to resume his dig in Syria before his permit expired.

Still, there are some questions about whether there was more to it than that. The trip was paid for by a special fund administered by Hermann Göring, the head of Germany's air force and leading Nazi, who collected stolen paintings and antiques from all over Europe.

Once back in Germany, Oppenheim lived in Munich, where he witnessed the demise of the Third Reich in person. His finds had been bombed to bits in Berlin, and he had few treasures left to his name. Soon thereafter, in 1946, he died of old age.