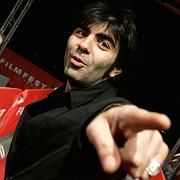 SPIEGEL: Fatih Akin, you have been compared with (legendary German film director) Rainer Werner Fassbinder for your new film, "The Edge of Heaven," which won the prize for best screenplay at the Cannes Film Festival and is now rumored to be an Oscar contender. Are you pleased?

Akin: The comparisons with Fassbinder have followed me around since my first film, "Short Sharp Shock." Critics said that the character Gabriel, who emerges from prison determined never to return to crime, reminded them of Franz Biberkopf in Fassbinder's "Berlin Alexanderplatz." It's funny, because I hadn't even seen the film at the time. I admire Fassbinder, but he and I work in very different ways.

Akin: (German actress) Hanna Schygulla once told me that Fassbinder forced his actors never to deviate from the script. But in my films everyone can do as he or she wishes. I like it when actors depart from the script to find their characters. Of course, that's also why it takes me three years to make a movie. Fassbinder would have been able to turn out 10 films in that amount of time.

SPIEGEL: In 1973, when Fassbinder shot his melodrama "Ali: Fear Eats the Soul," about a love affair between a Moroccan immigrant and a German cleaning woman, some in Germany were still referring to Turks as "foreign workers."

Akin: And SPIEGEL wrote at the time: "The Turks are coming -- save yourself if you can." I know, because I've researched it. It was in July 1973. I was born in Hamburg one month later.

SPIEGEL: And now you're here.

Akin: Exactly. And today we no longer tell our stories from the margins, but from the center of society.

SPIEGEL: And yet "The Edge of Heaven" describes, just as your film "Head-On" did, migration in exactly the opposite direction. Your characters leave Germany to go to Turkey. A Turkish-German professor of German Studies and a German student travel to Istanbul, for example.

Akin: Sure, why not? I feel incredibly comfortable here, and I also feel that it's my home. If the characters returned to Germany, perhaps the ending would be neater. But I like open endings.

SPIEGEL: Your characters are repeatedly drawn to Istanbul. Is it a city that you have a longing for?

Akin: That comes from my childhood, when my entire family made the trek by car down to Turkey. The trip took three or four days. When we arrived in Istanbul, I felt like I had traveled halfway around the earth and had landed in a completely different world. Nowadays Istanbul is much closer, and so it's no longer a place I miss so much. But it is a city where everything is constantly in motion. "The Edge of Heaven" deals with a lesbian love affair between a Turkish and a German woman.

SPIEGEL: Do you see yourself as a role model of Turkish emancipation?

Akin: No, although I do like the fact that people in Turkey are proud of me. On the other hand, I haven't done anything yet that portrays Turkey in a bad light. I haven't burned any bridges the way (Turkish author and Nobel Prize winner) Orhan Pamuk did. Maybe it'll happen someday, or perhaps Turkey will change enough so that burning bridges is no longer possible.

SPIEGEL: But is it possible that you actually portray Turkey in too positive a light? For example, you depict a women's prison with brightly lit, spacious group cells and inmates enjoying a game of volleyball in the prison yard.

Akin: We did a lot of research in Turkish prisons. I was keenly aware of the fact that I couldn't afford any inaccuracies. I wanted my work to be unassailable, and for that reason I had many conversations with friends of mine who were in fact imprisoned in Turkey for political reasons. We ended up shooting the scene in a prison in Istanbul for people being held on remand. What you see in the film are real prisoners and real guards. We didn't try to make Turkey more attractive than it is.

SPIEGEL: Does Turkey demand different images from you than Germany does?

Akin: Absolutely. I shot many scenes of Hamburg, albums full of postcard motifs, and I discarded almost all of them. I ride my bike through Hamburg every day. I go shopping here, I go to the doctor -- and yet I no longer have the eye for telling stories about this damn city, even though I love it. But in Turkey I have the feeling that I'm seeing everything with different eyes.

SPIEGEL: In "The Edge of Heaven," you tell the story of a lesbian love affair between a German and a Turkish woman. How did your parents feel about it?

Akin: Oh, they know what sort of a son they have by now. Why two women? Because everything else felt like a cliché. A young, dark-haired Turk comes to Hamburg, where he falls in love with an innocent blonde? No, that's too much like King Kong and the white woman. The story only became sexy once two women were involved.

SPIEGEL: Do you plan to tell a German-Turkish story again in your next film?

Akin: No, all roads lead to America. I'm planning a film about European immigrants who went to the United States in the early 20th century. We want to reconstruct Ellis Island in (the Potsdam film studio) Babelsberg. But after New York we'll be going to the Southwest. There will even be Indians. It'll be my first Western.