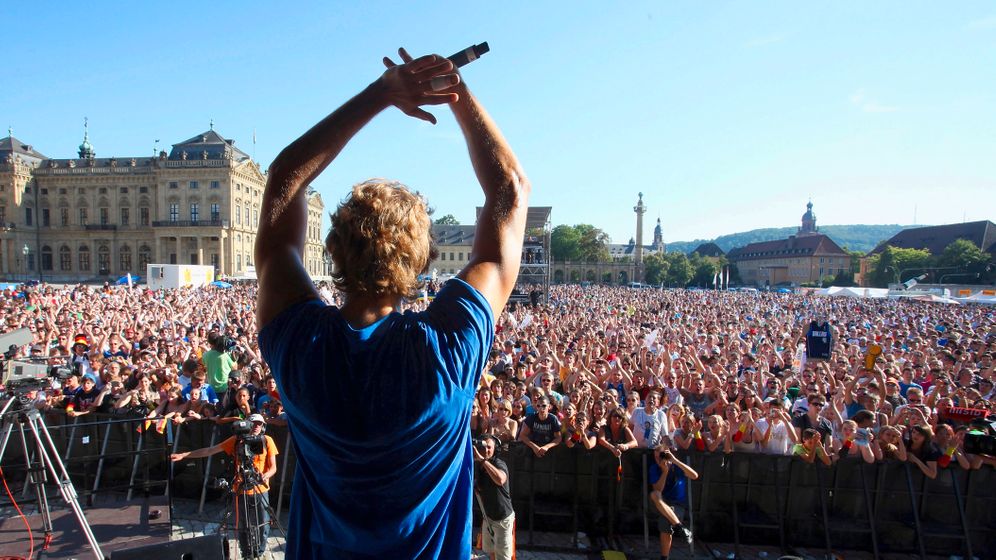 SPIEGEL: Mr. Nowitzki, you are sitting here in the city hall of Würzburg and there are 10,000 fans of yours waiting outside. How does a shy person like yourself react to such a reception?

Nowitzki: It is a nice feeling. But it all seems so unreal to me. Since the final whistle in the last final game against Miami, my life seems to be rushing past -- party, parade, party, parade. I can't do it for much longer. I am experiencing it all for the second time within just a few days -- first in America and now in Germany.

SPIEGEL: Which of the two worlds do you feel closer to?

Nowitzki: It feels different. Of course it fills me with pride to hear that fans in Germany got up at 2 a.m. to watch our games and that they celebrated the championship in my hometown of Würzburg as if Germany had just won the football World Cup.

Nowitzki: But soon I will have lived in America for 13 years. At the beginning I was condescended to and laughed at. "The nice boy from Germany will never make it," people said. Still, I never gave up. Now, I have been celebrated by 250,000 people in Dallas at the championship parade. That was an unbelievably intense feeling. I trembled.

SPIEGEL: You are now a German-American idol.

Nowitzki: To be honest, I slowly have the feeling that I'm not cut out for such moments.

Nowitzki: Well, at the very least I don't behave terribly competently. I feel ashamed when the entire focus is on me. I think people can see that. In public appearances, I am stiff as a board.

SPIEGEL: You were chosen as the most valuable player of the finals. The fans see you as the player who led the Dallas Mavericks to the title. Does the sudden affection of American fans make you uncomfortable?

Nowitzki: I don't think that I played all that exceptionally in the finals. If we hadn't played so well together as a team, it would have been disastrous. When the whistle blew to end the sixth and decisive game, blood rushed to my head. Without even thinking about what I was doing, I ran toward the locker room.

SPIEGEL: The game was still going on when you fled. There were still a couple of seconds on the clock.

Nowitzki: I only know that many of our PR people ran after me. They yelled: "Stay here. You can't do that. The trophy is going to be presented." I said: "I don't want it." I got into the shower, pressed my face into a towel and began to cry. Then I heard them yelling again. "Dirk!" I said: "They should give it to someone else." Not exactly worthy of a champion, is it?

SPIEGEL: After you calmed down, you received the trophy as a team captain should.

SPIEGEL: US President Barack Obama, himself a big basketball fan, later congratulated you.

Nowitzki: Mr. Obama called our coach Rick Carlisle shortly after the game. He invited the team to Washington. What he didn't know is that we already took part in a tour through the White House two years ago. At the time, he was busy in the Oval Office. This time, he won't be able to avoid us. No, seriously: The visit to Mr. Obama is an honor for us, a big deal. Not just because he knows about basketball.

Nowitzki: Because we can identify with him. When Barack Obama was inaugurated two-and-a-half years ago, we were getting ready for an away game. We delayed an extra practice so that we could watch his inaugural speech live on television. Everyone on the team was happy that he had made it.

Nowitzki: I consider myself to be more a universal kind of guy. When something grabs me, nationality doesn't matter. And the election of Barack Obama grabbed me. It wasn't a foregone conclusion that a black president would one day govern America.

SPIEGEL: The NBA is dominated by black players. Now you, a white player from the German middle class, have led your team to a championship. Some in the American media have compared your success to Obama's election victory. Can you see the parallels?

Nowitzki: Such comparisons are foreign to me. I don't think in categories of black and white.

SPIEGEL: Are you afraid of being turned into a symbol?

Nowitzki: Politics and sports are two distinct domains for me. That's how I was raised. And if I hadn't always adhered to that belief, I wouldn't be where I am today.

SPIEGEL: Is your new role as a role model for America too big?

Nowitzki: Not if it has only to do with my sport. Every young player can ask me for advice. I like giving guidance. It is this principle which guides me as the captain of the Mavericks. I am not the type to turn on music in the locker room or to hold long speeches. Others can play the clown. But I am always approachable, for everybody. Still, I'm also not going to play the big man and try to convert other players. Who knows if my way is the right one?

SPIEGEL: After your victory in the finals, US papers printed a photo-montage showing you as a nanny with black babies on your arm. The children bore the faces of star players like LeBron James and Dwyane Wade, among others, both of whom are known for their luxurious lifestyles. Is it now your duty to educate such players?

Nowitzki: Of course not. American basketball needs players like James and Wade, but the NBA also needs down-to-earth people like me. We players are all part of a show, and it only works in the long term if there is variety, when there is something there for everybody.

SPIEGEL: You have long been reserved when it comes to sponsoring gigs. Is that going to change in the future?

Nowitzki: There certainly isn't a shortage of offers. You wouldn't believe how many watch manufacturers have sent me their models. Just like that. I give them all away. I am satisfied with what I have. How crazy do you have to be when you can afford everything but still clutter up your life with all sorts of advertising appointments? No thanks.

SPIEGEL: Did any German politicians call to congratulate you?

Nowitzki: I think that (German Chancellor) Angela Merkel called my adviser. I'm not totally sure. But do you know what made me the happiest?

SPIEGEL: What was in it?

Nowitzki: A boxing glove with the inscription: "You are the greatest." Please don't ask me immediately about the political meaning of the gift. I was simply happy and sent Ali a golden basketball with a similar inscription.

SPIEGEL: At the end of August, the European basketball championships are beginning in Lithuania. Are you going to play for the German national team?

Nowitzki: It looks that way. Assuming that I finally get healthy. I have been carrying a flu bug around with me for four weeks. It makes no sense to play in the European championships if I am only halfway healthy. Neither for me nor for my team mates.

SPIEGEL: The tournament also serves as the qualification for the Olympic Games in London in 2012.

Nowitzki: And that's why I definitely want to play. I don't want to ruin the others' chances of participating in the Olympics. To qualify, we have to finish at least sixth at the European championships.

SPIEGEL: The NBA is currently experiencing a labor dispute and as yet, no agreement between the players and the owners has been reached. There is a real possibility that there will be no NBA season next year. There are rumors that you would consider playing in the German league in such a situation.

Nowitzki: Hopefully it won't come to that. I am certain that an agreement will be reached and that I will play another three or four years for the Mavericks at the highest level before I end my career in America.

SPIEGEL: You have a long season behind you. How are you going to get fit before the European championships?

Nowitzki: First of all, I am going on vacation together with my girlfriend. I am happy that she is at my side. I don't like being alone. I plan to occupy myself with things other than basketball, like drums, for example. It would be too bad if all the lessons that I have taken were wasted.

SPIEGEL: Do you play well?

Nowitzki: Well, it's difficult. You have to achieve a certain amount of motor independence when drumming. Your hands have to ignore what your feet are doing and you can't allow them to get in the way of each other. But if I could learn to do that, it would really help my basketball. If I had known that before, I would have taken up the drums much earlier.

SPIEGEL: Mr. Nowitzki, thank you very much for this interview.