He plays the hero in most legal thrillers -- the young, inexperienced lawyer who sits in a sad office with a secretary in the front room, often scatterbrained, sometimes vulgar or often both. At some point the phone always rings. It's an impossible case. Everyone says it's unwinnable -- the opponent is too powerful, too smart. But the young attorney takes it on, fights and wins -- catapulting it to the case of his career.

Ariane Bluttner doesn't know if the case against Tom Cruise will be the trial of her career. But it would be difficult for her to find a more famous person on the planet to go up against. Bluttner began her career as an attorney just 10 months ago. Up until now, she's taken on minor cases -- rent disputes, traffic accidents and tax discrepancies. The amount in dispute in the last case she took was a paltry €100.

Now the young attorney is planning a multimillion dollar case against United Artists, a film production company partly owned by Cruise. A lawyer who has only pleaded 15 cases in court is about to take on a goliath. It's the kind of story that Hollywood scripts are made of.

"I can't name the exact damages we are going to seek, but internally we are discussing the possibility of several million," soft-spoken Bluttner says. She's sitting at a small desk in her office and slowly and carefully considers her words, taking long pauses before answering questions. Bluttner works for the law firm Dr. Schmitz and Partners, located in an office on the less tony end of Berlin's grand shopping boulevard, the Ku'Damm. On this end of the street, the designer boutiques yield to car dealerships and the European equivalents of Applebees and Sizzler.

Cruise is currently in Berlin shooting "Rubicon," the Stauffenberg biopic formerly known as "Valkyrie." He's playing would be Hitler assassin Claus von Stauffenberg. Cruise, who recently became a part-owner of United Artists, is co-producing the film. During filming three weeks ago, 11 extras fell from the bed of a truck. Cruise wasn't on the set at the time. It was a Sunday and the actor had the day free. The extras, dressed in the uniforms of Nazi-era Wehrmacht soldiers, had to be treated after the accident and spent the night in the hospital.

Apparently one of them had seen some of those American legal thriller films. The next day, he called Arianne Bluttner. The man said he wanted to sue the film firm and he wanted to be paid damages -- American-style damages. He said he knew other injured extras and that together they were entitled to millions in damages.

In America, damage payment demands are often much higher than they are in Germany. The idea seems to be simple: Anyone who damages a person or thing must pay. It also sounds fair. Unfortunately, though, the system has a tendency to make people a little too greedy -- be they victims, family members, lawyers or, above all, if major corporations are involved. The process is only painful for these companies if it gets really expensive. For a company like United Artists -- which has films like "1900," "Rain Man," "Rocky" and "James Bond" under its belt -- that would take a lot of money. Cruise vehicle "Rubicon" alone is expected to cost $80 million to produce.

It would be easy to poke fun at the young attorney. She has fire-engine red hair that hasn't been cut in months, silly drawings of ducks cover the walls of her office and her law practice's Web site introduces "Ben" on its homepage. Ben is a mounted deer head and he even has his own e-mail address. Perhaps it's all just meant to show that even lawyers can have a sense of humor.

And perhaps Bluttner is just doing what any good lawyer would do in her situation. She's going to keep making a fuss until everyone has heard about it. So far, Hollywood hasn't responded to the charges, which has only served to further irritate Bluttner. She's placed ads searching for other victims on a special Web site, www.komparsen-vs-hollywood.de (Extras vs. Hollywood). And she says her clients have told her about other accidents involving extras, adding that her "main aim is to push for better safety standards on filmsets in Germany." The situation on filmsets is inhumane, with bruises, sprains and lacerations the order of the day, she claims. 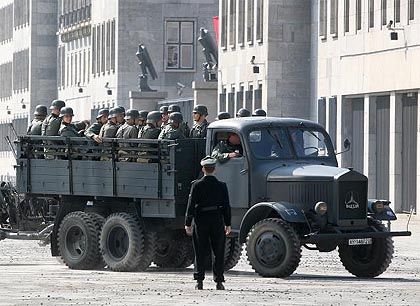 Two weeks ago, extras on the set of "Rubicon" were injured and taken to hospital after falling off this truck.

Indeed, if you sit down and listen to her for long enough, you might think that in the eyes of American film producers, Germany is seen as a kind of second or Third World Romania. And in many ways it is. Hollywood executives see Berlin as a place where you can film a whole lot cheaper than you can in the United States.

But Bluttner has little choice but to say these kinds of things. It takes years to bring a case to court in the US -- it's very expensive and it can never be considered a given than a court will take on the case. The first thing Bluttner has to do is somehow demonstrate malice on the part of the film production company -- otherwise it is protected by the waiver signed by the extras before filming.

That won't be an easy task for Bluttner, but she appears to be doing a good job of it. Nevertheless, a statement made this week by Berlin's state employment protection office is unlikely to help her case any. The office said there hadn't been significant safety problems on the set, citing testimony from other extras, and that the accident had been caused because the extras failed to properly shut the truck's tailgate. Robert Rath, who heads the agency, says the truck was safe and not a "jalopy," but his office still ordered the film company to install a fulltime safety manager on the set, the German news agency DPA is reporting.

Still, Bluttner is sticking with the case, she's tenacious and won't give up easily. She says she has found other witnesses who are prepared to testify "that everyone on the set knew that the vehicles were in terrible shape," and that extras playing Wehrmacht soldiers had repeatedly complained about loose parts on the flatbed truck.

At some point, it's even plausible that United Artists will grow so frustrated by all the bad publicity that it would just give the victims a payout. That, of course, would be a victory for Bluttner.

And it would also be a scene straight out of a Tom Cruise movie. There are few actors in Hollywood who look more the part of the lawyer than him. He's even played one twice -- in "The Firm" and "A Few Good Men." In both films he played an underdog, and in both he beat the odds against true goliaths. Now, Ariana Bluttner is playing his part.