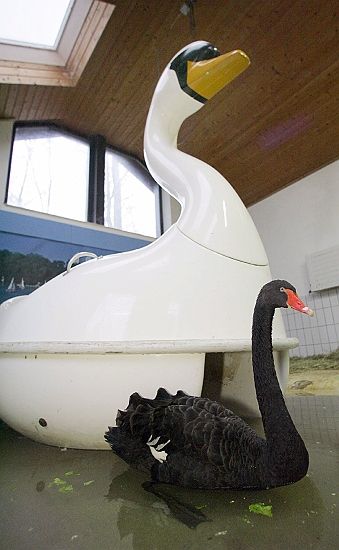 In a world of celebrity relationships gone bad, it's good to know that some limelight loves survive.

Take Petra, for example. Last year, the beautiful black swan from Münster in Germany made headlines across the world after she fell head-over-heels for a gigantic, swan-shaped pedal-boat. No matter what park officials at the Aasee lake tried, Petra would not be separated from her true love.

One year later, the couple is still together, with Petra having spent her summer blissfully following the boat as it was pedalled around the lake. What's more, Petra is getting a brand new, winterized hutch so she can spend the cold months near her oversized, plastic sweetheart as well.

Every year, the rental boats are brought in so they are not damaged as the lake freezes over. Last year, though, Petra was so distraught when she was separated from her boyfriend the boat that the two -- the real and the fake swan -- were given the use of a pond in the nearby zoo for the winter. And Petra was handed the keys to a mini-shelter normally used by one of the zoo's pelicans.

This year, Petra and the pedal boat will likewise spend the winter in the pond, but a new hutch for Petra means the pelican need not vacate its home. Moving day for the happy swan couple is Dec. 5, according to a zoo press release.

Next year, the folks at Aasee are hoping for a more permanent solution. As part of a shore refurbishment project, winter quarters for both the boat and its girlfriend are to be built -- directly on the lake shore.