It all started innocently enough. Back in the mid-1970s, Rita Breuer began collecting old German Christmas ornaments after her husband expressed the desire for a good old-fashioned Christmas tree like his grandmother used to have. Breuer, who hails from the small town of Olpe, 60 kilometers from Cologne, scoured flea markets and raided friends' attics in the search for baubles and came to accumulate quite a collection which included not only tree ornaments, but also Advent calendars, cribs and Christmas cards.

But then something strange happened. Breuer, who was now being helped in her quest by her daughter Judith, came across more and more objects that didn't fit with the usual peaceful image of Christmas, such as World War I-era miniature soldiers, bombs and hand grenades designed to hang on the tree. The Breuers started to get interested in how Christmas had been abused for propaganda purposes over the years, most blatantly by the Nazis. Their hobby turned into a full-fledged amateur research project. 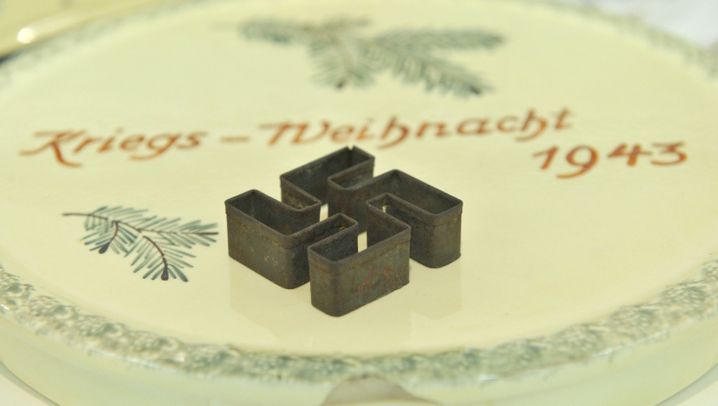 Now, more than 30 years after Rita Breuer first began collecting Christmas knickknacks, selected objects from the family collection have gone on show at the National Socialism Documentation Center in Cologne. The exhibition, which looks at the history of Christmas and propaganda from the 19th century until the present day, focuses on how the Nazis misused Christmas for their own foul purposes and tried to turn it into a "Germanic" winter solstice festival.

"Christmas was a provocation for the Nazis -- after all, the baby Jesus was a Jewish child," Judith Breuer, who helped prepare the exhibition and co-authored the accompanying book with her mother, told SPIEGEL ONLINE. "The most important celebration in the year didn't fit with their racist beliefs so they had to react, by trying to make it less Christian."

The exhibition, which includes such peculiar objects from the Breuers' massive collection as swastika-shaped cookie-cutters and Christmas tree baubles emblazoned with the Nazi symbol, shows the bizarre ways the Nazis came up with to try to take the Christ out of Christmas. They tried to persuade housewives to bake cookies in the shape of a sun wheel, a form similar to the swastika, and they attempted to replace the Christian figure of Saint Nicholas, who traditionally brings German children treats on Dec. 6, with the figure of Odin, the Norse god.

The Changing Face of Christmas

The exhibition also details how the Nazi approach to Christmas changed over the years. In the 1930s, their efforts were aimed mainly at changing the ideology of Christmas, Breuer explains. But when World War II started, the focus became more practical. The state encouraged those at home to send Christmas cards to the soldiers at the front and gave tips on how to make Christmas cookies in the face of food shortages. Then in 1944-1945, as the tide of the war turned against Germany, the Nazi apparatus tried to reinvent the festival once again as a day to commemorate the dead, in particular fallen soldiers. "By then nobody felt like celebrating," Breuer says.

However Breuer points out that, despite the Nazis' best efforts, habits among the population were not so easy to change. "People largely continued with the same traditions as before," she says.

But the legacy of the Nazi Christmas is more long-lasting than might be suspected. The Nazi-era version of the traditional Christmas carol "Es ist für uns eine Zeit angekommen" ("Unto us a time has come") is still sung in Germany today, for example. "The Nazis took out the references to Jesus and made it into a song about walking through the snow," Breuer says.

Of course the festival of Christmas has been largely secularized in much of the world over since the start of the 20th century, but the Nazi treatment was different. This had nothing to do with commercialism or growing secularism, but was based on their racist ideology and a yearning for a mythical Germanic past.

One particular sinister example of the Nazi Christmas tradition is the Julleuchter ("Yule lantern"), a kind of candlestick which can also be seen in the exhibition. Heinrich Himmler, head of the SS, had the supposedly "Germanic" lantern produced by inmates in the Dachau and Neuengamme concentration camps to give as a present to members of the SS. The same version of the Julleuchter that Himmler had made is still sold today in certain shops with a New Age bent as a traditional Christmas decoration.

And many of the myths that the Nazis invented are still circulating. "You can still read in places about how Christmas is really an ancient Germanic festival of the winter solstice," Breuer says, pointing out that there is little evidence of any such celebration.

One of the most surprising aspects of the Nazi hijacking of Christmas is the lack of reaction from the German churches at the time. "You would have expected them to protest loudly and insist that it was a Christian festival," says Breuer. "But instead they largely kept quiet, out of fear."

The exhibition "Von wegen Heilige Nacht! Weihnachten in der politischen Propaganda" ("Not Such a Holy Night: Christmas in Political Propaganda") can be seen at the National Socialism Documentation Center in Cologne until Jan. 17, 2010.