When the daily tabloid Bild, Germany's top-selling newspaper, hits the newsstands on Saturday, readers will be surprised to find that a 28-year mainstay -- the topless woman who has graced the paper's front page nearly every day since 1984 -- will no longer be there.

Bild, known as much for its "Page One Girl" as its sensational headlines, made the decision on Thursday, International Women's Day.

The Friday-morning edition of the paper featured the massive front-page headline "Bild Elimates Page One Girl," accompanied by an equally mammose last-ever Page One Girl, "the beautiful Eva from Poland."

According to Bild, the decision to scrap the tradition was made by male staff members during an International Women's Day experiment that saw the paper's women sent home and the men left to produce the paper alone.

Bild's men described the challenge in Apollo-mission terms: "It may be a small step for women. But it's a giant step for Bild and all men in Germany."

Still 'Sexy' Inside the Paper

Over the years, more than 5,000 topless women -- and the very rare "Page One Boy" -- have been shown on the paper's front page. They've occasionally been given the day off when pushed aside by major news, such as the day German Cardinal Joseph Ratzinger was chosen as pope in April 2005.

On Friday, however, the news of the ceremony marking President Christian Wulff's official exit from office was pushed to a small box on the side to make room for the Page One Girl announcement.

Still, fans of the feature will not be left completely breast-bereft. The paper has reassured its readers that it will continue to be "sexy," merely moving its fleshy photos to its inside pages.

According to Tobias Fröhlich, a spokesman for the paper's publisher Axel Springer AG, the decision to end the relationship with the Page One Girl was several years in the making.

"There's long been a discussion about whether it's still in keeping with the times," he said.

Likewise, Fröhlich is confident that the move will not hurt the paper's sales. "When the paper's in a kiosk, (the Page One Girl) is below the fold anyhow," he told SPIEGEL ONLINE. "In other words, it's not visible. When one goes to the kiosk, one sees the headlines, the eye-catcher."

"We're not worried," he added. 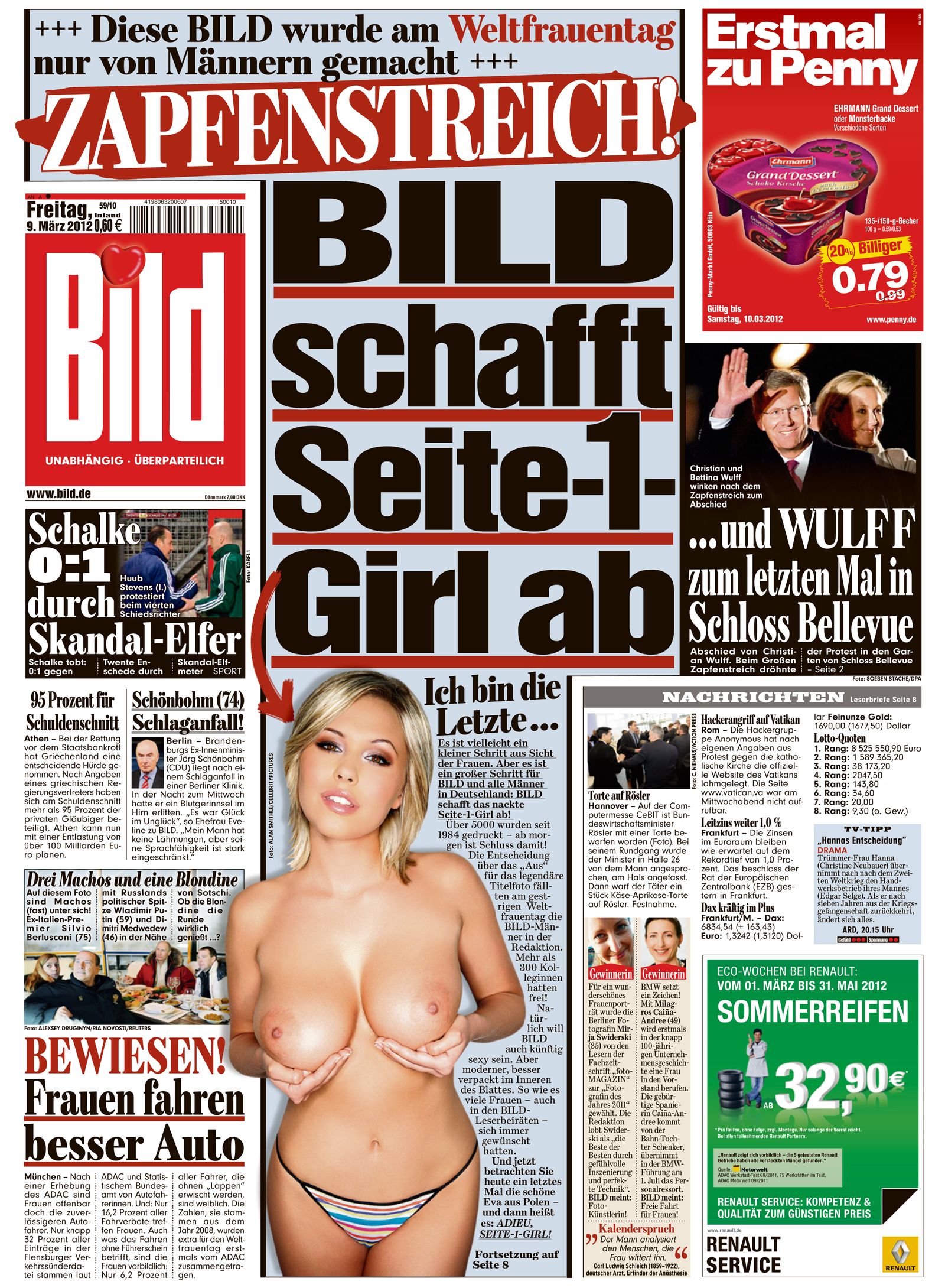 Germany's top-selling paper is getting rid of its page-one daily nude after 28 years.