With its exposed brick walls and floor-to-ceiling windows, the room could pass for the foyer of a boutique hotel -- were it not for the gleaming copper still that occupies pride of place along one wall. It is here that master distiller Cornelia Bohn is preparing another batch of malt whisky. Her distillery is not located in the remote Highlands of Scotland, however, but in the tiny village of Schönermark in the eastern German state of Brandenburg, about an hour's drive from Berlin.

Bohn is one of a growing number of Germans who are applying their considerable brewing and schnapps-making skills to the ancient Scottish art of single malt whisky. And they don't lack confidence when it comes to taking on the Scots at their own game.

"My whisky will reflect the open spaces and rolling hills of my countryside," says Bohn, who owns the Preussische Whisky distillery in Schönermark. "It will be a polarizing whisky, and it won't be everyone's darling."

Bohn, who is one of very few female whisky distillers in the world, began studying the art of whisky making in 2006. She got serious about her passion when she bought and renovated a decrepit 160-year old stable in her village and began making whisky. Her first single malt will hit the market at the end of 2012, after the necessary three-year maturation period.

The label on her bottle, whose name translates as "Prussian Whisky," shows a rearing black horse wearing a Prussian military helmet. The message is clear: This is a proud German whisky that is not trying to emulate its Scottish ancestors.

Bohn belongs to a group of around 40 malt-whisky makers in Germany, the most prominent of which are the Slyrs distillery in Bavaria and the Spreewald Brewery in Brandenburg. The Sloupisti single malt from the Spreewald Brewery was awarded the equivalent of an Oscar by the high priest of whisky, critic Jim Murray. He included it in the "superstar whiskies that give us all a reason to live" section of the 2010 edition of his "Whisky Bible."

The Slyrs distillery, founded in 1999, has been enjoying considerable success as a Bavarian single malt. Indeed, they have even had to limit their sales to one bottle per person to deal with the high demand. 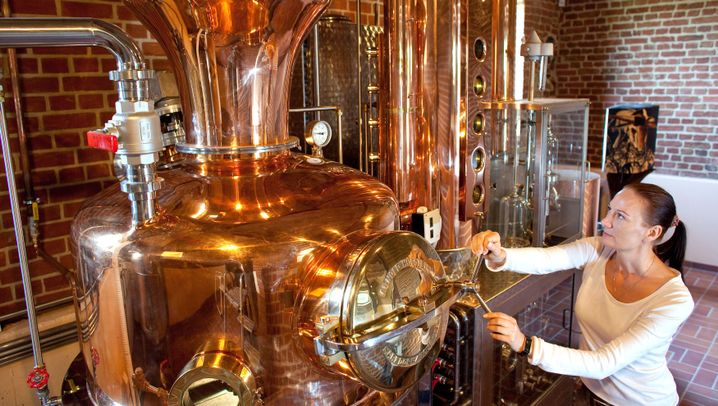 Andrea Stetter, one of the managing directors of Slyrs, admits there are many similarities between the Bavarians and the Scots: lederhosen and kilts, difficult dialects, beautiful countryside and a strong sense of local patriotism. But as far as taste goes, Slyrs is fundamentally different from Scotch, she argues. "Our process gives the whisky a mild, fruity taste," she says. "Unlike most traditional Scottish single malts, it can be drunk as soon as it is three years old."

German whisky makers cannot leverage the romance of wild, windswept glens to sell their products. But they do have a long history of brewing and schnapps-making to draw on, which stands them in good stead when it comes to the technical aspects. The fruit brandy stills used by many Germans for whisky are smaller than Scottish ones, producing a finer distillate that does not need to be stored for as long as Scottish malts. As a result, the liquid gold can get to market more quickly.

Armin Schüssler, publisher of the German newsletter Armond Dishers Whisky News, argues that it is pointless to make direct comparisons between German and Scottish malts. "German whiskies have performed extremely well in blind taste tests," he says. "And while real whisky lovers are primarily fans of Scotch, you can't compare a three-year-old German malt with a 12-year-old Scotch."

Distiller Cornelia Bohn feels that because the raw ingredients differ from country to country, the end results should be judged on their own merit, rather than being held up to the yardstick of Scotland. "German whisky will add a valuable new dimension to the market, rather than ousting another brand," she says.

Although single malt whisky can be made anywhere in the world, only the beverage made in Scotland may be called Scotch. Nevertheless, malts from other countries are becoming increasingly popular. Japan is currently one of the biggest global whisky producers, and critic Jim Murray chose the Amrut Fusion malt from India as the third best whisky in the world in his 2010 "Whisky Bible."

While Germany's malt-whisky makers are confident in their product, the whisky-drinking public are still slightly skeptical. After all, many whisky drinkers love Scotch's well-established associations of peat, heather and the Highlands. The lack of that kind of mystique could ultimately be a problem for young German whiskies.

"In 90 percent of cases, true whisky lovers, at least within Germany, are not really ready to embrace German malt whisky," says Theresia Lüning, one of the largest whisky retailers in Germany. She says that patriotism plays no part when it comes to purchasing decisions by German whisky drinkers. In Lüning's experience, there are three types of people who buy non-Scottish single malts: curious experts, one-off experimenters and schnapps lovers looking for something new.

The newcomers' image problem is echoed by Roland Hoppenheit, owner of the chic Saphire whisky bar in Berlin's fashionable Prenzlauer Berg neighborhood. "German malt whiskies are rather like orphans -- they lack identity and maybe a bit of heart," he says. "There seems to be a psychological barrier to buying non-Scottish whisky, in the form of the belief that there is no substitute for centuries of tradition."

Plus, German malts are not cheap. The Sloupisti single malt retails at €69 euros ($95) for a 0.7 liter (24 ounce) bottle -- around €30 more than an average Scotch. The German whiskies' high prices reflect not only the time and effort required to produce the spirit, but the fact that small production quantities do not allow for economies of scale. Only about 100,000 bottles of malt were produced in Germany in 2010 -- a drop in the ocean compared to the industrial quantities produced in Scotland, where a single distillery can make millions of liters of spirit each year.

But the German distillers believe that small is beautiful. "We are a very successful niche product," says Slyrs' Andrea Stetter, "and that's how we want to stay. Our philosophy is based on making a smaller amount of the highest quality."

The Sloupisti malt, which has existed since 2004, is in a similar situation. Demand is currently exceeding supply, with orders coming in from as far away as the US and Japan.

For Cornelia Bohn in Schönermark, the only thing that matters is that she can pursue her dream in the countryside that she loves. She describes whisky as a "leitmotif" running through her life. "I have found my pure passion," she says.

Correction: An earlier version of this article incorrectly identified Slyrs as the "first-ever Bavarian single malt." The first Bavarian malt whisky was not, however, made by the Slyrs distillery. The error has since been corrected.