The idea seemed harmless enough. In recent years, Austria's military has been having a hard time attracting young men to serve in the country's armed forces. Why not create a video, the army's marketing department presumably thought, that shows the sexy side of service?

Sexy. Sexist. It's a fine line. And the spot, which ends with four young women running screaming after a tank after being offered a "joy ride" -- double entendre intended -- by one of the soldiers manning the tank seems to have crossed that line.

"The video is trashy and an embarrassment," Judith Götz, who is in charge of feminist issues at the Austrian Students' Union, told SPIEGEL ONLINE. "It is totally archaic to show such an obviously sexist video at a time when women are already part of the Austrian military."

The apparently low-budget video, filmed on the shore of the Danube River, opens with a macho-looking man with legs spread wide sitting on the hood of his Audi surrounded by four young women. He is interrupted in his effort to persuade them to join him for a "joy ride" when a Leopard 2A4 tank bursts through a cloud of fog and comes to a screeching halt in front of the Audi.

A soldier climbs out of the tank's hatch, rubs his hand suggestively along the barrel of the cannon, jumps down in front of the girls and asks them if they would like to go for a "joy ride" in his vehicle, instead. The girls screech in excitement. "Then come to the Austrian army. Then you can drive a tank," the soldier says before speeding away. The shrieking girls run after the departing tank. And cut.

'So dorky it's brilliant'

The spot was made using amateur actors -- a local bouncer and four students studying at a nearby hotel management school. And it wasn't even an original idea: The Austrian army was inspired by a similar spot on the Web site of the Ukrainian Defense Ministry.

"Our clip is so dorky it's brilliant," Col. Johann Millonig, from the army's marketing department, told the Süddeutsche Zeitung.

On Thursday, though, the Austrian Ministry of Defense (and Sport) was on the defensive. "Of course we knew we were working with clichés," spokeswoman Ute Axmann told SPIEGEL ONLINE. "But we respect the feelings of our citizens."

And then Defense Minister Norbert Darabos asked the army to remove the video from the ministry's Web site, and Millonig was asked to refrain from speaking to the media about the video.

The Austrian army replaced the spot on Thursday with another one. The new video depicts a soldier making a mad dash so that he's not late for a rendezvous with a sexy young woman with long legs and high-heeled pumps.

"When it comes to gender equality, Austria still has a long way to go," Götz says. 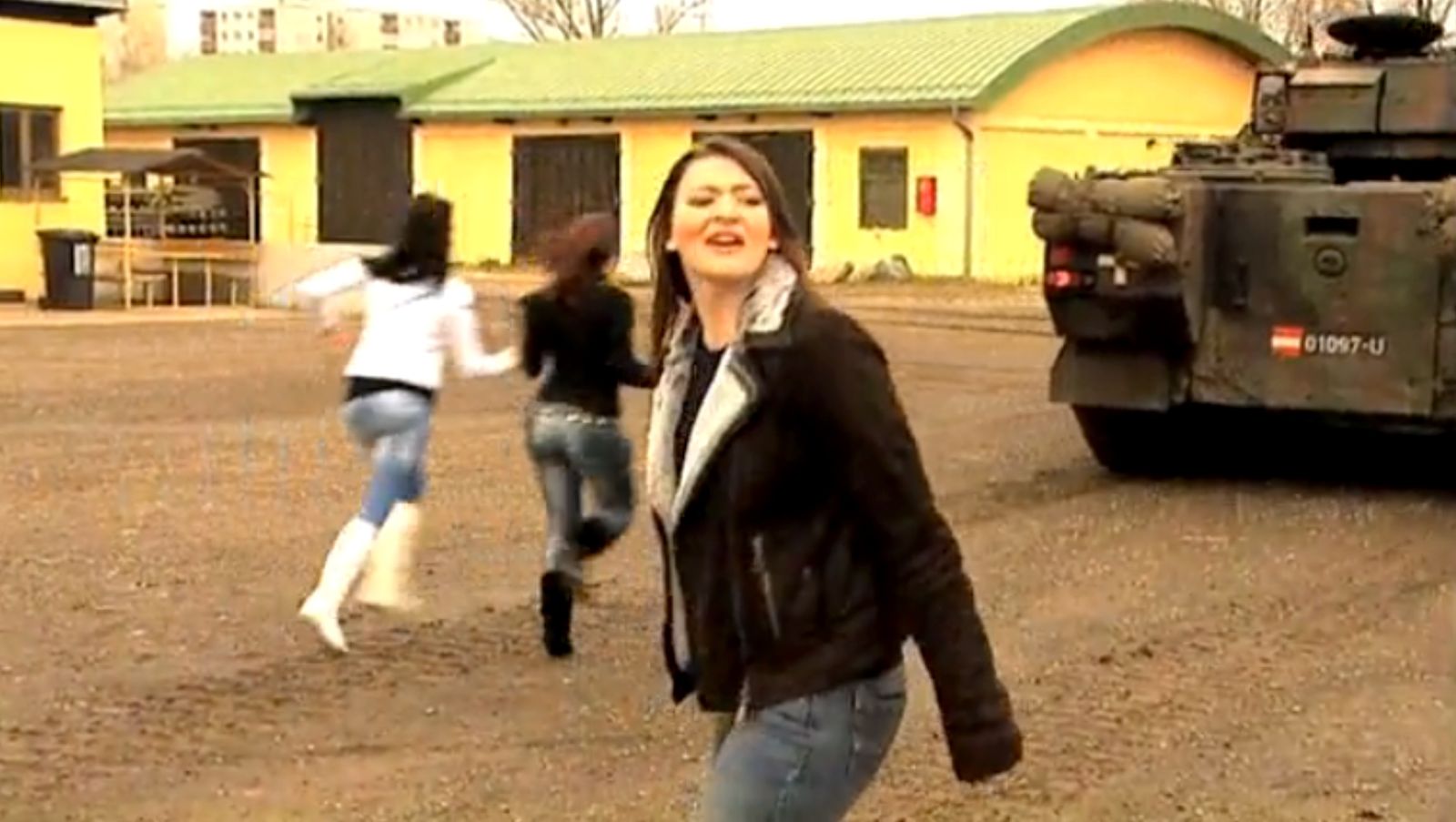 A still from the Austrian army video showing young women running after a departing tank in the hopes of going on a "joy ride."