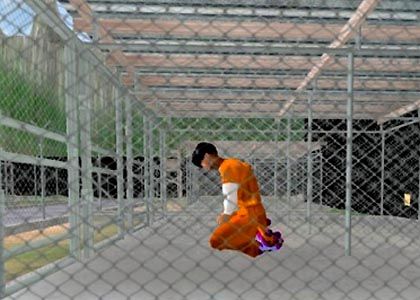 A screenshot of the "Gone Gitmo" game on Second Life: a continuation of the teach-in using new media.

They sit onboard an airplane with their hands and feet restrained. Black hoods have been pulled over their heads. Guards roughly push them around until they are delivered to a dog-pound-like area fenced in with barbed wire. Now it is time to wait. There is no formal indictment, no lawyer -- and no escape.

That is roughly what one plot in "Gone Gitmo," a digital recreation of life in the US prison camp in Guantánamo, looks like. "Gone Gitmo" is part of the online phantasy world Second Life.

A virtual penal camp in the midst of a hedonist dreamworld that lures hundreds of thousands of pleasure-seeking computer users by means of shopping malls and nudist beaches -- is that not tasteless? "On the contrary," says Nonny de la Peña, a California-based activist who was involved in developing the politically inflected game. "It's not our playworld that's a scandal, but the conditions inside the real Guantánamo."

De la Peña is documentary film director whose works are shown mainly at small festivals. She hopes the online gulag will help her to reach young Americans who prefer playing computer games to attending demonstrations. To her, the Guantánamo simulation is something like a new-media update of the traditional teach-in.

An entire gamut of so-called "serious games" is hitting computer stores this fall -- games that are serious, challenging and politically correct. The 3D strategy game "Global Conflicts: Palestine," for example, which goes on sale in mid-October, involves the player assuming the role of a journalist doing research in Israel and the Palestinian territories. The player-reporter's task is to find out what is fueling the conflict and whether Israeli security forces are reacting appropriately to terrorist attacks. Instead of hunting monsters or gunning down enemies, players need to assemble -- by mouseclick -- a halfway plausible report on the basis of a plethora of mutually contradictory sources.

"Of course it's a game for a niche market," says Simon Egenfeldt-Nielsen, a Copenhagen-based professor of media studies. "But the niche is growing rapidly. We hope to be able to sell the game to 1,000 schools and 30,000 private customers for use in political education."

The new genre is expanding. The conference "Games for Change" was held for the fourth time in New York in June. It's the kind of gathering that sees computer programmers, political science professors and even World Bank and United Nations employees talking with each other. 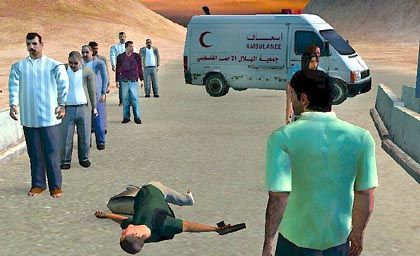 A screenshot from the political game "Global Conflicts: Palestine."

But many serious games still suffer from serious teething troubles. Sometimes they seem too trivial and sometimes as wooden as an interactive Sunday sermon. "Darfur is Dying," for example, invites players to imagine themselves as refugees in western Sudan forced to hide from the brutal Janjaweed militias. The game was developed at the University of Southern California with the support of firms such as Reebok and MTV. It is neither particularly exciting, nor does it shed light on the conflicts behind the genocide.

"Food Force," on the other hand, is considered one of the most successful political games. It is distributed free of charge by the UN World Food Progam and is not meant to shake people awake by means of shock effects; rather, it is designed to offer insight into the complex world of famine relief. The player's task is to reduce food scarcity on a fictitious island -- despite financial bottlenecks, enemy rebels and numerous practical constraints.

Germany's Federal Agency for Civic Education (BPB) is also introducing a computer game at this year's Frankfurt Book Fair. The game, called "Genius  In The Center of Power," was developed in cooperation with the textbook publisher Cornelsen and resembles a blend of the simulated civilizations of "SimCity" and Social Studies 101.

Players can take on the persona of a politician of their choice and then campaign for the offices of mayor or prime minister. Their success is measured by the degree to which they keep their campaign promises. "In this way, we want to convey a basic understanding of how democracy works," says Arne Busse, who is responsible for the development of political-educational games at BPB. Next, he is planning to develop games for young people with immigrant backgrounds.

Of course, not even the best software can substitute for political discussions; at best they can encourage such debates and provide them with facts. The virtual Guantánamo prison, for example, regularly transforms into an Internet lecture theater where legal experts explain the US Constitution.

"When I conduct a teach-in on Second Life, I'm able to show films, present documentaries and let eyewitnesses speak-- and I reach people all over the world," says the well-known and controversial Mark Denbeaux, 64, a law professor at Seton Hall University, in New Jersey. He also works as a lawyer for Guantánamo prisoners.

Denbeaux hopes to reach a wider audience by means of the seminars he presents in the pixel-prison: "The pioneer spirit on the Internet," he says, "almost reminds me of the rallies held by the civil rights movement in the 1960s."

Editor's Note: All the Web sites mentioned in this story can be found online on this SPIEGEL Link List.