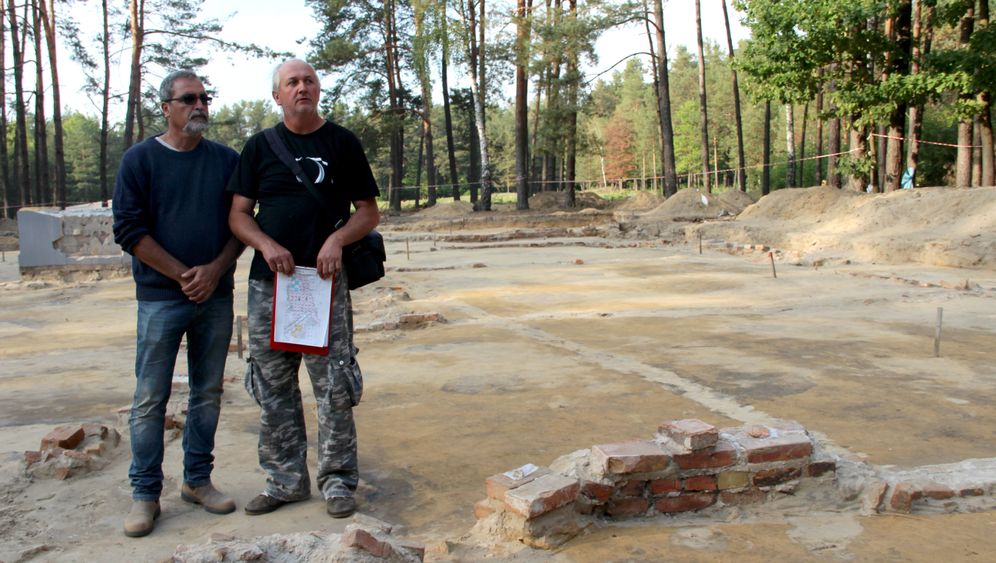 Photo Gallery: The Excavation of Sobibór

The remains of the killing machine are hidden deep in the forest. There's a smell of moss, trees creak in the wind and a deer scurries through the underbrush. The pine forest at the old Sobibór train station is a serene place on this September day. It's the site where Nazi SS officers and their henchmen once murdered tens of thousands of defenseless Jews and Roma. Smoke billowed out of the crematoriums for months.

Freshly uncovered foundations and remains of the walls can be seen in a clearing, the suspected remnants of four gas chambers. Each measures five by seven meters (16 feet by 23 feet) and served as death cells for 70 to 100 people at a time.

"This is where they forced the Jews in," says Yoram Haimi, pointing to the gap between the red bricks. "And that's probably where the motor was placed that fed exhaust fumes into the chambers, says Wojciech Mazurek. The two archeologists, from Israel and Poland, constantly interrupt each other out of excitement over the historical importance of their discovery.

In recent days, excavation work led by Haimi, 53, and Mazurek, 54, uncovered the remains of the gas chambers of Sobibór some 71 years after the Nazis destroyed the extermination camp where between 170,000 and 250,000 people were murdered. Haimi and Mazurek have found what the Nazis sought to cover up. Their find will help to make the atrocities committed at Sobibór become a more tangible reality.

In no other place did the Nazis perfect their killing machinery to the extent they did here in remote eastern Poland. Under the codename Operation Reinhardt, they planned three camps under the leadership of SS officials Odilo Globocnik and Christian Wirth -- Sobibór, Belzec and Treblinka. The camps had a single goal: to systematically liquidate every Jew in occupied Poland.

In contrast to Auschwitz, Sobibór, Belzec and Treblinka were extermination camps from day one, with very few of the new arrivals used in forced labor. The vast majority were sent directly from the freight trains to their deaths in the gas chambers using a cruelly elaborate logistical system. An estimate 1.4 million Jews from Poland, the Netherlands, Germany and other countries perished in the three camps, more than in Auschwitz-Birkenau, the concentration camp that became the symbol of industrialized mass murder.

And unlike Auschwitz, no barracks or mountains of glasses, shoes and human hair or visible remains of extermination facilities were left behind in Operation Reinhardt. In the middle of the war, the Nazi criminals made a point of eliminating any traces of their own after they had killed the Jews. Between November 1942 and December 1943, the Nazis exhumed bodes, killed almost all of the remaining prisoners at the three camps and burned any of the human remains still detectable.

The killers destroyed plans, documents and stripped the buildings down to their foundations, even carrying the rubble away. They leveled structures, planted forests and established farms. Operation Reinhardt was top-secret and it was meant to be the perfect crime.

The murderous apparatus proved extremely efficient. Around 30 SS officers and 120 Eastern Europeans "volunteers," including John Demjankuk, the man convicted in Germany in 2011 for serving as a guard at the camp, were sufficient for the murder of 170,000 to 250,000 Jews in Sobibór. The only people who survived the war from the camp were 50 who broke out during an insurgency. In Treblinka, close to 800,000 people were murdered, with only 60 survivors. In Belzec, where more than 430,000 people were killed, a mere eight survived.

This has contributed to the fact that Sobibór is far less known, and far less infamous, than Auschwitz. There are manifest reasons for this, including the fact that there were fewer witnesses to share their stories and because fewer photos have been found documenting the three death camps. Also because not a single gas chamber had been uncovered until the finding in Sobibór this month.

At the excavation sites, Polish workers cautiously shovel the sand into wheel barrows.

Most of the work here is being done by hand. Haimi and Mazurek say the danger was too great that machines would destroy the fragile remnants of the walls or that important objects might be lost. The two archeologists have been researching Sobibór for years. Previously, they excavated the remains of the platform where the deported Jews arrived. They also discovered an escape tunnel that had been started as well as a Himmelfahrtsstrasse, or "road to heaven," as the perpetrators cynically referred to the 230-meter long path that naked Jews were told to take after getting their hair cut, allegedly to the place where they were to take a shower.

'I Always Suspected They Were Here'

The archeologists have now laid open the sites of the gas chambers, located just a few steps away from the old memorial to the victims, hidden under a thick layer of asphalt. "I always suspected they were here," Haimi says.

The Israeli came to the Sobibór site for the first time in April 2007 as a visitor. He traveled here to pay honor to his uncle, who was killed in the camp. "The museum was closed at the time," he recalls. "You could see memorials, but nothing that showed how and where the murders took place." He says the memorial site struck him as "abstract," and that there were few other people around.

While visiting, the archeologist, who had specialized in Israel in the excavation of Neolithic Age sites, decided he would undertake the search for the ruins of Sobibór himself. He soon found an enthusiastic partner for the endeavor -- Mazrek of Poland. Both sought out private donors to sponsor the project and convinced Sobibór administration officials to grant permission for the excavations. Then they began digging -- at their own risk for the first three years.

At the time, people were starting to forget about Sobibór, just as they had after the war. Justice officials had marked the approximate site of the gas chambers during a war crimes trial in 1946, but the Jews were unpopular with many Poles and the Communist government had little interest in making an issue of their extermination, despite the fact that they had once shaped life in the area.

This includes cities like Wlodawa, the district in which Sobibór was located, which had more than 5,000 Jewish residents before the war. Mazurek says that only two Jewish families live here today. "Even today, they don't profess their faith," he says.

For two decades, it was mostly farmers and lumberjacks who used the property. During the 1960s, officials erected a memorial and a symbolic mausoleum and the site was tarred over. "It was a very fortunate development," Mazurek says, "Because it protected the foundations of the gas chambers."

In 2010, the archeologists discovered remains of a double fence that encircled the camp and, one year later, the Himmelfahrtsstrasse. "It was pretty clear to us that the gas chambers would be at the end of it," Haimi says. But they hadn't found them yet. The memorial was then faced with closure because of a lack of funding. All the visitor facilities had to be closed temporarily until the Foundation for Polish-German Reconciliation and the State Museum at Majdanek stepped in to take over responsibility for the site.

Haimi and Mazurek resumed their excavations and found the remains of fences, barracks and crematoriums as well as several skeletons. They began to narrow down the search area. Finally, the rabbi of Warsaw gave permission for the removal of the asphalt above the suspected grave.

They finally reached their goal on Sept. 8, when the archeologists uncovered the remains of a red brick wall and, soon after, the next ones. "Both of us looked at it at the same time and smiled," Mazurek says. "We knew we had succeeded."

The archeologists still don't have final proof that these are the gas chamber foundations, but everything suggests that they are -- the position between the Himmelfahrtstrasse, the crematorium and the remains of the barracks of the Sonderkommando -- the mostly-Jewish prisoners responsible for removing the bodies -- as well as a water hole. Last Wednesday, experts from Auschwitz visited the site. "They immediately said, 'That's it'," says Haimi.

The next day, the news about Sobibór made headlines around the world. David Silberklang, a historian at the International Institute for Holocaust Research at Yad Vashem in Jerusalem, told Israeli daily Haaretz the discovery is a "most important finding in the study of the Holocaust." He says it will make it easier to more precisely estimate the number of victims and to have better knowledge of how people were murdered in the camp. "All of a sudden out of the ruins, from under the asphalt, come voices of Jews who are speaking to us."

In some spots, the archeologists are continuing to sift every shovel of sand by hand. By doing so, they are not only able to uncover remains of the killing machine, but also traces of Jewish life, like a small amulet found with the Star of David, a wedding ring engraved with an inscription or a metal nametag with the name and birthdate of Lea Judith de la Penha of Amsterdam, who was six years old at the time she arrived in Sobibór.

After its discovery, a Dutch broadcaster produced a documentary film about the girl and her family. In their research they also obtained photos showing the girl with loved ones in front of a decorated Christmas tree. Indeed, the work has given a face to Sobibór's dead.

"It's a victory, not only for us survivors, but for humanity," Sobibór survivor Philip Bialowitz told SPIEGEL ONLINE. The 84 year old, who broke out of the concentration camp during a revolt on Oct. 14, 1942 (click here to read an interview with Bialowitz), is one of six or seven former prisoners of the camp who are still alive today. Amsterdam's Sobibór Foundation reported that one Sobibór survivor died last week in New Zealand. Soon there will no longer be any witnesses left who can report on the horrors that took place at Sobibór, Belzec and Treblinka. This makes the new findings even more important. "People want authenticity," says Haimi.

An Open Field of Bodies

A few dozen steps away from the excavations, the archeologists kneels down to the ground and lifts small white fragments filled with holes. "These are all bone fragments -- there was a crematorium here," he says. "When they are entirely white, it shows the fire was especially hot." Even today, Sobibór remains an open field of bodies.

Next year, construction is slated to begin here on a new, €7 million memorial surrounding the foundations. After an extended tug of war, the governments of Poland, the Netherlands and Germany will be providing financing. Under Germany's previous government, there had been a debate about whether to participate, but Chancellor Angela Merkel's new administration recently gave the green light -- and none too soon. Last year, a statement made by a senior official in the German Foreign Ministry underscored just how little is known about Sobibór, despite the scale of war crimes committed here. The official said that no Germans had been among the prisoners at the death camp, but in truth several thousand German Jews were murdered there.

Even in the Poland of today, life still isn't great for Jews, as Wojciech Mazurek has discovered. After the discovery of the gas chambers, he visited one of the two Jewish families living in Wlodowa an invited them to visit Sobibór. The family politely declined, saying they didn't want to expose themselves as being Jewish to their fellow residents in the community. 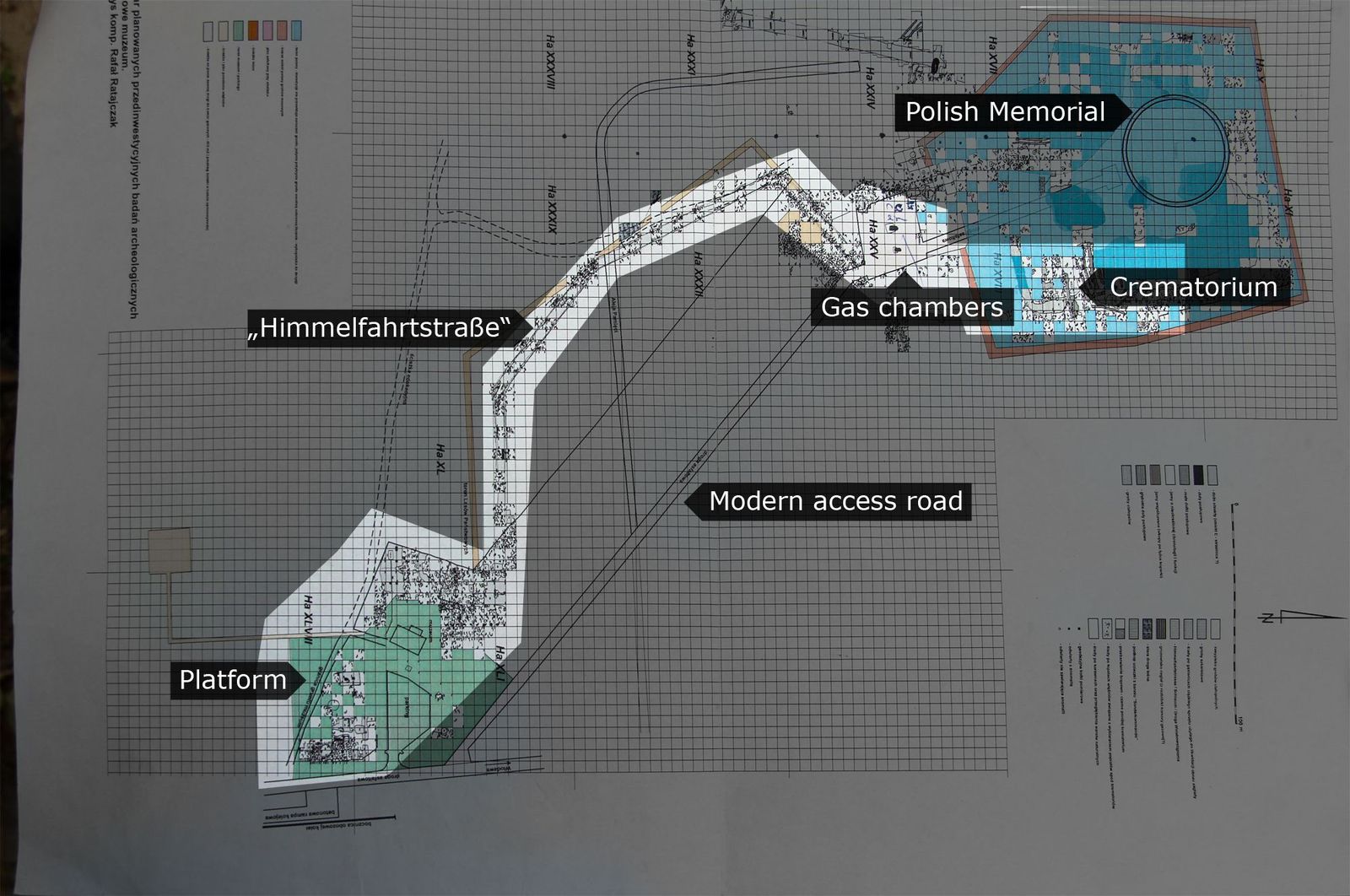 A map of the Sobibór death camp created by the archeologists 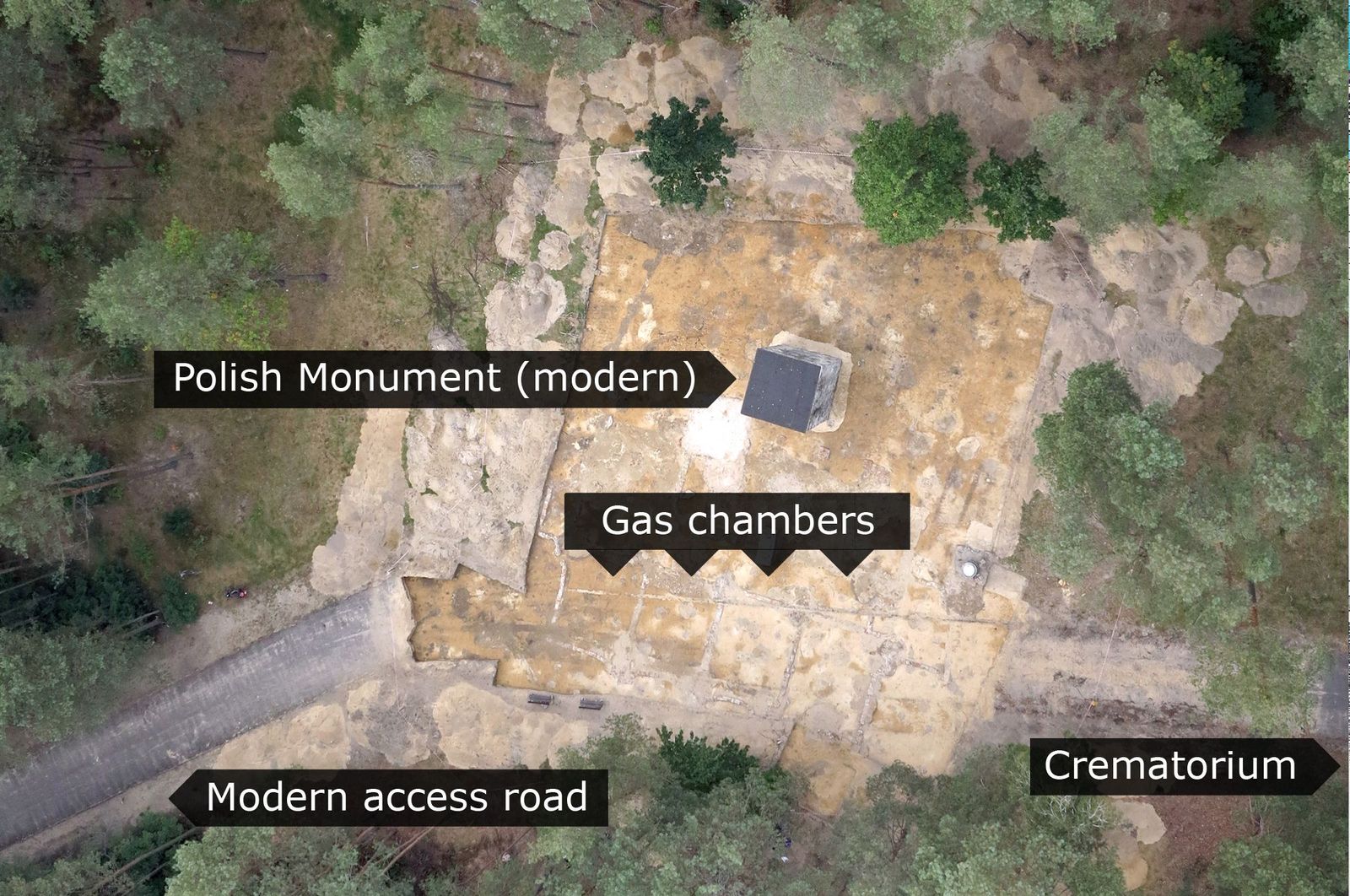 An aerial view of the site of the gas chambers 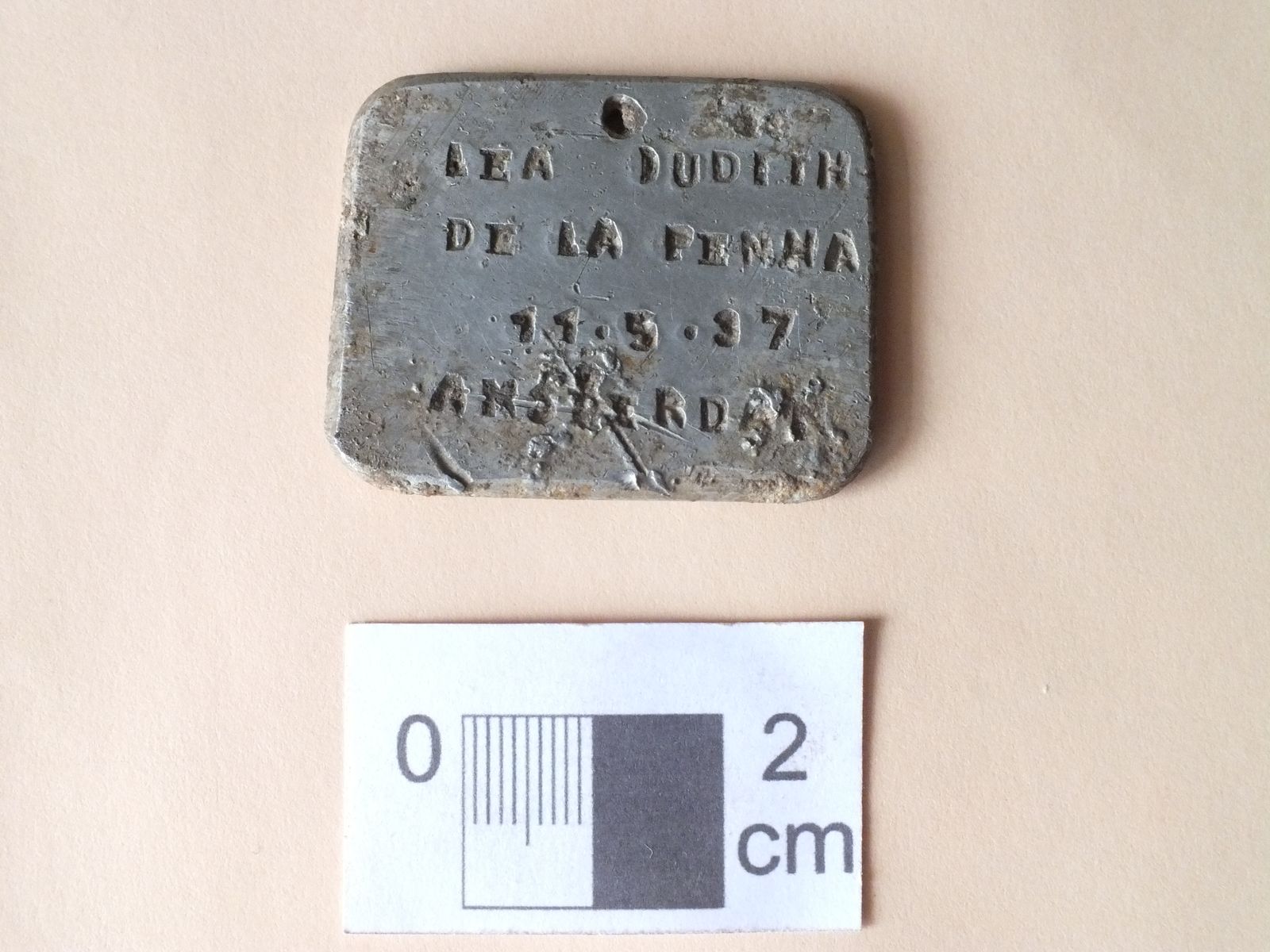