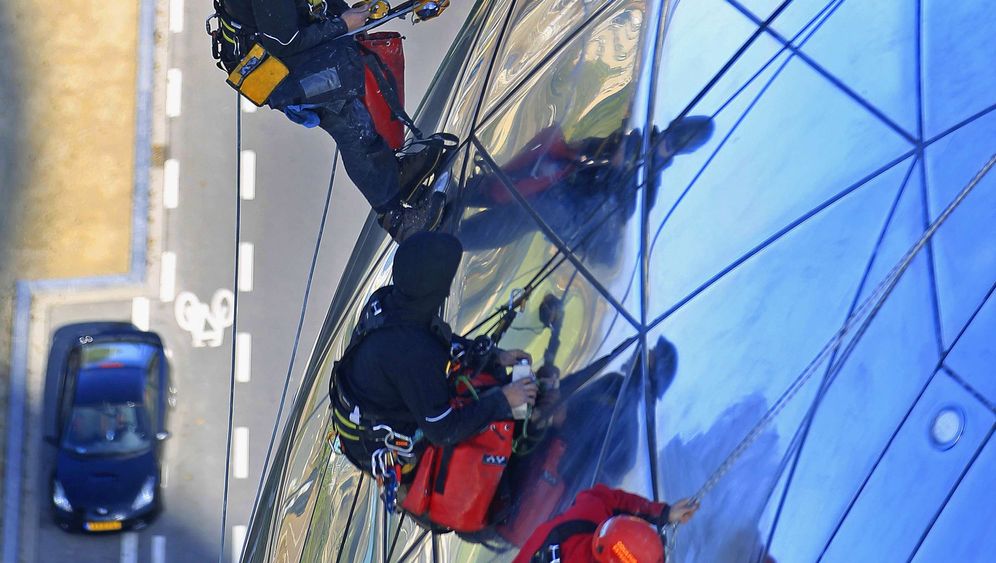 How difficult would it be to clean a 165-billion-times-life-size replica of a crystalline iron molecule? That was never a question that architects or planners for the 1958 World's Fair in Brussels bothered to ask when deciding to build the Atomium. The 102 meter (335 foot) tall monument was supposed to be dismantled and removed once Expo 58 was over. Instead, the Atomium joined the Manneken Pis as a symbol for Brussels, and in 2008, the landmark celebrated its 50th anniversary.

And these days, thanks to a multi-million euro restoration in 2006, the Atomium is shinier than ever. The refurbishment involved replacing the more than 6,000 metal plates on the monument, and they must now be cleaned at least once a year.

"This time it was so dirty, that we had to polish each panel" in addition to cleaning them, Olivier Delecosse, a member of the cleaning team, told SPIEGEL. His team just finished the most recent scrub down last week. "For one of the balls, our team of five needs about three days, so with nine spheres, we were done after five weeks."

According to Belgian news reports, the Atomium's bath was made particularly difficult this year due to stains left by kerosene from planes passing overhead. The structure is located not far from Brussels airport and is roughly in line with one of its runways.

The complete cleaning process costs around €72,000 ($93,513). Each ball has a surface area of 1,000 square meters (10,760 square feet). A team of five specialists polishes the nine spheres by hand. Dressed in climbing gear and wielding a cleaning towel and sponge, the crew straps in to anchors on the stainless steel spheres with two cables, one for climbing and one for security.

"My mother is pretty worried about (my work) sometimes," Delecosse says. "But now she's proud of me, because the Atomium is so famous."

The independent cleaning crew works on contract and handles other projects that involve hard-to-reach places, like securing rock faces against avalanche and unclogging enormous cement tanks. Compared to the crew's other work, the Atomium is "harmless," Delecosse adds. "But, when you're cleaning the lower half of the spheres, you get serious muscle cramps."

The Atomium attracts around 600,000 visitors each year. The site's official guidebook terms the strange structure "the most Belgian of all buildings."