Question: Mr. Lubricht, do you remember the final days of April, 1986?

Lubricht: Not very well, to be honest. My children were very young, so my wife and I were of course quite concerned. But at the time, I didn't see the intensity of the catastrophe to the same degree I do today.

Question: How long have you been working on your Chernobyl project? 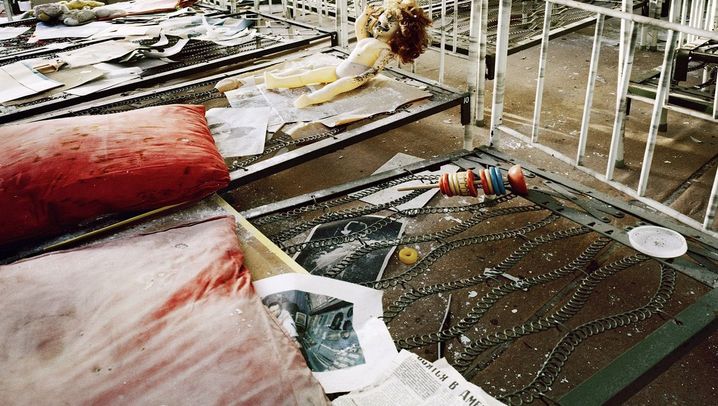 Lubricht: For six years. During my stay in Ukraine and Belarus, I could never stay in the Chernobyl exclusion zone for longer than a week, for health reasons. Travelling around the huge area also took up a lot of the time; I had to drive for thousands of kilometers in order to find victims in evacuated villages that aren't even on maps anymore. Often, there are just a couple of houses left, hidden in the forest. Many villages were levelled to the ground immediately following the disaster.

Question: What experiences have stuck most in your mind?

Lubricht: The abandoned villages and towns left a great impression on me -- especially in a Ukrainian city called Prypiat which is within the exclusion zone, which radiates 30 kilometers in all directions from the damaged reactor. It is hard looking at the traces left behind by the people who had three days to pack up and leave. Visiting the abandoned hospitals, kindergartens, schools and the classrooms, where children's pictures still hang on the wall and pens and textbooks lie scattered around -- it makes you ask yourself "My god, what could have happened that made people have to leave this place in such a hurry?"

Question: How do people in the region live today?

Lubricht: I was recently in Belarus where I visited some hospitals. You come across the few helpers that managed to survive and realize: Chernobyl is still not history. There are so-called clean regions in Belarus that were not hit by radioactive fallout in 1986, where people are now falling ill from diseases relating to the catastrophe. I have visited small towns and villages where people have told me that there isn't a single healthy child. Part of the reason is that fruits and vegetables are being grown in the exclusion zone again. There is hardly any clean food, even in the uncontaminated areas.

Question: How do people deal with this horrendous past?

Lubricht: People had a hard time with the forced relocation, particularly in Belarus. Prior to the accident, they had been living in their own villages, raising their own crops, when they were suddenly transferred to the city. Sooner or later the elderly just went back to their villages. They have their home and freedom back now and still grow their own food, as they used to in the past. And many of them are quite content -- partly because they were never adequately informed about the threat their environment poses to their health.

Question: Did you ever feel that your health was threatened during your work?

Lubricht: Yes, when I went to see the sarcophogus which now covers the damaged reactor. There I was standing face to face with something that had massively influenced world history. The closer I got to the reactor within the 30 kilometer radius of the exclusion zone, the more unsettled I felt. You just don't know how much radiation is still there and whether you are in danger. I physically felt the radioactivity: There was this peculiar iron taste in my mouth and my tongue felt numb. I would never have thought tasting radioactivity were possible. And not only in the exclusion zone around Chernobyl -- but also several kilometers away in Belarus.

Question: What was the result of your work at Chernobyl?

Lubricht: A documentary work with a strong, conceptual thrust. I am an architectural photographer and so I use a large format camera with a tripod. My images exude a sense of tranquillity.

Question: Is this project now finished?

Lubricht: No, I want to continue documenting for two or three more years. I am now conducting research on the liquidators -- the conscripts, firefighters and policemen who put out the fires and brought people to safety. Most have since died, but a few are still alive despite grievous health problems caused by the radiation. Almost no one takes care of them. I have already taken portraits of 10 of them, and hope to photograph 50 altogether. Their stories are crazy. I had originally intended to do 6 portraits a day, but I just can't manage it. I listen to their stories until I just can't take it anymore.