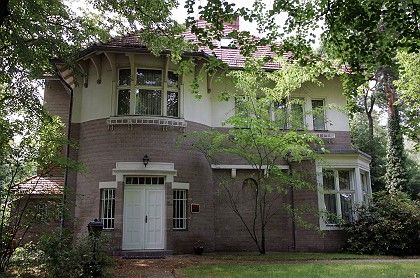 Tom Cruise has reportedly purchased the Palais Parkschloss villa in Berlin's Wannsee district, complete with its own helipad.

What to do on a beautiful, warm Berlin summer weekend? Most Berliners head for the beach bars on the Spree River or the lakes on the German capital's outskirts. But one of Berlin's newest residents, actor Tom Cruise, decided to shun the out-of-doors and, instead, paid a three-hour visit to the new Scientology center in Berlin.

Cruise is in town to scout filming locations for the upcoming Hollywood vehicle "Valkyrie," in which he will play Claus von Stauffenberg -- an instrumental figure in the failed assassination attempt on Adolf Hitler. He has also been spending plenty of time at the swanky schnitzelhaus Borchardt.

But it's the actor's religion that gets most in Germany to perk up their ears. The Church of Scientology is not recognized as a religion in Germany and is currently being officially monitored by Berlin's Office for the Protection of the Constitution. The city-state's interior minister, Ehrhart Körting of the Social Democrats has said that deceased Scientology founder L. Ron Hubbard's teachings are "irreconcilable" with the "constitution's view of human beings and the inviolability of the dignity of every person."

On early Sunday morning, Cruise and Holmes toured the Scientology facilities, taking in an exhibition on the history of the faith organization and also meeting with members, according to the local tabloid B.Z. am Sonntag. 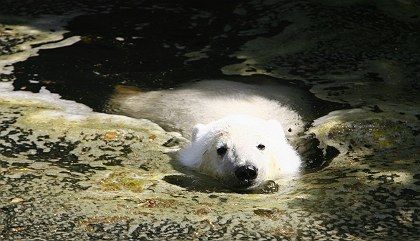 Suri Cruise seems to like ducks better than this cute polar bear.

So what do Stauffenberg's descendents think of a prominent Scientologist depicting their grandfather, a semi-hero in Germany after being executed by the Nazis for attempting to kill Hitler with two suitcase bombs on July 21, 1944? Grandson Caspar Graf von Stauffenberg, 41, told the Bild am Sonntag newspaper in March that he "didn't have any fundamental problem with a new film being made about his grandfather -- after all, this medium is good for explaining history." Nor is he bothered by the fact that Cruise is a Scientologist. "But it would bother me if the film were financed by Scientology in order to advance its propaganda," he said. "But we as the Stauffenberg family will not fight the film. After all, my grandfather was a historical figure."

Scientology and "Valkyrie," however, weren't the only items on the Cruise family's Berlin itinerary. Katie Holmes and one-year-old daughter Suri Cruise headed to the zoo for a private visit with the only celebrity in Germany who might be as well known as Tom Cruise: Knut the baby polar bear.

Holmes reportedly described Knut as "totally sweet." Suri, however, was less taken with the fluffy snow ball of a polar bear. "Suri was fascinated by ducks and chickens more than anything else," zoo curator Ragnar Kühne told the B.Z. paper. "She just babbled 'da, da'."