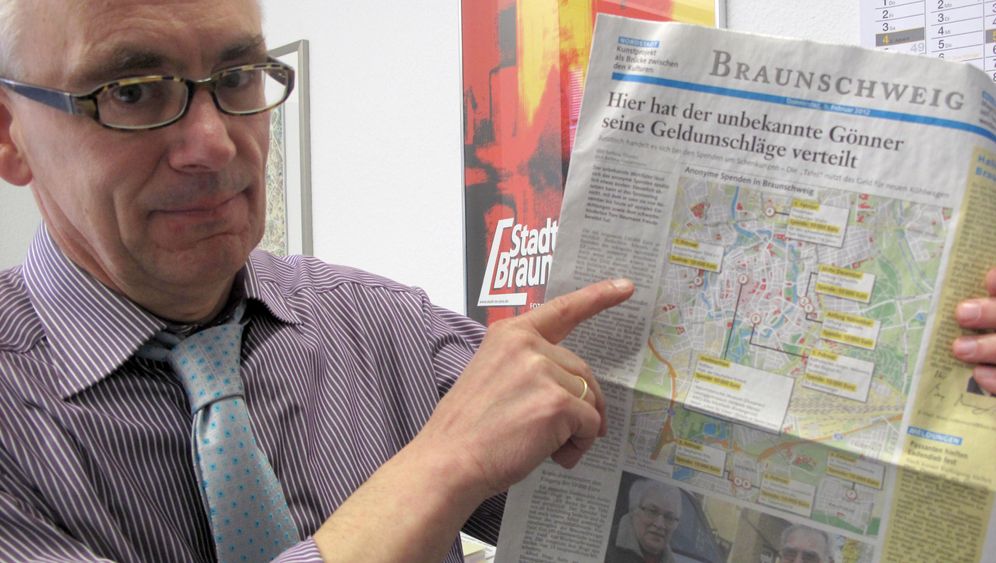 There are stories that are so good they are hard to believe. Henning Noske laughs when he hears such sentiments. A section editor with daily Braunschweiger Zeitung, Noske has been a journalist for thirty years and if there is one thing he knows, it's that a good story is a good story.

These are crazy times for Noske. His phone is constantly ringing with major German television stations seeking to speak with him. All because his little paper has been thrust into the limelight by a local story. "Every editor dreams of such a story!" says Noske.

It all started with an article about a local robbery. A short while later an envelope, sent by an anonymous donor, found its way to the local victim support center. The envelope contained €10,000 -- in cash. Twenty €500 notes.

Over the weekend, the anonymous giver made another donation. An intern at a local hospice found an envelope stuffed with €10,000 hidden under the doormat as she was taking out the garbage.

Even as a variety of organizations have benefited, all the donations have followed the same pattern. Each gift was placed in a white envelope and the donation has almost always been the same, though one was for €50,000. Furthermore, says Noske, "the money was often wrapped in an article from our paper." The weekend donation was accompanied by an article about the hospice that received the money.

Mystery of the Good Samaritan

The residents of Braunschweig are enthralled. Does the city, in the German state of Lower Saxony, have a guardian angel who, with a newspaper in hand, identifies those in need? A good Samaritan who roams the night with envelopes stuffed with cash?

On February 1, staff at the Braunschweiger Zeitung even found an envelope in their own offices. A reporter had written a feature about Tom, a local 14-year-old boy, who for seven years had been severely handicapped following a swimming accident. The piece described how the boy's family were dealing with the difficulties of caring for the boy.

A few days later, the receptionist opened an anonymous white envelope to find 20 €500 notes inside. A copy of the article about Tom accompanied the cash. What's more, the name of the family was underlined in the article: The money was clearly for Tom.

"I was driving when I heard the news," says Claudia Neumann, Tom's mother. "I had to park on the side of the road, I was speechless." Later she told her son that he had received a large sum of money from an unknown donor. Since his accident Tom can only communicate through a computer with a voice synthesizer. He clapped his hands in joy upon hearing the news.

Tom's parents want to use the money to improve the entrance to their house to make it more wheelchair-accessible. They also plan to enrol their son in a course of therapy that their insurance has refused to pay for. "For someone to act so selflessly, for this to happen in such an individualist society in which everyone thinks of himself," was astonishing, said Claudia Neumann.

Nobody knows who the benefactor is. "But of course such a thing captures your imagination," says Tom's mother. Her children suggested that it could be the doings of a modern-day Robin Hood -- someone who maybe steals from banks to share the money with the needy.

"Or it's an old person who is about to die," says Henning Noske. "We just don't know." The local paper, which now reports almost daily on the mystery, has decided to respect the donor's desire for anonymity and is not attempting to find his or her identity.

Recently, though, the paper has begun receiving requests for articles about various organizations in the hopes that a white envelope may be forthcoming. Even establishments in Bremen, some 170 kilometers away, have registered their desire to be reported. "That's not the way we work!" says Noske. "We will not allow ourselves to be instrumentalized -- we always follow the press code of conduct."

Legally, accepting the money is not a problem, as long as there is no indication of criminal activity.

By now, the mystery benefactor has shared out €190,000. He or she always puts the money in a post box, except for twice. Once, the money was hidden between hymn books and on the weekend it was found under a doormat. Hans-Jürgen Kropkow, a local priest, is among the recipients, having found €10,000 in his mailbox one day. "I'd never held so much money in my hand, it made me jittery," says Kropkow.

Most recipients of the white envelopes expressed their gratitude through the Braunschweiger Zeitung. Tom's mother is also planning on placing a thank you announcement in the paper.

"You know, every good journalist dreams of being able to make a difference!" says Noske. But in Braunschweig, a good Samaritan is making such dreams come true.