Julia and Christoph Lutz sat down for a four-course menu in the dining room of a luxury liner before the gig that night. "It was very classy," said the 35-year-old Julia, who sports dark hair down to her waist. Red Snapper, steamed vegetables and a glass of white wine, followed by cheese. Then, for dessert, a full blast of heavy metal.

"I got an autograph from Gamma Ray's lead singer after their show," boasted her 41-year-old husband, opening his sleeveless denim jacket covered in band patches to reveal a white scrawl on his black "Full Metal Cruise" t-shirt.

The married couple from Baden-Württemberg in southern Germany has left the mainland behind to enjoy the "biggest heavy metal cruise in Europe," as it's billed by organizers. It's a bit like Germany's famous heavy metal festival in Wacken, Schleswig-Holstein - except that it's at sea.

It's a strange idea, admits Christoph Lutz. A trained mechanic, he's been a afficionado of the metal scene for 20 years. "But I would never have thought of booking a cruise," he says. Nor would most of the other 1750 passengers on board. "We tend to be more alternative," he points out. 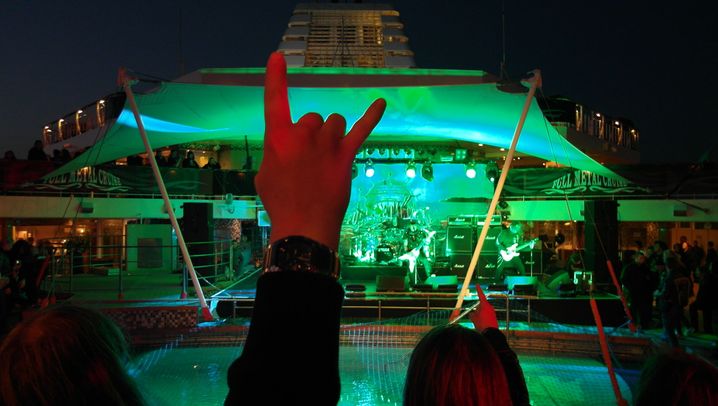 Twenty years ago, most cruise operators probably wouldn't have wanted them on board. Leather has never been exactly de rigeur on luxury cruise liners. But today, everyone's a potential customer for TUI Cruises and other tour operators, as long as they're solvent. "We are trying to attract a younger audience," Richard Vogel, president of TUI Cruises says. Themed cruises are a good way to start. German rock legend Udo Lindenberg got the ball rolling when he performed on the "Rockliner" and now the heavy metal bands appearing on the "Full Metal Cruise" could help make vacationing at sea more attractive to a wider public.

The all-inclusive holiday is the result of a co-operation between TUI and the organizers of the Wacken Open Air festival, which takes place every summer. It's a chance for head-bangers to trade in the muddy fields of northern Germany for the English Channel. After leaving the harbor in Hamburg, the ship heads towards Amsterdam and eventually docks in Le Havre. "I'm convinced that 10 percent of the passengers will book another TUI cruise in the future," Vogel says.

"A lot of metal fans make good money," says Holger Hübner, who has been organizing the Wacken Open Air festival since he founded it 23 years ago. The 3-day event can cost fans as much as €700 ($900), he says -- tickets and travel expenses, meals, T-Shirts, CDs and beer quickly add up. For a fee, comfort-conscious guests can even get their tent pitched for them, paying an additional €150 ($200) for their own personal Porta Potty. The 150 available private toilets are already booked out for this year's festival in July.

On board the cruise liner, there's a conspicuous lack of enthusiasm in his voice when Hübner talks about the event, suggesting that it's sold-out. The "Full Metal Cruise" program even advertises a Wacken credit card.

"If you want rebellion, the heavy metal scene is not the right place to look," says illustrator Tim Eckhorst from Kiel, who designs the Wacken Open Air festival posters. "Metal is a tough business today." It all boils down to profits.

It's also all about the bottom line on the "feel-good ship," as TUI advertises the luxury liner. Passengers pay €1400 ($1,800) per head, which includes concerts and meals, as well as a 24-hour supply of beer and piña coladas. But shore excursions, Pilates classes or a sexy make-over at the spa cost extra.

When the ship lands in Southampton, Julia and Christoph Lutz consider going ashore. Julia wouldn't mind doing some shopping. "These days, metal fans like us are facing the same dilemma as the Green Party," her husband says. "We come from a protest background but now we're part of the mainstream."

Many fans aboard the ship probably feel the same. They want to be different, but their lives have taken them in another direction -- up the English Channel on a 264-meter-long cruise ship, to be precise. When the concerts are over, these former rebels retreat to their 16-square-meter cabins, and in the morning, head to the breakfast room to eat eggs with bacon brought by Filipino waiters.

And they're enjoying themselves. The liner's range of activities didn't even need to be adapted much to accommodate the metal fans. The masseuses now offer a "neckbreaker massage," which -- according to the brochure -- gives new energy for the next riffs and blast beats. The spa room has been converted into a tattoo parlor, and most importantly, several stages have been erected between the two on-deck pools, so that bands can turn up their amps so loud they probably traumatize the North Sea shrimp. Apart from these few minor changes, everything is business as usual.

Some of the passengers are frustrated with how tame it all is. "It's too corporate for me," says 45-year-old Oliver Hoffman from Düsseldorf. It's 4 a.m. and he's out on the pool deck, venting his frustration about the packed program. "I could have done without the spa, the lectures, workshops and the live cooking show," he complains. "I booked a full metal cruise…. all I need is some AC/DC and some Iron Maiden."

He liked the metalcore band Heaven Shall Burn, he concedes, but thought Betontod and Santiano were useless. "The line-up is pretty pathetic," he says. He doesn't have much time for the other passengers, either. The fans on the "70.000 Tons of Metal" cruise that Hoffmann went on in the United States last year partied much harder, he sniffs.

A Way of Life

That's not to say there's no partying on the Full Metal Cruise. There's plenty of headbanging, pogo-ing and moshing going on. A group of twenty-somethings shoot beer cans across the deck as part of a drinking game, while revellers dive head first into the pool and spill their beer in the jacuzzi.

Jarkko Mattila from Finland isn't even here for the music. He's already had six glasses of champagne for breakfast. "For people from Scandinavia this is heaven," says Holger Hübner." The all-inclusive package is particularly appealing to them because alcohol is so expensive in Sweden and Norway."

"Ultimately, I'd rather pay a little more and drink better wine," Mattila admits. He's a chef in a restaurant in Tampere in southern Finland. He never normally goes on cruises, he says, but prefers to explore the world on his own. "I usually look for the best restaurant in a city and spend a fortune there."

He's been to the award winning restaurant Noma in Copenhagen several times and thinks the 12-course menu is well worth its €350 ($450) price tag. "That's the kind of luxury I love," he says. He can't imagine booking another cruise any time soon, but says it's an interesting experience and as long as the kitchen doesn't run out of liquor, he's not complaining.

Christoph Lutz isn't either. "I could imagine going on another cruise," he says. "Maybe to South America." But as far as he's concerned, heavy metal isn't just a hobby. "It's a way of life."