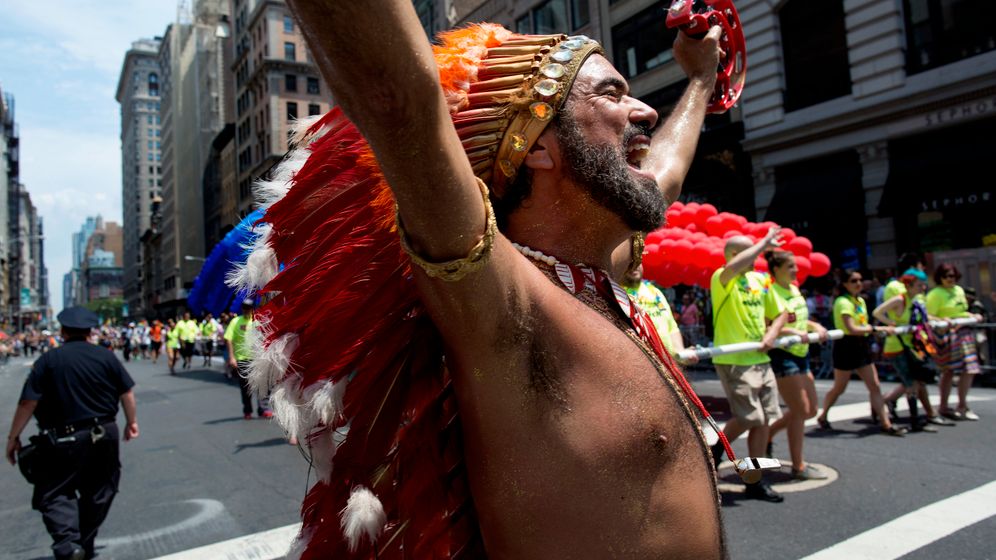 The dividing line between the West and the rest of the world could be seen clearly last Thursday, when it ran more or less precisely between US President Barack Obama and Senegalese President Macky Sall. The two leaders stood together and smiled for the press in the Senegalese capital of Dakar. Then someone asked a question about gay marriage.

Obama praised his country's Supreme Court for its historic ruling the previous day recognizing same-sex marriages at the federal level. The president declared this "a victory for American democracy" and called on the West African nation to allow homosexuals equal rights as well.

Sall promptly disagreed with Obama. Not only are homosexuals denied the right to marry in Senegal, but sex between men is in fact a crime there, as it is in around 30 African countries. "Senegal is a tolerant nation, yet it is not yet ready to legalize homosexuality," Sall said.

The two presidents' meeting was also a clash of cultures, one made all the more intense as Europe and the US find themselves undergoing rapid societal change. One number illustrates just how quickly this change is occurring: As of this August, 585 million people in the world will live in regions where true gay marriage exists, not just legally recognized same-sex partnerships. That's roughly twice as many as in August 2012. And just 12 years before that, at the turn of the millennium, gay marriage didn't exist anywhere in the world.

Fitting in with a Trend

Several countries have changed their laws just in the last half year. One example is France, which passed its "Marriage for All" legislation in May, despite massive protests by conservatives. Three American states, as well as New Zealand and Uruguay, have also joined the ranks in 2013. But it is Brazil's over 190 million inhabitants who account for the largest segment of that number. Although the ruling by the country's National Justice Council this May could potentially still be contested, as things stand now, it remains in effect.

The latest ruling from the Supreme Court in Washington fits right in with this trend. With a five to four majority, the court found the "Defense of Marriage Act" partially unconstitutional. That law declared same-sex marriages invalid for the purposes of federal authorities such as the Internal Revenue Service, even if the marriage in question was recognized in a specific US state. With the new ruling, gay and lesbian spouses receive the same tax breaks and can inherit from one another in the same way as heterosexual couples -- a bureaucratic detail with wide-reaching effects.

Hardly had the ruling been announced before former US President Bill Clinton became one of the first to speak out in its favor. In a joint statement with his wife, Hillary, both hailed this as an end to "discrimination" -- but apparently forgot to mention that it was Clinton himself who signed the Defense of Marriage Act in 1996.

Rarely has public opinion on a matter changed as quickly as it has on question of same-sex marriage. While 60 percent of Americans opposed it in 2005, today 55 percent are in favor. Politicians have barely been able to keep up with this rapid shift in opinion.

Obama, too, declared in his 2008 election campaign, "I believe marriage is between a man and a woman." Then, in May of last year, the president announced his views had been "going through an evolution" and he now supported marriage for same-sex couples.

In many countries, society's prevailing view has changed within the space of just a few years and the right of homosexuals to marriage, with all the financial advantages it entails, is now seen as a universal civil right. And in turn, the struggle for gay and lesbian rights, long an object of ridicule, has achieved the sort of strength once associated with the movement that brought about equal rights for African-Americans.

Just one day before its ruling on gay marriage, the Supreme Court issued another key ruling when it declared an important existing electoral law unconstitutional. The judges found that a section of the 1965 Voting Rights Act, originally implemented to prevent electoral discrimination against African-Americans, was no longer necessary. In other words, at the same time it decided American society had progressed to the point that African-Americans no longer needed the degree of special legislative protection necessary in the 1960s, the court was taking another minority, homosexuals, under the protection of the US Constitution.

The losers in this trend, in every country, are religious forces. In France, it was conservative Catholic circles, which have been a strong presence in the country for centuries, that demonstrated against President François Hollande's law legalizing gay marriage. But the resistance in France was directed at far more than just gay marriage -- it was also about fundamentally questioning the legitimacy of the country's Socialist president. This is the only way to explain the vehemence with which the movement expressed itself, when in fact surveys show that up to two thirds of French citizens support same-sex marriage.

Across Europe and the US, opponents of gay marriage are on the defensive. Baptist minister and former Republican presidential candidate Mike Huckabee met the Supreme Court's ruling with the words, "Jesus wept." But even ultra-right-wing radio talk show host Rush Limbaugh conceded earlier this year that the gay marriage movement would no longer be stopped, saying, "This issue is lost."