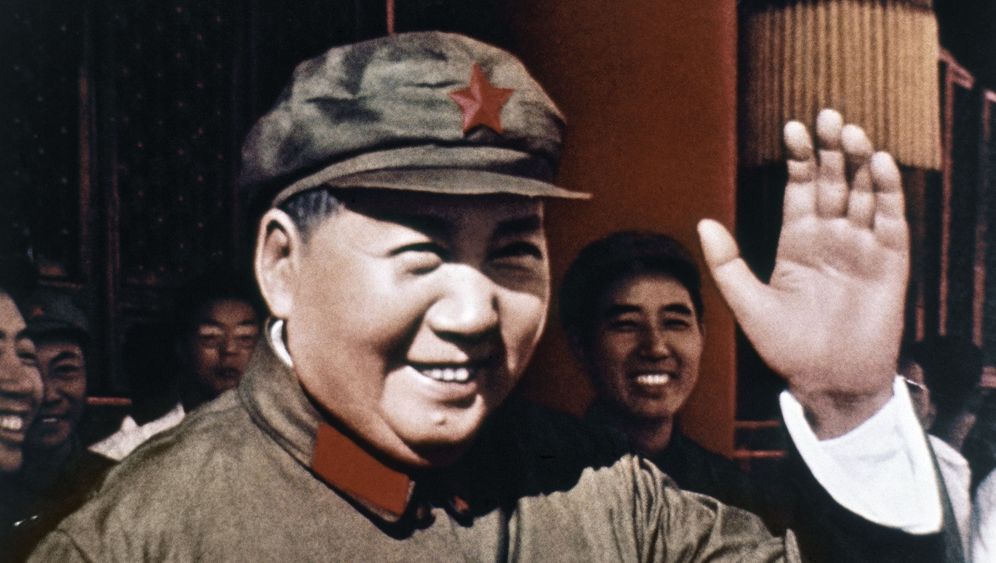 Wu Yongtang's great advantage is having a mole on his chin almost exactly where Mao Zedong did. The 56-year-old actor pulls at the bandage covering the spot, then carefully peels it off and touches the scab with his fingertip. He saw a doctor to have the size of the mole reduced, and now it is exactly as large Mao's was. Wu is pleased. He looks like Mao, he speaks like Mao and his mole might be his ticket to landing movie roles as Mao. There's demand for Mao look-alikes in China -- and especially now. "People have deep feelings for the chairman," Wu says.

Wu spent a full theater season playing Mao at the open-air theater in Yanan, a city in central China described locally as the "Holy Land of the Chinese Revolution." Yanan is where the Long March ended in 1935, the military retreat that marked Mao's ascent to power, and where the Communist Party of China established its headquarters for the province of Shaanxi. Every morning, visitors can watch a performance here called "The Defense of Yanan," complete with fake tanks and real horses. A model airplane even drops from the sky at the end of the show, a moment captured by all the mobile-phone cameras of audience.

The Chinese government has dubbed this "red tourism," and it is meant as a response to its people's identity crisis, to a certain sense of emptiness and alienation. What exactly should people in China believe in these days? Who is really still interested in ideology? Taking a proactive approach to these questions, the Communist Party decided to put its own history on stage to create reminders of the revolution in various places around the country -- and to make clear to all Chinese citizens who made their country great. The government has also set up a "National Coordination Group for Red Tourism" and convened "Conferences for Red Tourism" that have even been attended by a member of the Politburo.

But one thing sets this approach apart from similar campaigns in the past. This time, the idea is for Chinese people to have fun with their political party, to enjoy themselves in the great amusement park of Communism. They're invited to feast on braised pork, Mao's favorite dish, in the leader's birthplace of Shaoshan. They can drink from the well Mao himself supposedly dug in Ruijin or carry fake rifles aboard a rollercoaster at the "Cultural Park of the Eighth Route Army," where they can re-enact the war against Japan. There have even been "National Red Games," including events such as "storming the log house" and a "grenade toss." Party training centers and companies send members to these destinations as part of educational holidays. China saw over half a billion "red tourists" in 2011 alone.

The Capitalist Birthplace of Chinese Communism

Wu Ning, a businessman, came here to Yanan with one such tour group. He only just missed the other Mr. Wu, the Mao look-alike, since the revolutionary performers are on break during the winter. Wu Ning came at the invitation of Shanghai's local government with a group of researchers, doctors and teachers. For five days, from 8:30 a.m. to 6 p.m., these capitalists are learning about the "spirit of Yanan" and Mao's wisdom.

When asked his favorite Mao quotation, Wu Ning smiles, swallows and remains silent, unable to come up with a suitable answer. Wu, 42, is the director of a biotechnology company. He wears an elegant English coat, owns two smartphones and holds two degrees from British universities. He's not exactly a man for Mao quotations, but that's not something he can say here in Yanan. Instead, he merely says: "Mao is history."

Each morning, the group sits in long rows at the China Executive Leadership Academy, one of the country's most important centers for training party cadres. Then, in the afternoons, they suffer in the freezing air, sitting on brightly colored plastic stools at outdoor readings of the legends and myths surrounding the founding of the Communist Party.

They are also taken to see the cave where Mao lived, to observe the spartan conditions under which the revolutionary spirit first grew. A wooden bed, a washbasin and a desk -- these are the origins of China's Communists.

Today, Yanan's party functionaries are meeting in a five-star hotel, where they are conducting their business in the conference room and relaxing in the lobby. The hotel bar's illuminated signs offer "joy in luxury" and "red wine feeling." For Wu Ning's group, too, the only hardship here is a lack of karaoke in the evenings.

Many in Wu's group feel there is too much commercialism here in Yanan. Visitors can buy delicate Mao images cut from paper, Mao tapestries or a life-size plush version of Mao's white pony, which sells for 6,800 yuan (about €840 or $1,080). In front of Mao's cave, pudgy party members who've paid 15 yuan (€1.80) for the privilege squeeze into Red Army uniforms and fumble with plastic guns before posing for pictures.

"I just need the upper body," calls out one man wearing Nike sneakers under his revolutionary jacket. "Hold the party flag with feeling," another directs his friend in front of the camera. It goes on like this all day, here in China's Communist Disneyland.

Wu Ning says he finds it all "very strange," but also "funny." No one in his group wanted to rent a costume, and only one man tried on a Mao cap.

All this revolutionary education certainly benefits the country's economy. According to the party's newspaper, "red tourism" has created millions of jobs and built thousands of kilometers of highway and several new airports. Soon Chinese patriots will even be able to fly to the spot in the desert where China tested its first nuclear bomb in 1964.

Actor Wu Yongtang earns 10,000 yuan, or about €1,200, each month for his performances as Mao, as well as a bonus for performing every day. Wu wouldn't be easy to replace, and a limited resource brings in a higher price -- even here on the Mao market. But Wu doesn't really like to talk about money. Instead he explains that Mao appears in his dreams and interprets this as meaning "he wants me to play him."

Before finding the role of his life, Wu had only worked as a driver, first in the army and then for a factory. He beat out two other applicants for the Mao role at the first interview because they were both barely 1.7 meters (5 foot 7 inches) tall, or too short to play Mao, who was 1.8 meters tall.

Since getting the role, Wu goes to the barber daily to get a Mao haircut for 10 yuan (€1.25). He smokes like Mao, cigarette clutched between his pointer and middle fingers. He also walks like Mao, slow and deliberate, with hands clasped behind his back, chest sticking out, lower back straight and gaze forward, even if it's only to cover the short distance to a restaurant bathroom.

Wu has cobbled together an image of Mao that works for him. Anything that doesn't fit into that image, Wu simply doesn't talk about -- although he remembers well what it was like to be a child in the 1960s, when Mao drove the country into famine. Wu remembers how hunger blurred his vision and how he ate tree bark and roots.

"In Mao's era," Wu says, "people were poor, but rich in spirit." When he performs as Mao, elderly audience members gather around him. They are disappointed and upset by the inequalities in today's China and by corruption among government officials. They ask for his autograph and invite him for meals. Indeed, Wu lives on the nostalgia of his fellow Chinese.

The official Communist Party line is that Mao's policies were 70 percent good and 30 percent bad. Still, the party's founder is an important part of its image. Mao's picture appears on China's money, and his portrait hangs at the entrance to the Forbidden City in Beijing.

The Cultural Revolution, of course, was not mentioned as part of the educational lectures Wu Ning's tour group attended in Yanan. Even within their group, he and his fellow travelers didn't talk about it. "We all think the Cultural Revolution was bad," Wu says. "We don't need to discuss it."

In any case, he doesn't spend a lot of time thinking about the past. Wu is far more interested in knowing how the Chinese government envisions the future of the high-tech industry. After spending the days in Yanan dutifully recording the history of the Communist Party from 1935 to 1948 in his notebook, Wu chatted over dinner with the Shanghai government officials about his company and politics. A couple of the men from his tour group have become business contacts.

If there's anyone Wu admires, it's Deng Xiaoping, the party's reformist leader between the late 1970s and early 1990s. Wu says he has Deng to thank for his company's very existence. "Deng gave our generation the opportunity to develop," says Wu, who is not a member of the Communist Party.

On the other hand, Wu Yongtang, the actor, says: "I have a great responsibility to protect Chairman Mao's image." But playing this role isn't always easy. In 2010, Chinese bloggers sharply criticized Zhang Tielin, an actor who had signed on to play Mao on TV, because he had taken British citizenship. Some felt that a person like Zhang shouldn't be allowed to portray the founder of the People's Republic. The state-run China Daily declared that no actor associated with any sort of scandal should be allowed to play the role of Mao.

Wu is still hoping to break into film. But, during the winter pause in Yanan, he gets by with performing at weddings. Every couple days, he receives a call from another couple wishing to book Mao for their wedding. Wu then dons his costume, reads out the marriage certificate and poses for a photo with the couple. He says people book him because of the "good atmosphere" he brings.

Back in Yanan, an old man with a lute stands just outside the entrance of the memorial to the revolution. The man was once a farmer, one of the people Mao wanted to liberate. Now he's a beggar who lives on what he gets from the Mao tourists.