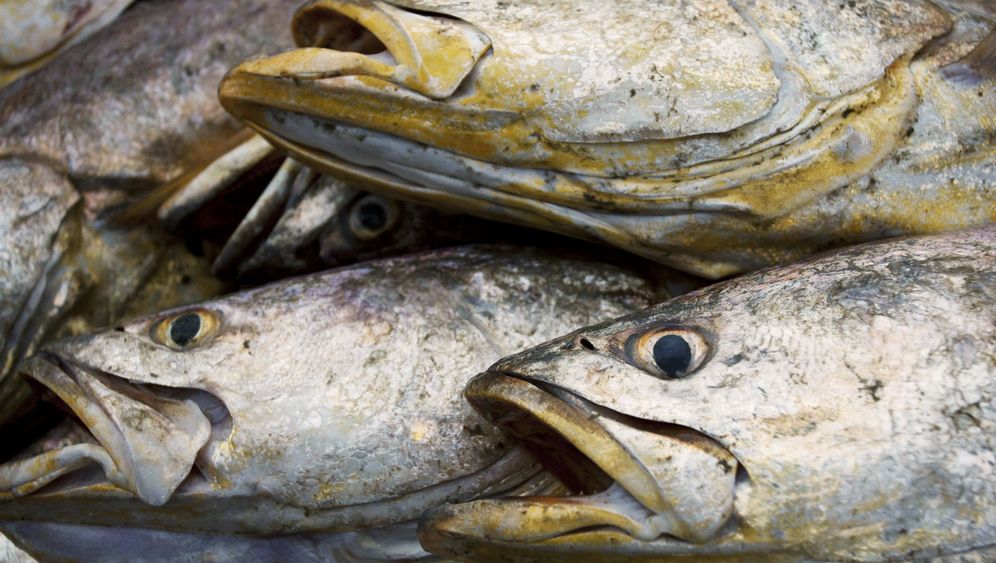 Could millions of hobby anglers and sports fishermen really be wrong? They believe that getting a nasty-looking hook stuck in the mouth doesn't hurt fish. Fishing enthusiasts insist the nervous system of the aquatic creatures is far too primitive for them to feel real pain.

After they bite, fish often put up an impressive fight. But doesn't this simply confirm how little agony they actually experience? "If fishing hooks were painful, then a fish on a hook wouldn't fight, but rather follow the pull of the line as willingly as a bull that can be easily led with a nose ring," argues Viennese fisherman Johann Brabenetz in the trade journal Der Fliegenfischer ("The Fly Fisherman").

Until now, angling aficionados have seldom been accused of cruelty since fish are regarded as lower life forms. Indeed, hardly anyone believes that they have feelings like mammals and birds, and most people only have emotional feelings for warm-blooded animals.

But now the image of these robot-like creatures with their purported three-second memory is starting to crack. The latest findings from fish biologists, neuroanatomists and behavioral scientists show that these evolutionarily ancient vertebrates are far more than mere reflex machines.

Researchers from Queen's University, in Belfast, have proven that when fish are subjected to pain stimuli, the signals by no means simply ebb away in the spinal cord. Scientists have discovered sensitive skin areas directly behind the gill covers of goldfish and trout. Using implanted electrodes, they have been able to show that the nerve cells located there send signals directly to the fish's brain.

When researchers poked the animals with needles, a flurry of neuron messages were transmitted to the endbrain -- the very region of the brain where pain signals are also processed by birds and mammals.

Not a Simple Reflex

Similar results have now been achieved with Atlantic salmon, carp and cod. "These studies demonstrate that higher brain areas are implicated in the fish response to potentially painful events and that their response is not a simple reflex," explains Lynne Sneddon, a fish expert at England's University of Chester.

A Spanish research team was even able to identify an area of the goldfish brain that appears to serve a function similar to the limbic system, the region of the human brain that becomes highly active when people experience fear or pain. As with mammals, these cerebral receptors in fish consist of a number of anatomical structures: Incoming signals to the amygdala are processed by an emotional filter, while the hippocampus is for memory, but also plays a key role in spatial orientation.

Researchers have long searched in vain for these two regions -- apparently because they were looking in the wrong place. It turns out that as a fish matures from an embryo to a full-grown adult, its brain architecture is turned inside out: While the human amygdala and hippocampus lie deep below the cerebral hemispheres of humans, the comparable structures of a fully developed fish are located directly on the surface of the endbrain (see graphic).

Behavioral tests have confirmed these findings: Goldfish whose hippocampus-like structures in the endbrain have been surgically disabled suddenly lose their sense of orientation -- as do mammals whose corresponding cerebral regions have been disabled.

Furthermore, when researchers put the amygdala-like sections of the endbrain out of action, the fish were no longer capable of learning from electric shocks.

This proves that these supposedly insensitive aquatic animals have the necessary hardware in their heads to feel fear and pain. "Even though the structure and function of the fish equivalent is very much simpler than our own limbic system, the fact that scientists have discovered the presence of similar structures is impressive," explains Victoria Braithwaite, a zoologists at Pennsylvania State University.

A number of years ago, Braithwaite caused a stir with another discovery that she made about fish physiology. She found more than 20 pain receptors around the mouth and head of rainbow trout -- ironically located precisely where the barbed hooks of anglers penetrate the fish's flesh.

A Conscious Awareness of Pain

These front receptors of the nervous system react not only to pinpricks, but also to heat and noxious chemicals. Combined with the specialized nerve fibers that transmit pain impulses, the receptors don't work any differently than they do among higher vertebrates.

But are fish also capable of converting their perception of these complex signals into a conscious awareness of pain? A wide range of behavioral tests at least suggest this is the case.

Rainbow trout whose lips were injected with bee venom or acetic acid ventilated vigorously with their gill covers for nearly three-and-a-half hours, stopped feeding, rocked back and forth on the floor of the tank or rubbed their lips on the glass walls. They displayed far more than just three-second reactions.

Trout that had been subjected to noxious chemicals paid little attention to a brightly-colored Lego tower introduced into their tank despite the fact that they normally avoid new objects, suggesting that their attention was dominated by pain. However, fish that simultaneously received painkillers and chemicals displayed the usual degree of caution with regard to the foreign objects -- because the morphine had apparently eliminated the pain.

A 20-strong team of experts working on behalf of the EU Commission in Brussels recently evaluated all the experiments done on the subject. Since all of the current findings on the ability of fish to feel pain are based on a limited number of species, including trout, carp, zebra fish and goldfish, the group concluded that it is not possible, for the time being, to make generalizations. Nevertheless, the experts recognized these insights into the emotional life of fish: "From studies of sensory systems, brain structure and functionality, pain, fear and distress, there is some evidence for the neural components of sentience in some species of fish."

The experts not only believe them capable of fear and pain, but also sensations of pleasure. For example, oxytocin -- often referred to as the "love hormone" -- has also been documented in fish.

Sports fishing advocates slam such statements as inadmissible anthropomorphisms. They say that human attributes have been naively attributed to animals.

Although the angling lobby can no longer deny that fish have a functioning system to detect painful sensations, they still maintain that only the highly developed cerebral cortex found in mammals is capable of producing a conscious awareness of registered pain stimuli. "There is no human-like creature hidden in a fish brain," argues US researcher James Rose, an expert often cited by the fishing industry.

"The fish's pain and suffering has not been proven," agrees Robert Arlinghaus, a fish expert at the Berlin-based Leibniz Institute for Freshwater Ecology and Inland Fishing. "We simply do not know if fish have such feelings."

For many experts, however, the lack of a cerebral cortex no longer appears to be sufficient reason to rule out conscious awareness. Remarkable medical cases have cast doubt on the old school of thought: Neurologists occasionally report people who have only half a cerebrum. Where others have synapses chattering away, these individuals only have brain fluid swishing about -- and yet they are often highly intelligent and socially well adapted.

Other researchers are now venturing even further. They maintain that they have discovered that even invertebrates have a certain awareness of pain. Robert Elwood, an animal behavior specialist at Queen's University, in Belfast, applied acetic acid to the sensitive antennae of prawns. The crustaceans subsequently rubbed the afflicted areas for up to five minutes. According to Elwood, this reaction is reminiscent of how mammals react to pain.

Octopuses, the most intelligent of all cephalopods, may enjoy an even more diverse emotional life. These animals, which are famous for their amazing contortions, never cease to amaze researchers: They often quickly manage to figure out how to open childproof drug containers if they know that tasty treats are hidden inside, and reports of nocturnal escapes from reputedly well-secured tanks are legion. "There are a lot of reasons why people don't want to think about pain among invertebrates," says Elwood.

Hobby anglers and sports fishermen are afraid that new regulations could be introduced that would limit their fishing pleasure.

Current legislation in Germany already stipulates that anglers can only head out with a rod and reel if they are fishing for food or culling stocks to maintain healthy fish populations. Tournaments where the catch is thrown back in the water after it is weighed have been banned -- along with the use of minnows as live bait.

But fish biologists do not primarily suspect lonely fishermen on rivers and lakes of committing acts of wanton cruelty. Their attention is directed primarily at fish farms and industrial deep sea fishing.

According to Braithwaite, the zoologist in Pennsylvania, 20 years from now, roughly half of the fish we eat will be raised on huge fish farms all around the world. "If we care about protecting pigs and chickens in the industrial production of food, we shouldn't exclude fish," the researcher argues.

She also says that more attention should be given to the enormous fishing fleets that sail the world's oceans to ensure that the creatures "are quickly and cleanly killed." "Most of us," she adds, "certainly don't feel comfortable with the huge quantities of fish that slowly suffocate on the decks of ships."

Research facilities are also coming under increasing scrutiny since fish are increasingly replacing mice and rats in test laboratories. Sneddon, the fish expert in Chester, feels that it would be appropriate in the future to apply "human endpoints" to these mute creatures in experiments. Just as with mammals, she says, "scientists should therefore administer analgesia if it does not interfere with study results."