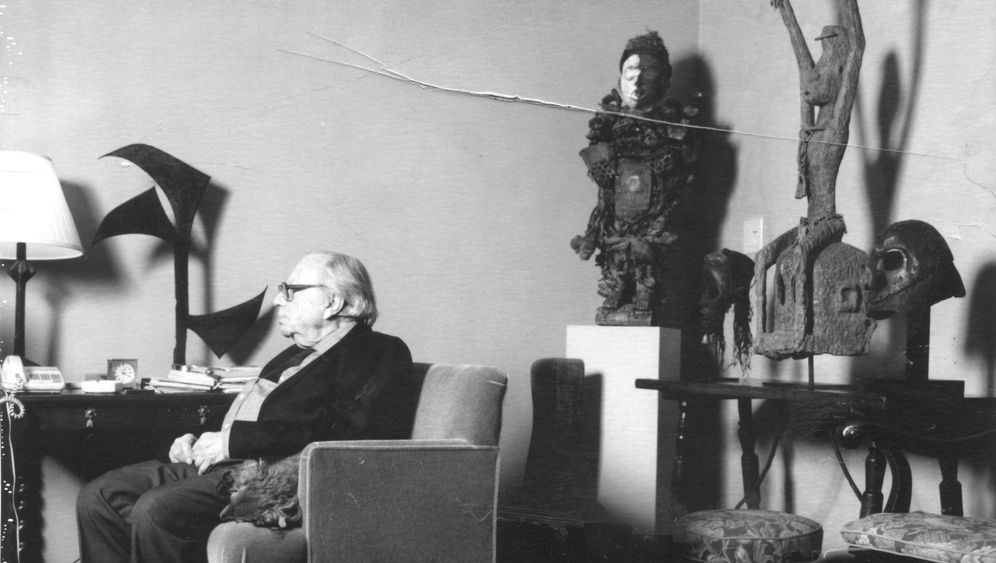 Photo Gallery: The Man with the Masks

In September of 2005, art historian Lisa Zeitz visited then-92-year-old Werner Muensterberger in his New York City apartment in order to speak to a "psychoanalyst who understood the art collector." But he turned out to be so much more.

An analyst, ethnologist, professor of "ethno-psychiatry," an author and a collector of "primitive" art, Muensterberger treated numerous celebrities, including James Dean. His 1993 book "Collecting: An Unruly Passion" became a classic in its field. This first visit by Zeitz blossomed into a friendship that lasted until Muensterberger's death in 2011 and ultimately became a biography about his life, "The Man With The Masks -- Werner Muensterberger's Life of a Century" (Der Mann mit den Masken - Das Jahrhundertleben des Werner Muensterberger) which was recently published in Germany.

Zeitz was immediately impressed by the "small man in the checkered jacket" who offered to speak with her in German. Also impressive was the "awesomely magical aura" of his apartment filled with eerie masks and art objects -- a "soot-black relief made of Pavia skulls and bones," a life-sized "slender, headless torso with a long phallus" and a branched throwing knife from the Congo. This wasn't his collection, Muensterberger explained: "These are just a few things that I like. Aesthetics are important."

Bathing Naked for the Baron

Art collecting wasn't the only topic at that first meeting. Muensterberger spoke to Zeitz about early childhood trauma and his time spent at the Odenwaldschule, Germany's oldest private rural boarding school. He also discussed his distant uncle Eduard von der Heydt, the German-Swiss baron, banker and art collector, who instilled in him a love of art and a yearning for a life that would straddle science, bohemianism and high society.

Having assembled one of Europe's earliest and most important collections of non-European art, von der Heydt bought the already prominent artists' colony Monte Verità on Lake Maggiore, where the young Muensterberger would visit him over the course of several summers -- under the condition that he bathed naked every morning in front of the baron's window.

On her first visit, Zeitz was also introduced to Muensterberger's young male companion from Chad, Celestin Clamra, and told of the psychoanalyst's many prominent friends over the years -- among them Pablo Picasso, Andy Warhol and Walt Disney.

Muensterberger was born in 1913 the son of a Jewish merchant family in the western German region of Westphalia. When he was 15, his mother died, triggering a "reactive depression" that led him to his "first contact with psychoanalysis." He entered treatment with the "excellent analyst" Karl Landauer, a time he wrote about later: "I was 15, deeply impressed and I knew I too wanted to become an analyst."

After graduating from the Odenwaldschule and traveling as an 18-year-old to Egypt and Nigeria, he went to Berlin in 1934 to study ethnology and art history, making frequent visits to the Museum of Ethnology and to famous collectors and dealers of non-European art. In 1936, he fled the Nazis to Holland. The Dutch did not recognize his high school diploma, so he completed his graduate studies in Switzerland.

Living back in Amsterdam, he once spent 35 guilders -- to be paid in seven monthly installments -- on a Guro mask from the Ivory Coast, which he possessed until his death. Muensterberger survived the Nazi occupation, because his girlfriend kept him in hiding. In 1947 he emigrated to the United States and became a successful psychoanalyst, treating patients such as James Dean and Nelson Rockefeller. He traveled some dozen times to Africa, moved to London in 1974 for a decade with his third wife, then moved back to the US, where he continued to practice as a psychoanalyst.

After reading Zeitz's book, one is left wanting to know more about the private Muensterberger, who never fully removed his mask during his time with the young art historian. Where did he derive the self-confidence that propelled him through such an eventful life? How did he feel about living among the elite and being offered membership, for instance, into the exclusive London Century Club?

And one would certainly like to know more about a psychoanalyst who was bisexual but also married three times. About a man who left the girlfriend who risked her life for years to hide him from the Nazis, and whose third wife, a successful and composed woman, killed herself in Morocco possibly out of loneliness. And Muensterberger barely mentioned his father, who was deported and murdered in the Holocaust.

The best glimpses we have of what lies under the mask are descriptions by others -- by a German collector, for instance, who describes him as a "likeable rogue." Louise Bourgeous, on the other hand, once dismissed him as a "name-dropper" chiefly interested in "social prestige, wealth and the English aristocracy." Who was he really? That may remain forever hidden behind his masks.