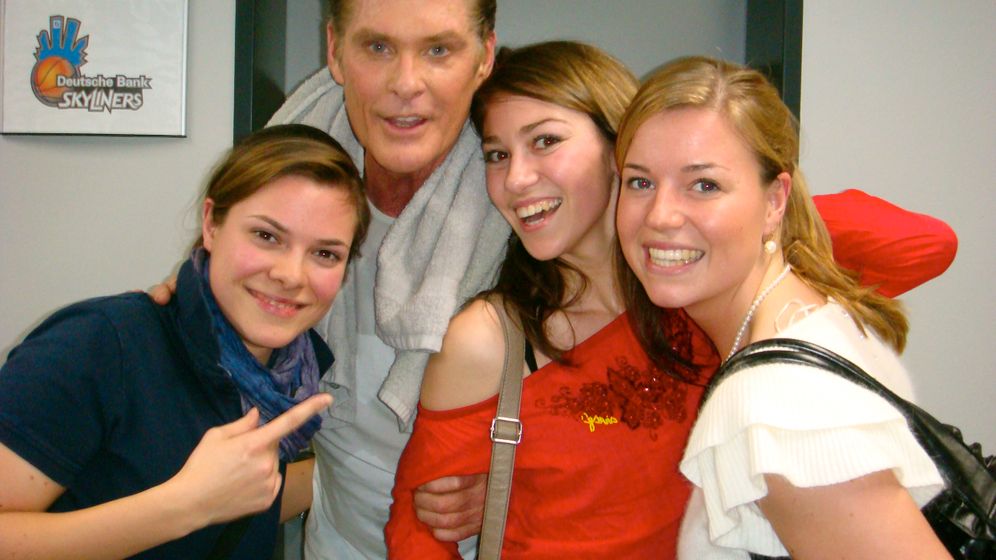 It's hard to tell whether the man who has just taken the stage on this Friday night, once a superstar in Germany, is at all capable of self-mockery. With his fringed leather jacket and studded belt, is he perhaps quoting himself and just hoping that people can see the inverted commas? Or is this business with the glittery jacket, the silver suit, the leather tuxedo, the sunglasses with the flashing LEDs, the "Baywatch" jacket and the red life preserver actually meant to be serious?

The question is not whether David Hasselhoff, 58, is a clown. The question is whether he is a tragic clown who, it appears, is trying to make a serious comeback as a singer. Or whether he can laugh at himself as his audience does, men wearing T-shirts emblazoned with "The Hoff" bellowing "shaa-lala-la-la" while downing pint after pint of beer. "We actually wanted to get a lot more wasted than this," one male concertgoer says with pride. For many at the Hasselhoff show, the singer's recent alcohol problems are just one more reason to be here.

On this night at a sporting arena in Frankfurt, the first concert of the German leg of the comeback tour, a generation of Germans has converged that became a laughing stock around the world for an adoration of Hasselhoff that drove the singer to the top of the pop music charts for weeks on end two decades ago. It is the generation that grew up with "Knight Rider" and "Baywatch" on television. For many boys at the time, David Hasselhoff was the reason to buy German pop magazines like Bravo. And it was Pamela Anderson who typically featured in the first spreads of Playboy they thumbed their way through.

Tonight, I will face up to my guilt head-on and admit it: I belong to this generation. Yes, I bought the "Looking for Freedom" album with money my grandmother gave to me -- my first cassette tape. I even decorated my bedroom with 65 Hasselhoff posters, including one life-size image of him in a red "Knight Rider" t-shirt. And, yes, I sang along without understanding the lyrics back then when he sang in Berlin. I was a kid, after all, and my English just wasn't good enough yet. I even let my mother come with me to my first ever concert and there was something in the show for her, too: Hasselhoff crooned a Beatles medley.

Friends warned me against going public with this. It would be social suicide, they cautioned. But mine was a youthful transgression: I was 10 years old at the time, and I was far from alone in this country. There were so many children at the concert that a German newspaper even ran the headline "The Little Singing Sandman" in an article reviewing the Hasselhof concert, a reference to a popular TV show here that many parents have their toddlers watch before sending them off to bed. Besides, you can't escape your past.

Tonigh, I want to find out what happens when my generation and Hasselhoff meet again.

On first impression, the differences are subtle. As they did 20 years ago, concert organizers have brought along a black Trans Am: K.I.T.T., the talking car from "Knight Rider." Only this time it is a really bad copy of the original, parked outside the concert hall in the pouring rain. There are no flashing red lights under the hood, and a sign hanging on the car says "Please don't touch." When a number of people reach over the chain to touch it, all the security guard on duty does is look away. "This alone is enough to make the concert worthwhile," one man slurs.

Inside, screens above the stage flash: "The Man, The Myth, The Legend, The Hoff". Before the concert begins, a brief film explains what exactly lured us here tonight -- we are shown a video of Hasselhoff singing on the Berlin Wall, we learn that he is the most popular TV hero of all time and has sold countless records. A man who belongs on Hollywood's Walk of Fame.

Hasselhoff's stamping, leaping and grinning on the stage seems just like it did back then -- only these days his belly spills out over his belt and perhaps his knees aren't as flexible as they once were. "Ich liebe euch alle," I love you all, he calls out in German. Musically, his evolution has been a bit like the plot of a "Baywatch" episode: The bathing suits may change occasionally, but everything else stays the same.

What has changed, though, is the crowd's behavior. Everyone here knows about Hasselhoff's alcoholic meltdowns. Everyone has seen the YouTube video filmed by his daughter, in which he rolls around on the floor struggling wildly to tuck a cheeseburger into his mouth. Many who have converged here, mostly men around 30, readily admit that "The Hoff" was a childhood hero for them. But few would be keen to blare Hasselhoff oldies like "Crazy for you" or "Limbo-dance" in their cars today. Many are also quick to say their tickets were gifts from their wives or girlfriends.

For fans of David Hasselhoff, the show is partly an ironic statement, but also an opportunity to clap along. "If a party isn't taking off," a 27-year-old sports teacher from Cologne says, "you just pop in some David Hasselhoff." He claims a few Hasselhoff hits can animate even the most tired or drunken of friends. The only other group that can have a similar effect, he says, is Roxette.

The concert could also portend to be a chance to see a lurching 6 feet, 2 inch giant almost fall from the stage -- as nearly happened at the 2009 MTV European Music Video Awards in Berlin, when the singer could barely hold himself up. Many of the 1,900 audience members are driven by a bit of schadenfreude and a secret hope that the evening will turn out to be part concert and part freak show, a mini meltdown for the Hoff.

Some fans gathered here take Hasselhoff as seriously as I did back when I was 10, but they seem to be in the minority. A 30-year-old waitress from Frankfurt reveals that her favorite song is still "Crazy for you." She's wearing a "Knight Rider" shirt and a "Baywatch" jacket that her cousin brought back from a trip to the US as a gift. A 36-year-old mechanic from Osnabrück was so impressed by the show when it made a stop in Vienna, that he has traveled to Frankfurt to watch it again.

Ultimately, Hasselhoff survives the evening, getting through the concert relatively unscathed. He accepts his praise when he treats the crowd to his biggest German hit, "Looking for Freedom," sung while wearing a leather jacked with a studded eagle on the back. He ignores the empty beer cups that are volleyed onto the stage from time to time. And he struts and grins just as he has always done. When, before the final encore, he tells the crowd, "I'm too old for this," it almost sounds tongue-in-cheek.

David Hasselhoff performs on Saturday in Rostock, Sunday in Berlin and Monday in Munich on the final leg of his Germany comeback tour.
Mehr lesen über
Culture