Kids never want the fun to be over. Being thrown in the air by their daddy just once isn't enough -- they want him to do it again, and again and again. The mini hot rod gives adults a chance to recapture that feeling of exhilaration. Anyone who's been behind the wheel once won't rest until they've done it again.

Forget everything you've ever heard about driving satisfaction and imagine a cross between a soap box car and a go-kart. A mini hot rod is a bit like a narrow bathtub -- and climbing in is similar too. Drivers have to lower themselves into the cockpit, one leg after the other, with their hands braced on either side. Then all they need to do is to put the pedal to the metal and hit the traffic.

As dangerous as it looks, the mini hot rod is approved for road use. Fifty one-year-old Maik Wenckstern still can't believe it. He and his brother developed the quirky vehicle five years ago. A beer-fuelled race on riding lawn mowers was what first gave them the idea.

"It took technical inspectors two years to approve it," says Wenckstern. In Germany, a vehicle is only road-worthy if it can travel at a speed of at least 80 kilometers per hour (about 50 miles per hour), but that was the least of his problems. He cleared the biggest hurdle when inspectors gave the nod to the GFK bodywork.

Weighing in at about 120 kilograms, the mini hot rod is even allowed on the autobahn -- not that Wenckstern ventures there very often. A trip along the Hamburg harbor is a more sedate option, but helmets are nonetheless a must. The world looks different from behind the wheel of a hot rod. A Smart car suddenly seems as big as a jeep, while SUVs look like trucks and it feels as though slipping underneath an actual truck is a realistic possibility. Inside a mini hot rod, the driver is at eye level with truck tires. 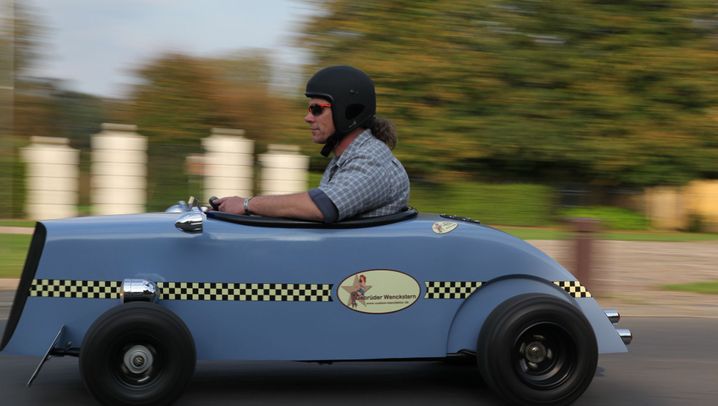 But it's too exciting an experience to feel frightening. Traveling in a mini hot rod is sensory overload -- all roaring single-cylinder engines and tearing winds. It's an intense, unfiltered experience. Not to mention the lack of suspension: In a mini-hot rod, driver and vehicle become one. It's a bit like sitting on a carpet and being pulled over asphalt. Driving over cobbled streets makes the teeth chatter.

But discomfort is a small price to pay. The fixed carriage and direct steering make taking 90-degree bends seem easy. It's amazing how much fun can be had with a single-cylinder engine and 14 horsepower. It feels like sitting in the front-seat of a rollercoaster, with the added bonus of being able to determine direction. The only downside is that, for the time being, there's no room for any passengers.

Production takes place in Norderstedt near Hamburg. Controlled chaos reigns. With its tool boxes, spare parts and engine sets, the 400-square-meter assembly hall looks at first glance like any other car workshop. Up to 14 mechanics are at work here.

"We built the prototype in a garage," explains Wenckstern. The blueprint was a 1932 Ford Revolver Hot Rod and there were a few teething problems. "The headlights and wing mirrors kept falling off," he says, because of the lack of suspension.

The Highs, the Hazards

Nothing falls off any more, but overseas expansion brings its own challenges. "We had to make the windshield a bit larger for the Austrian market to make room for the vignette," says Wenckstern.

Prices for mini hot rods begin at €12,900 ($16,600). So far, Wenckstern has sold 20 of them to private customers. But most are bought by city tour operators -- they can be rented by the hour in Hamburg and Berlin, while further hire outlets are set to open in Dresden and Wiesbaden this summer and Wenckstern is in talks with potential partners in other German cities as well as Spain and Austria. "We plan to assemble between 100 and 120 mini hot rods this year," he says.

So far, says Wenckstern, there have never been any accidents on these city tours. "Someone from the team always accompanies them, just to be on the safe side," he explains. Small as it is, the mini hot rod does feel a little vulnerable -- and reliant on other motorists to show some consideration.

Given the basic technology, the mini hot rod driver can't do much wrong. Manning one of these vehicles requires little more than gunning the engine, steering and braking. There's only one forward and reverse gear. The hardest task is avoiding potholes -- and therefore a slipped disc -- and keeping enough distance from other cars at traffic lights so as not to get a lungful of exhaust when they drive off.

Driving a hot rod isn't for the introverted, either. It tends to be even more of a talking point than a Lamborghini. Down by the harbor in Hamburg, a police officer on patrol gives a friendly wave, and the car even catches the attention of two elderly ladies. "Great car! What's it called?" asks one. Do it again!