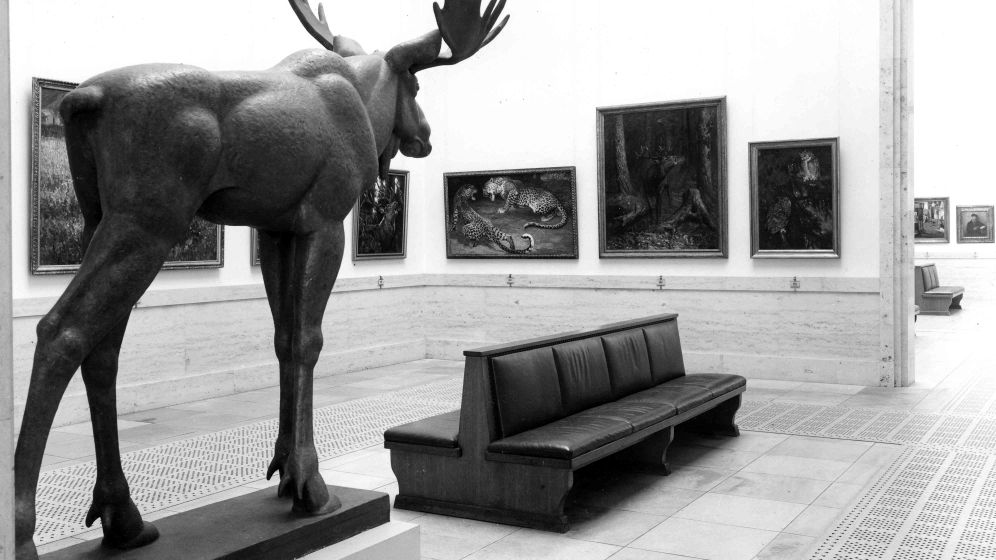 It's a wonder they weren't simply thrown out after the end of the war. After all, art history is fond of ignoring the recent past. Indeed, the albums themselves were forgotten for decades.

Yet the six massive volumes, sheathed a deep shade of reddish brown, each tell a sensational story. They contain images that reveal Hitler's true aspirations for contemporary art -- pictures from the so-called "Great German Art Exhibitions" in Munich. And now, an online archive of the images has been made public.

One look at the images shows that the artwork was even more trivial and vulgar than previously believed. And no one bought as much of it as Hitler himself, who spent millions on his collection. But many of the works were also purchased by ordinary Germans -- many of whom later sought to conceal where the painting hanging in their living room had originated.

For decades, the albums were ignored in Munich's Central Institute for Art History, with few researchers interested in exploring the aesthetic inclinations of the Nazis. But then, several years ago, scientists at the institute teamed up with colleagues from the Haus der Kunst in Munich and the German Historical Museum in Berlin. They wanted to thrust the albums, as well as other images from the "Great German Art Exhibitions" -- or GDK for short, into the focus of researchers once and for all.

The result is the impressive image archive that was introduced in Munich on Monday and which will be made available to the public on Thursday at 9 p.m. under the Internet address www.gdk-research.de.

The images document the Nazi-approved art exhibitions that took place every summer from 1937 until 1944. They were meant to sell paintings and other works of art with which the Third Reich was to be "decorated." And they were supposed to prove how the creative scene in Germany was flourishing under Hitler's rule. Indeed, the House of German Art (today: House of Art) in Munich was built for that express purpose as well.

Few of the presented works -- likely no more than one 10th of the total 12,550 -- have ever been depicted in illustrations before. Those that were shown appeared again and again, making Nazi art appear much more monumental and triumphant than it really was. Not surprisingly, several of the images now being made available depict Adolf Hitler. Many also show countless heroic statues chiseled by the crude hand of Arno Breker, the German sculptor who enjoyed the support of prominent Nazis. There's even a bronze figure shown lobbing a hand grenade.

An astonishing amount of female eroticism was also produced and vividly illustrated, as were an abundance of majestic landscapes, ballet dancers, floral bouquets and deer illuminated by the moonlight. One image in particular caught Hitler's eye -- that of a champion shooter. Albert Speer, the official architect of the Third Reich, acquired a piece called, "Rübezahl's Empire," named after the mountain troll of German folklore it depicted. Foreign Minister Joachim von Ribbentrop treated himself to a piece called the "Awakening." Joseph Goebbels opted for a painting of "Farmer Venus." Next to Hitler, the propaganda minister was one of the Reich's most active art collectors.

Some artists tried to latch onto the bourgeois motifs of the 19th century. The produced a seemingly unending stream of landscapes, bouquets and female figures suffering from a chronic lack of clothing. The women carried vases and threw balls, they danced, swam and stretched, or they lay on sheets. They were painted in oil, cast in bronze or sculpted from porcelain. Some even served as templates for postcards to be sent to soldiers on the front.

15,000 Reichsmarks for the Farmer Venus

The first "Great German Art Exhibition," however, caused quite a dispute. Hitler had flown in from Berlin and was dissatisfied with his choices. "The Führer is in a fit of rage," Goebbels noted in his diary. But then, in July 1937, Hitler was overtaken by an unwavering sense of pride. A catalog from that year's exhibition read: "The only pan-German art exhibition -- this is, according to the will of the Führer now and for all time, the annual exhibition in the House of German Art in Munich -- will show only the most perfect, the most well-manufactured and the best artwork that Germany has to offer."

Hitler was looking for the new Mensch, or man, and he found him in art -- plain and simple, sometimes even a bit lewd. But the high artistic standards formulated in the catalogue weren't actually observed in any of the shows. On the contrary -- everything was subjected to staid realism or portrayed in a relentlessly kitschy fashion. This was even true for the representation of disabled veterans.

And yet, the aesthetic is less uniform than expected, say the researchers Christian Fuhrmeister and Stephan Klingen from Munich's Central Institute for Art History. There was simply too much artwork and too many contributors.

The art of the 1910s and 20's had proven just how exciting Germany could be. After 1933, only artwork that supported the ideology of the Nazis was allowed. The best artists either fled to other countries or laid low at home. The banality of those who remained has finally been revealed by the online archive.