This week, passers-by in Potsdam, a city southwest of Berlin, may well have seen Leonardo DiCaprio attending a glamorous awards ceremony. But they would not have recognized him. With his glasses, his chubby cheeks and receding blonde hair, the German version of DiCaprio looks more like a tubby young banker than some ravishing movie star.

And no, it is not because Leo has aged dreadfully or put on a lot of weight since his last movie. It is because the German DiCaprio is actually the German "voice" of the movie star. Bespectacled actor Gerrit Schmidt-Foss is regularly employed as the Feststimme, or regular voice, of DiCaprio. That is, he plays DiCaprio's lines when that star's English-language films are dubbed into German. Millions of Germans know his voice even though they may never seen him. In fact, Schmidt-Foss, who did the voiceover work for the German versions of "Titanic" and "Romeo and Juliet," has just finished production on DiCaprio's latest film, "Shutter Island". And, as one of Germany's stars of dubbing, he was preparing to attend the ninth annual German Dubbing Awards -- which could also be described as the "the Oscars of over dubbing," on Tuesday evening.

Germany is one of the four countries in the world that dub the most films and TV shows -- the others are India, Turkey and Spain. When a new film is released, or a new television series is bought by German broadcasters, one of around 44 specially equipped production companies gets the job of re-creating the whole script -- in German. The dubbing of computer games and audio books is also a growing sector of the market.

Creative Work That is Left Behind the Scenes

According to a special report compiled by the Berlin-based Institute of Theater, Film and Television Professionals (ISFF) the majority of the companies are based in Munich, Hamburg, Cologne, Berlin and Potsdam. Most of their work revolves around translating scripts out of another language, re-writing them, dubbing them around the existing film and then re-recording the soundtrack for the whole film or television show again. Often films and television shows come with a soundtrack, minus the voices with only background noises, specifically for this purpose. In 2009, the ISFF estimated that the total turnover of the overdubbing, or soundtrack synchronization, industry in Germany amounted to around €87.25 million.

"This often difficult and creatively meaningful work remains mostly in the dark," the organizers of the German Prize for Dubbing, which has been giving out awards since 2000, write on their Web site. This is despite the fact that a dub well done can have a big impact on the success of a film, Hollywood or otherwise, among German-speaking audiences. "The first goal of the awards ceremony is to bring the outstanding achievements out from behind the scenes and onto the stage," the organizers write.

At the awards, which take place on March 23, awards are given out for various disciplines. These include outstanding achievement in female and male dubbing, best new script, best newcomer, best direction, best television series, best animation and best dubbing production overall. Officials at the National Association of German Dubbing Production Companies (BVDSP) say that 57 films, from both film and television, as well as a variety of television series, were in the running for awards this year. A five-person jury made up of industry peers judged the awards.

In terms of what they were looking for in dubbing actors, jury member Clemens Frohmann -- who has been working in the industry, re-writing scripts in German and directing synchronized productions, for almost 20 years -- says the best actors "come as close as possible to the original in terms of the feel, the meaning and the situation. It is not necessarily about how close the actors' voices come to the original," Frohmann told SPIEGEL ONLINE before the awards on Tuesday evening. "It is more about the spirit of the performance. It is about what the characters are feeling -- whether that is hate or love -- and whether the audience feels empathy for the character and whether the audience feels they are seeing one person, not two, on the screen."

When it comes to the best productions dubbed into German, Frohmann says that the jury takes into account the difficulties that those re-making the soundtrack encounter. For instance, the 2009 film "Notorious," about the life of American rapper Notorious B.I.G, has been nominated in two categories this year: For best dialogue and best production overall. "The difficult nature of certain works also draws our attention," Frohmann notes. "There is a lot of slang in 'Notorious' and, of course, a lot of cities have (street) slang like that. For instance, there is slang like that in Neukoelln (a district in Berlin with a large immigrant population) but we couldn't use that. It would just be embarrassing. It's not authentic. And it wouldn't fit," Frohmann says. He's referring to the fact that words can't just be translated -- they also have to be dubbed to match the way the actual character's lips move and the film's length.

Frohmann also makes note of another nominee in the best production category, the 2008 French hit comedy "Bienvenue chez les Ch'tis" (or "Welcome to the Sticks") in which a postal manager is relocated to another area of France, where an almost incomprehensible dialect is spoken. "So the actors in that made up a sort of artificial dialect in German, so that you don't even think about it," Frohmann explains. "That is a special thing. It really is an art form," he declares.

And that's the point of the awards. But while many of the individuals working in dubbing also regularly work in theater or film, Frohmann admits, the industry is often looked down upon and not considered to be as good as real acting. "But that happens in every branch," he argues. "Theater people look down on TV production, saying that only they make real art. And filmmakers look down on theater and TV. Really, that's all nonsense."

Additionally, he knows that while some Hollywood actors couldn't care less about their voices in German, others are actually friendly with their German soundtrack-counterparts -- even meeting them at film premieres occasionally. "Actually I met one Swedish actor at a premier the other day and he told me to give his 'voice' a big kiss," Frohmann recounts. "Because the (German) actor had done his voice so well."

As to whether the future is looking bright for the overdubbing industry, Frohmann says the market tends to experience waves of popularity. For example, when there are a lot more films or television series being made locally, then there is less demand for international films to be dubbed. But he believes the practice of dubbing foreign language films into German is here to stay.

Frohmann has heard the argument coming out of countries where films are not dubbed into the native language (partly because those markets often aren't large enough to support a dubbing industry) which conclude that the citizens of those countries can speak English more proficiently. But Frohmann argues that subtitles take away from the experience of going to the cinema. He can understand English movies -- after all, he watches them for a living. But he admits he still misses many of the finer details.

"You can't look someone in the face while you are reading subtitles," he says. "So you miss a lot. The spoken word is more informative that way and it is also much more about the feeling of the film." 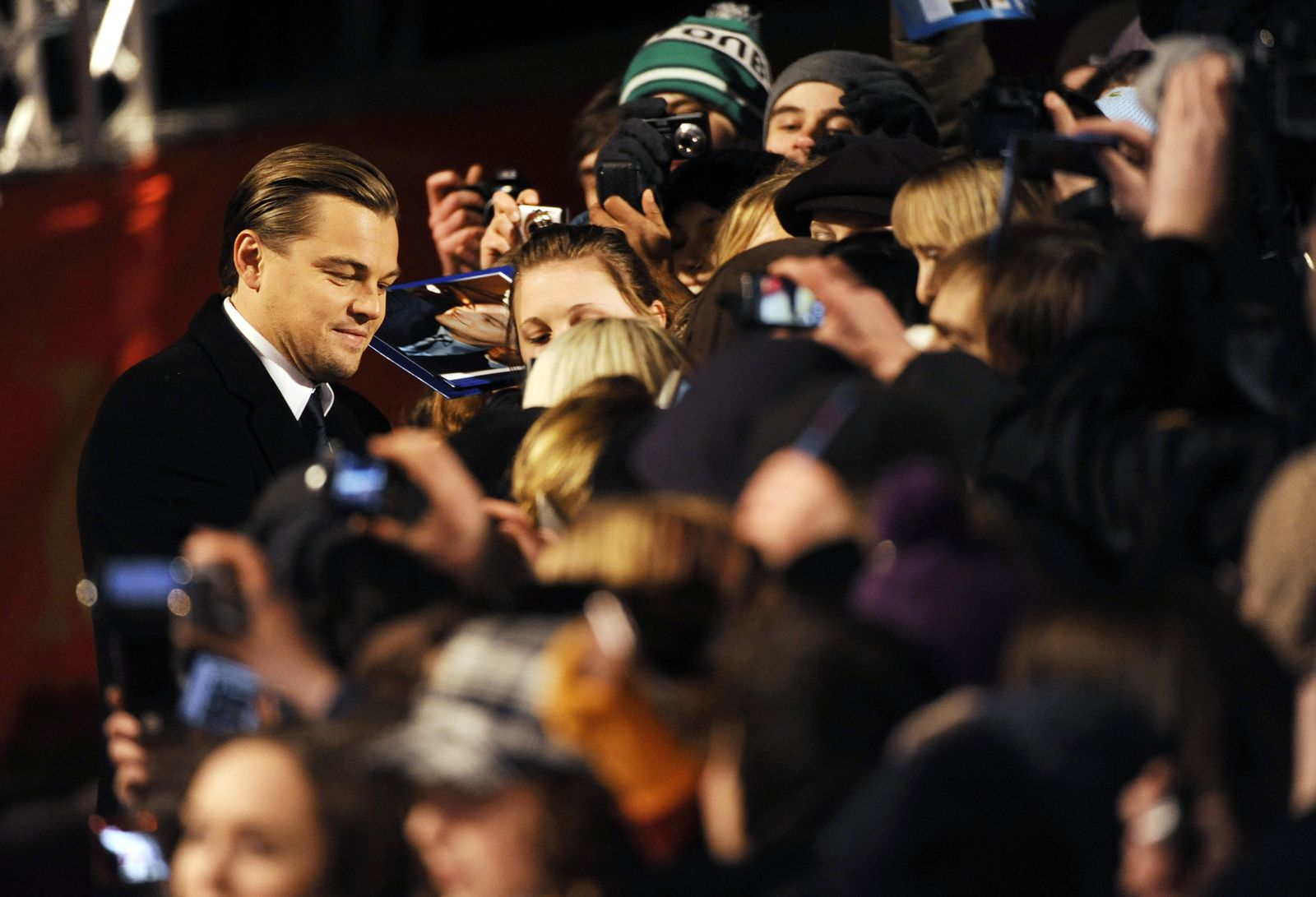 The real Leonardo DiCaprio at a premiere in Berlin recently: The star did not plan to attend the German Prize for Dubbing in Potsdam this week, but his German "voice" did.