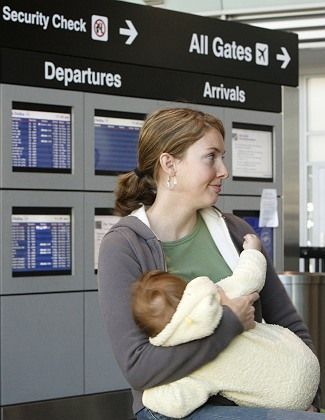 A woman breast-feeds her daughter at a 2006 "nurse-in" in Boston similar to the one held by 100 woman in Italy on Wednesday.

Protesting social attitudes that stigmatize breast-feeding in public in Italy, more than 100 mothers gathered in Rome on Tuesday for a public mass-nursing aimed at bringing attention to the matter.

"People still give a start when they see a woman breast-feeding," Grazia Passeri, president of Salvamamme (Save Mothers), told the Italian news agency ANSA, "but they have to learn that a breast is not just a sexy object." Passeri's organization promotes mothers' rights and is currently running a campaign with the slogan, "I'll Nurse Where I Feel Like It."

Pointing out the irony that Italian television is full of lightly or un-clad women, Passeri added: "It's ridiculous that showgirls can show their (breasts) but mothers can't."

One of the participants in Tuesday's mass-nursing, told ANSA that, when she breast-feeds in public: "They give me evil looks, but I do it anyway."

Although the World Health Organization has labeled breast-feeding "the ideal way of providing young infants with the nutrients they need for healthy growth and development," many societies still feel squeamish about seeing women breast-feed in public.

In England, for example, breast-feeding in public can still be punished under public order laws and laws of public decency. That will soon be changing, though, as the government hopes to push through new laws by the end of the year.

"We intend to make clear in the equality bill that it's not acceptable for women who are breast-feeding their babies to be shooed out of restaurants, public galleries and other public places," Harriet Harman, the leader of the House of Commons, told MPs last Thursday, according to the Guardian.

A similar nurse-in was held in November 2006, when women gathered to nurse in public at 31 airports throughout the United States to protest after a flight attendant kicked a passenger off a plane for breast-feeding her daughter.