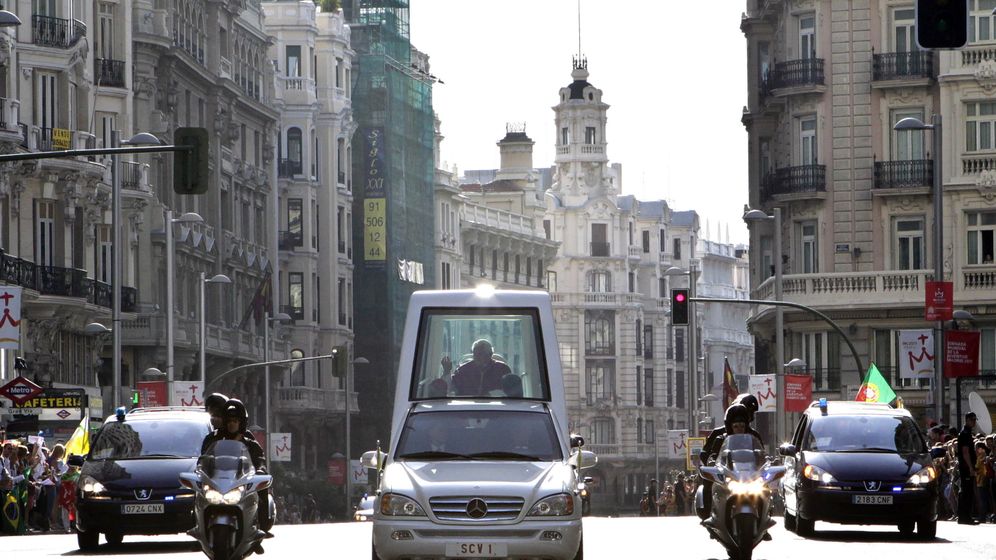 Photo Gallery: The Popemobile Over the Years

When it comes to cars, German Chancellor Angela Merkel and German President Christian Wulff have been shortchanged. While they're chauffeured around the country in comparatively humdrum limousines, their most recent state visitor's car attracts widespread attention.

When Pope Benedict XVI kicks off his "giro di Germania" on Thursday, he won't be sitting in just any luxury sedan, such as an S-class Mercedes, Audi A8 or 7-series BMW. Instead, he'll be perched on his throne in the popemobile. With its pearlescent paint and gold trimming, it's the most famous company car in the world.

It's license plate reads "SCV-1," which stands for "status civitatis Vaticanae," Latin for "state of the Vatican City." And, of course, the "1" is an unmistakable indication that it belongs to the pontifex maximus -- or, in other words, the boss.

The history of this one-of-a-kind government vehicle stretches back more than 80 years. In the summer of 1930, Daimler-Benz gave Pope Pius XI a stretch version of its Nürburg 460 model. The Holy Father was thoroughly impressed by the vehicle after taking it for a spin around the gardens of Vatican City. In the Mercedes archives, it is noted that he raved about the car as "a miracle of modern engineering."

Since then, there have been close ties between the Vatican and Mercedes. Indeed, having supplied the Holy See with more than a dozen luxury vehicles, the company can claim with some justification that it has become an official purveyor to the court -- or perhaps the garage -- of the pope.

Although the first popemobile boasted a degree of luxury befitting a king, in technical terms, it was still no more advanced than the average cars coming off production lines at the time. It would still be a while before the pope's car was constructed in a more elaborate way. Such modifications would include wider windows, removable roofs and a throne-like seat in the back for the pope to sit on while waving benevolently to throngs of believers at a snail's pace.

Since the attempt on Pope John Paul II's life in May 1981 in Rome, several popemobiles have also been outfitted with armor plating and bullet-proof glass. With all the extra weight, it's hardly surprising that the modified M-Class Mercedes currently serving as the popemobile weighs almost three metric tons and has a transmission specially designed for slow driving.

But Mercedes isn't the only company with bragging rights for building popemobiles. In fact, insiders put the number of vehicles in the papal fleet at more than 50. These include a Cadillac Deville, a Ferrari Mondial and a Seat Marbella.

Will the Popemobile Go Green?

In the run-up to the pope's current visit to Germany, there were persistent rumors that the pope would be getting a new car -- and one with the most cutting-edge technology available. "If someone could offer an electric car that was functioning, efficient and befitting his rank, the Vatican would take it," said Cardinal Giovanni Lajolo, who will soon be stepping down from his position as a senior official in charge of the Vatican's more earthly concerns. Since Mercedes is currently introducing a third-generation M-Class SUV with a hybrid engine, observers had speculated that a new popemobile was also on the way.

But Joachim Schmidt, the head of sales and marketing at Mercedes, put an end to the guessing right before the pope's trip. He said the company had not built the pope a new car for this visit. Instead, both of the popemobiles based on earlier M-class models had undergone "major servicing." Likewise, he refused to say whether and when Mercedes would be providing the Vicar of Christ with a new ride.

Schmidt also said nothing about rumors a more eco-friendly drive system for the popemobile would be built. He did, however, say that Benedict XVI's security detail was apparently not sure they wanted to rely on an electric motor in an emergency situation.

Still, Thomas Weber, the head of development at Mercedes, believes that the new technology could convince Vatican officials. "We find the idea of an electric popemobile fascinating and would be happy to collaborate with the Vatican on this project," he said. "And we already have some initial ideas for it."

11 Bilder Photo Gallery: The Popemobile Over the Years