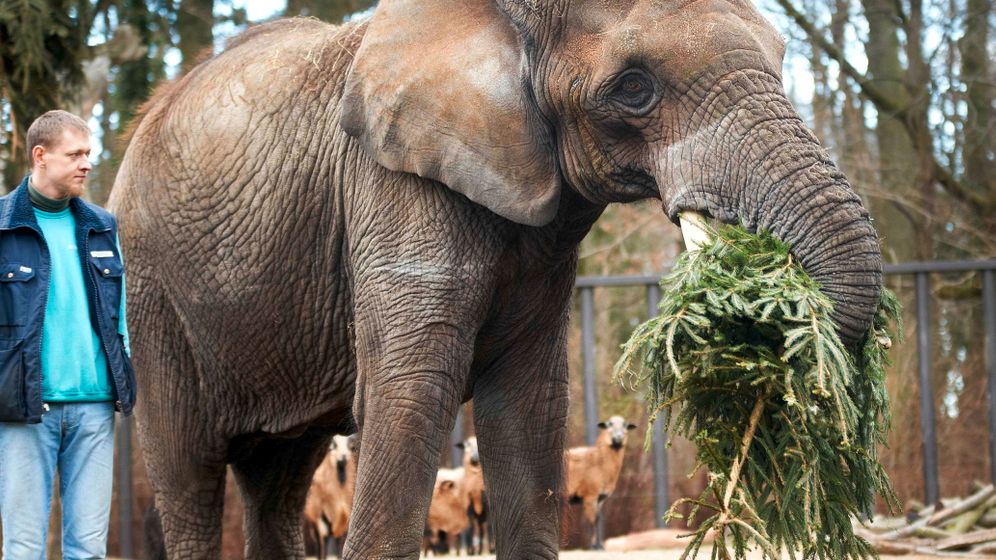 Photo Gallery: A Festive Feast for the Animals

One eats seals and lives on ice; the other is a predator in sun-baked climates. But in Germany's zoos, both polar bears and leopards seem to share a passion for the smell of Christmas.

Indeed, it is a strange sight each January when zoos across the country begin feeding Christmas trees to animals. These aren't the trees one sees cast on sidewalks from city homes, but rather fresh pines from vendors who do not use chemicals on the Tannenbaum.

Christmas trees have long delighted children and families, but zoo workers say they also uplift the spirits of wildlife. "The smell of Christmas trees encourages polar bears and leopards to behave in an explorative and playful manner," explains Ulrich Schürer, director of the Wuppertal Zoo, where staff have been delighting local animals with one Christmas tree after the other for days now. The zoo says it has served up around 800 since the holiday feast for the animals began on Dec. 24. And it's not just predators who are munching away on the pines.

"The elephants, camels, stags and mountain goats eat the bark and needles," says Schürer. It may seem a bit unsual, but the supplementary gourmet diet actually helps the elephants' digestion system, giving them roughage.

At Stuttgart's Wilhelma Zoo, spokeswoman Karin Herczog says that hoofed animals in particular love the holiday treat. She also points out that pine needles are rich in Vitamin C, noting that people have used pine needle tea as a natural remedy for scurvy.

At the Magdeburg Zoo, it's the Asian lions who are enchanted by the arboreal treat. "The smell stimulates them and gives them something different to play with for the sake of variety," says Regina Jembere, a spokesperson for the zoo. Latin American animals seem to have the keenest appetite for them, she says. "The pacas and llamas seem to especially enjoy the Christmas trees we feed them," she adds.

"We've been doing it for years. It's sort of necessary," says Florien Geese of the Berlin Zoo, commenting on the unusual recycling process. "Besides, the elephants love eating the trees."

Unfortunately, it is also a picturesque European tradition that appears to be threatened -- at least at some zoos. "The fact of the matter is that we hardly accept any Christmas trees anymore, because, increasingly, they are treated with chemicals to make them last longer or to render them inflammable," says Wilhelma Zoo's Herczog. "Then the trees are no longer tasty for the animals. And they notice it too, even if you can't see the chemicals on the tree. Besides, trees like that would be harmful to the animals."

And while such reports of cute animals enjoying a little holiday fun are popular with newspaper readers, Herczog says many people gloss over the detail, and they can actually lead to an increase in the number of tree sellers with good intentions who offer to donate their unsold inventories to zoos. "We unfortunately have to disappoint all of them," she says, explaining that the zoo needs to be absolutely certain that the trees haven't been contaminated with chemicals.

And what happens to the estimated 29 million Christmas trees that were sold in Germany this year after the festive season ends?

The Berlin waste management company BSR, which collects around 400,000 Christmas trees each year, says that many are then shredded, recycled as wood chips and finally used in the production of wooden pellets. Practices differ from city to city, with some burning discarded Christmas trees to generate heat and electricity.