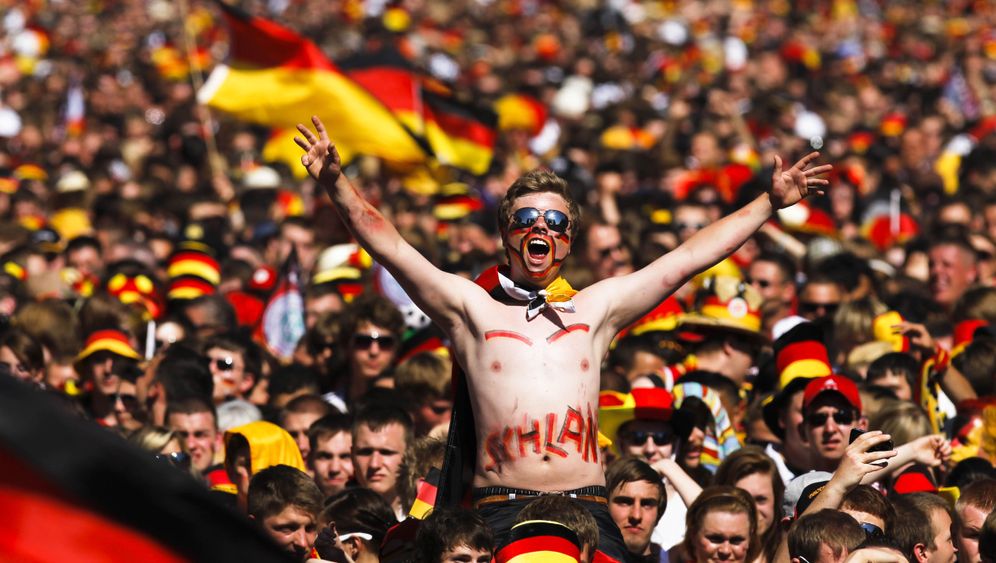 Like a football chorus in perfect tune, all major German newspapers are hailing Germany's 4:1 victory over England at the World Cup in South Africa on Sunday as "revenge for Wembley."

Some have even got religious about it, praising the "god of football" for handing down divine justice in the form of a blatant referee error that robbed England of a crystal-clear goal on Sunday. At last, commentators say, Germany has been avenged for 1966, when England had a goal wrongly allowed in the legendary World Cup final at London's Wembley stadium, which England won 4:2.

The cathartic outpouring of Teutonic emotion reveals how traumatic the incident 44 years ago must have been for a nation that is every bit as football crazy as the mother country of the game.

It is true that the circumstances of midfielder Frank Lampard's shot on Sunday were uncannily similar to the referee error that went in England's favor in 1966. Then, Geoff Hurst's strike bounced down off the crossbar and was counted as a goal, even though it didn't cross the German line.

In German newspapers on Monday there is fierce criticism of football's governing body, FIFA, for persistently refusing to allow video evidence that would prevent mistakes. There have already been several glaring errors at this year's World Cup.

But there is no sense in editorials that the referee may have deprived England of victory. And why should there be? It seems that England coach Fabio Capello, who faces mounting calls to quit, is the only person who believes his team could have won even if Uruguayan referee Jorge Larrionda and his assistants had done their job properly. 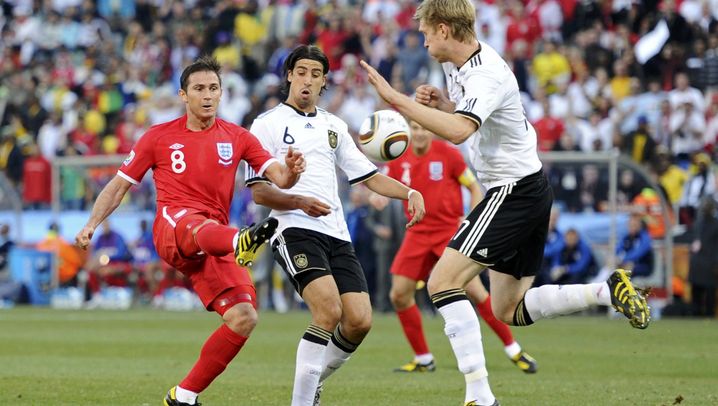 On both sides of the Channel, football pundits agree that the fast-paced, slick young German team made England's supposed "golden generation" look like a bunch of ageing amateurs playing football in the park after a boozy lunch.

England's dismal performance in the four World Cup matches has led to calls for fundamental reforms of English football, including better coaching of young talent and fewer league games. Critics have also called for the curbing of the powers of the money-spinning Premier League, which has attracted some of the world's best foreign talent but done little for the national team since it was created in the early 1990s.

Germany, meanwhile, is in a state of flag-waving ecstasy after humiliating its arch-enemy. Commentators are waxing lyrical about the team's uncharacteristic lightness, speed and intelligent passing that distinguish it from past German sides that got through to finals with "iron feet, iron calves and an iron will," as one editorial writer puts it.

So far though, amid all the joy, no one has dared to point out that Germany hasn't faced a top-class side yet in this tournament. That will change on Saturday, when they play on-form Argentina.

England and Australia played so badly that they allowed Germany to shine. In the other two matches, when coach Joachim Löw's men came up against stiffer resistance, they struggled, losing 1-0 to Serbia and narrowly beating Ghana 1-0.

On Monday, mass-circulation daily Bild ran a banner headline that read "Thank You, God of Football!" and juxtaposed photos of the two controversial goals -- Germany's in 1966 in the World Cup final in Wembley and Sunday's goal by Frank Lampard. It writes:

"The curse of Wembley has at last been broken. This time England had a goal stolen. (...) Wembley was annulled yesterday. Dear people of England, now you know how we felt the whole time. Angry over so much injustice, robbed of the title (...) This cursed football moment was passed on from generation to generation. Now it is broken. We admit unreservedly: It was a goal yesterday, you were cheated. But now you must confess that Wembley wasn't a goal either.

"Dear people of England, let us draw a line under this together. And look forward to great encounters between our teams in the future."

"Sorry, we're quits," writes conservative Die Welt in a headline on a match report brought forward to page 3. In a front-page editorial, it writes: "In the history of German football, there have been many successes but they were expected, hard-fought and enforced. Achieved with limited skills, with accomplished destroyers who made life difficult for the star opponents, with iron feet, iron calves and an iron will. Often our national team was strangely alien to us. We wanted to love them, but were unable to. They often found their way into the semi-finals and finals, but rarely into the hearts of the fans.

"Everything is different with the team of coach Joachim Löw. Germany is attached to his team (). Our national team can play football. Fast, lively, surprising. They can win without destroying their opponents. And they can lose -- with their heads held high, with decency, style and taste. With this team, we're no longer the cold, merciless football power."

"In one respect, the performance of the listless donkeys from the Island (editor's note: 'The Island' is a faintly dismissive term Germans occasionally use for Britain) was the epitome of an anti-classic. The match buried two legends in one go. Since Sept. 1, 2001, the English seriously believed that they played better football than the Germans. On that day, they won 5:1 in Munich. The fact that even Emile Heskey scored -- Heskey, who usually wouldn't be able to hit the front of Buckingham Palace from 2 meters -- led them to this curious exaggeration of their own capabilities.

"But what is far more important is the end of a myth that in the last 44 years has produced the liveliest exchanges in German pubs. The famous Wembley goal (...) has been a thorn in the side of German football. This goal was regarded as a screaming injustice by people in this country. That is over, now that the English have suffered a similar fate in a worse form. But one legend has survived: the English won't win a match against Germany until they decide to field a goalkeeper."

"After a few days of anger, England may realize that it wasn't good enough at this World Cup, especially Wayne Rooney. He was meant to be England's savior, but he never really arrived in South Africa. His compelling form in the Premier League got lost somewhere on the 10,000 kilometer journey."

"The World Cup in South Africa got its first scandal yesterday. It is ridiculous that referee Jorge Larrionda and his assistants didn't see how clearly a shot by the Englishman Frank Lampard crossed the line of the German goal. But it is worse that the world association FIFA continues to forbid mistakes like this from being corrected. It categorically rejects the use of video evidence to clarify disputed and match-deciding incidents. It quickly reaffirmed this stance in a press statement after the final whistle.

"Video evidence in football has been demanded a thousand times, but it will probably never be introduced. FIFA, which in its rampant commercialism insists on controlling the signs on even the smallest sausage stand to make sure it doesn't lose a single cent of sponsorship money, is allowing the biggest nonsense to happen on the pitch, in its core business.

"FIFA is following the pseudo-romantic notion that football lives from mistakes, that they make it human. But the truth is that if mistakes like yesterday's become part of the routine, football will die. It will turn into a lottery that no one wants to watch.

"The fact that simple technology like a camera is forbidden in this highly modern business is a joke. If football were even remotely important to FIFA President Joseph Blatter and his fellow officials, they would have given in to the demands from all over the world long ago. If they wanted to do justice to the game, they would now sink into the ground with shame. But they will defy the debates triggered by Sunday's goal.

"The only good thing about this unrecognized goal is that such a blatant case in such a high-level match on such a large stage will have shown the whole world what a nasty game FIFA is playing."