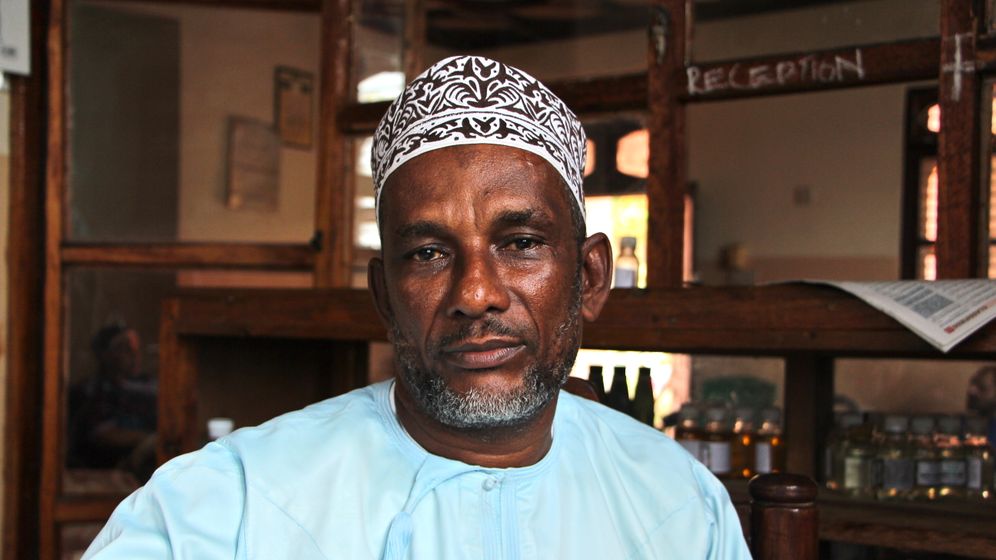 The doctors at the hospital couldn't help the woman with the numb cheek. So, this morning, she has somewhat timidly arrived at the office of the healer Madava, who begins by asking about her bowel movements.

"How often did you go to the bathroom yesterday?" Madava asks.

"Not at all," says the young woman.

"And the day before that?" Madava asks.

"Not then, either. The last time was three days ago," she says. "But I'm here about my cheek."

"How many times do you eat in a day?" Madava asks.

Madava grabs a sheet of paper and starts to make calculations. "Two days of three meals makes six meals. Plus today's breakfast makes seven," he mumbles. "Let's figure about 600 grams of food on average per meal." He looks up from his paper and into the woman's eyes. "There are probably more than three kilos in your body that need to get out," he says. "And you're surprised that something hurts, whether it's your cheek or something else?"

Madava -- or "Mr. Madava," as most people on the island call him, is the most respected medicine man in Zanzibar, the archipelago in the India Ocean off East Africa. But, for some time now, it hasn't just been patients from all corners of the islands who have been coming to him. People cross over from the mainland and even fly in from Canada, Germany, Oman and South Africa. They have as much faith in the healing powers of his herbs as they do in his philosophy of prevention.

Madava's office lies in a one-story building in the northern part of Zanzibar City, the capital of this semi-autonomous part of Tanzania. It is surrounded by a white wall and papaya trees, which provide a bit of shade to the chickens in the courtyard. On this Sunday in March, it is a muggy 35 degrees Celsius (95 degrees Fahrenheit) in the cramped examination room. There is a fan on the ceiling, but there has been no power on the island for hours.

The young woman with the numb cheek is fanning herself. Madava calls out to an assistant. The door to a side room opens, revealing women sitting on the floor grinding herbs. The smell of cardamom fills the room. The assistant brings a plastic bottle holding a viscous, dark-brown potion. Madava explains its ingredients: ground carob tree seeds, ginger, cinnamon and mint, all crushed into a powder and mixed with honey to make a laxative. "When everything is back to normal with her dietary cycle, things will soon improve with her cheek," he says.

He can't remember when people started calling him Madava instead of Mohammed Said Ali, his given name. He never doubted that he would have this name at some point, as did his father, his grandfather and his great-great-grandfather before him. This is now the fifth generation of Madava medicine men. They obtain their medications from what grows naturally on Zanzibar. The healer uses mint as an antiseptic, ginger against pain, cinnamon as an aphrodisiac and lemongrass against yeast and other infections. Saffron, cardamom, pepper and coconuts also grow on Zanzibar. Madava makes drinks, ointments and oils from their fruits, roots, shells, blossoms and bulbs.

So far this Sunday, Madava has massaged a 3-year-old boy with a weak immune system for the seventh day in a row. He has also given a young man with erectile dysfunction a bottle of "natural Viagra." In the waiting room sits an elderly woman who is recovering from a stroke. Later in the day, he is supposed to see a woman tortured by jealousy because her husband just took on a second wife. Some days he sees up to 80 patients.

For these people, Madava is a doctor, a therapist and a life coach. If you take him for his word, he is fairly successful at playing all these roles. But he says the skeptics should just watch the video about a man named Suleiman. When the Oman native was brought to Zanzibar two months earlier, he was plagued by epileptic seizures that would send his body into spasms six or seven times a day and sometimes even leave him unconscious. That is the description Madava gives, and Suleiman seconds it.

Doctors in India and Oman had reportedly wanted to open his skull and examine his brain. They planned to perform an operation, but they weren't sure which one. The video shows a drooling, 50-year-old man who has to be fed, who struggles just to lift his head and who can't walk unassisted. It shows a man 1.8 meters (5' 11") tall weighing only 32 kilograms (70 lbs.).

Today, Suleiman is wandering through the office, greeting patients with handshakes and a smile. He eats lunch with Madava, corn porridge and fish. No one has to assist him. He says that Madava's aromatherapy saved him.

Principles to Live By

When residents of Zanzibar don't feel good, they go to Madava. When he can't help them, he sends them to the hospital. With foreigners, he says, it's the other way around: After spending years going from one specialist to the next, seeking treatment in several countries and still not getting any better, they come to him. They often suffer from skin ailments, chronic back pain or diabetes.

"They could save themselves all the flight costs," Madava says, "if they just took care of themselves beforehand." He is convinced that people don't get sick if they pay attention to two things. Regular sex keeps one's hormones from damming up. (Madava himself has four wives and 39 children.) But even more important is proper nutrition.

For years, Madava has been traveling to places like New York, Rotterdam and Berlin to give talks about his philosophy of medicine and nutrition. There, he tells people the same things that he says every day to his patients in Zanzibar, such as the woman with the numb cheek.

Madava takes out another sheet of paper and draws a circle. Then he traces three lines through it, creating six pie-like sections, which he fills with the words, "air," "water," "fruit," "vegetables," "rice/bananas," "fish/meat." He says this is all the body needs. Just a bit of each -- and no more.

Following this principle, he tells the woman, his father lived to be 122. Madava, now 63, says he hasn't been sick a day in his life.