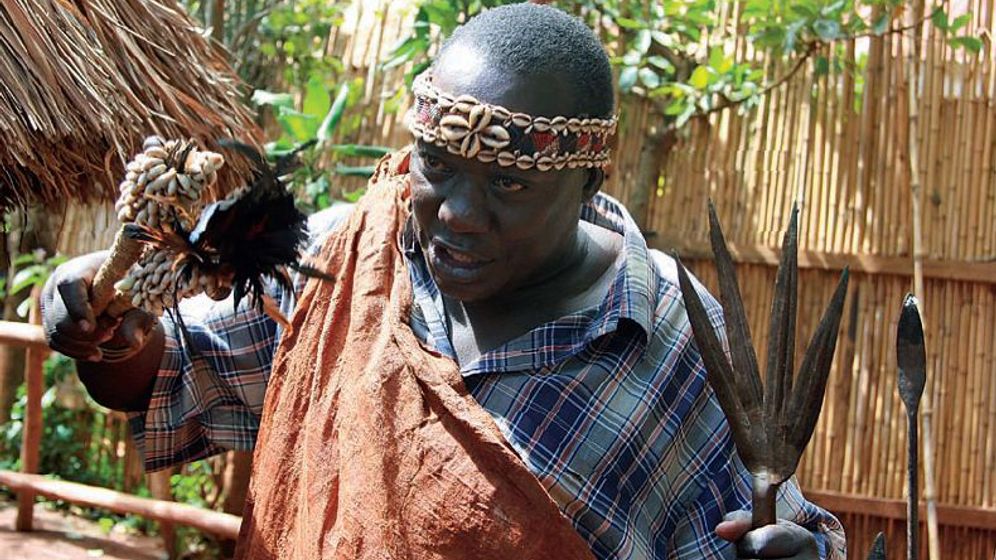 Aliyu Mbenkem and Julienn Aboude are absolutely convinced of their magical powers. The two faith healers live in a village called Akolinga in the West African nation of Cameroon, around three hours north east from the capital Yaounde by car. I'm on the road with two colleagues and we have come to pay the faith healers a visit. We have come because we want to know more about their powers. Can they influence the outcome of a football game?

"That's nothing. All I have to do is cast a few shells and contact the spirit of the playing field, then our own goal will be nailed up and the opposition's goal will be wide open," the magician Mbenkem says. He doesn't offer any more details. No teams, no matches. We thank him and drive on.

And When the Path to the Stadium is Bewitched?

But what does one do when a spell has been cast? In the 1980s, sports development specialist Holger Obermann was working as trainer of FC Wallidan in the Gambian capital of Banjul. He had decided to ignore any witchcraft worries and just play the game. But shortly before the team was supposed to meet Sierra Leone in the West African Nations Cup, there was a sudden panic.

"I was ready for a lot -- but not this," Obermann wrote in his memoirs. "Biri was pointing fearfully at a green powder, which was strewn at irregular intervals along the narrow path to the stadium. It reminded me of laundry powder, maybe some sort of powdered paint. 'The path is bewitched,' Biri cried out agitated and the other players immediately agreed." The players refused to go further. They were not so foolish as to start a conflict with supernatural powers. The team rebelled, and Obermann was in a difficult position. "We had to act," he wrote.

So as not to miss the game altogether, the coach herded the players onto a bus. He took the steering wheel himself and "sped along the narrow path at high speed" while all aboard "were thrown around." The team arrived just a few minutes before the start of the game. And won, 2:0. It was a close call.

Not everyone is as lucky. At the 2002 Africa Cup, Camaroon trainer Winnie Schäfer had to do without his co-trainer Thomas Nkono because, just prior to the semi-final, he had been seen burying bones under the turf and spraying a strange elixir, in order to cast a spell on the playing field. Nkono, a legendary African goalkeeper, was arrested and led away in handcuffs and had to spend the night in police custody. Although that was probably a good thing given the threats he had received from his team's semi-final opponent.

Despite Nkono's antics, a former teammate of his doesn't believe in the power of witchcraft. "There is no magic in football," Roger Milla once told a reporter from France Football, a bi-weekly French football magazine. "And Cameroon is proof of this. Our country is not strong in witchcraft. But our football is better than in those nations where magic is so strong -- countries like Benin, Togo or Nigeria."

The Confederation of African Football likewise doesn't want to hear about magic anymore and have banned witchcraft. No substances may be sprinkled over the playing fields and there can be no witch doctors on the bench with the teams.

This regulatory measure was likely seen as necessary after a game between the Rwandan and Ugandan national teams. The Cranes, as the Ugandan team is nicknamed, had shot and missed five times, the ball narrowly missing the goal or hitting the posts. The goal was jinxed, as it were. Before long, however, it became clear why. Naturally it was not due to any team member's personal sporting inadequacies. Rather, it was all due to an extra pair of gloves dangling from the Rwandan goal keeper's net, which were "nailing shut" the goal. "Magic hands! Witchcraft! Cheating!," the people yelled. There was rioting: The players themselves fought and the audience stormed the field. The whole circus lasted five hours. And the Rwandans left the field 1:0 victors.

And then there is also the legendary story that is told about the Ivory Coast team, which won the Africa Cup of Nations final in 1992 after a penalty shoot-out 11:10. The fans credited the victory to the witch doctors who had been employed by the Ministry of Sport. The witch doctors themselves said that their services had been commissioned by the Ministry but that they had never been compensated for their services.

As a result, they cursed the national team. And indeed, the Elephants, as the team is known, won nothing for years. Finally, a decade later, the country's defense minister apologized to the aggrieved witch doctors on behalf of the nation for "the 1992 promise that was not fulfilled after the Africa Cup." The minister also offered the witchdoctors $2,000 (around €1,670) and asked them to start working for "the republic and the sports minister" again.

"They bend the lines, bewitch the ball, befuddle the referees (and) paralyze goal keepers," Bartholomäus Grill, the Africa correspondent for weekly newspaper Die Zeit, wrote about the witch doctors -- and sometimes their mischief making even leaves the field. "For example, when Shamo Quaye, who was playing professionally in Sweden, came home to Ghana to collect debts from his old team, he was bitten by a poisonous snake while at supper. He died on the way to hospital. The whole country had only one explanation: Juju, black magic."

"Just as every German team has a masseur, every African team has a witchdoctor," says Anthony Baffoe, a Ghanaian footballer who played for years in Germany's top league as well as for Ghana's national team and who now works for the Ghana Football Association. German filmmaker Oliver Becker tells of watching a Tanzanian player anoint the grave of a deceased teammate with chicken blood so that he might acquire the dribbling skills of the dead man, for himself. And the Botswana Sports Magazine has even felt it necessary to inform citizens that: "There is no evidence that football games can be won through witchcraft alone."