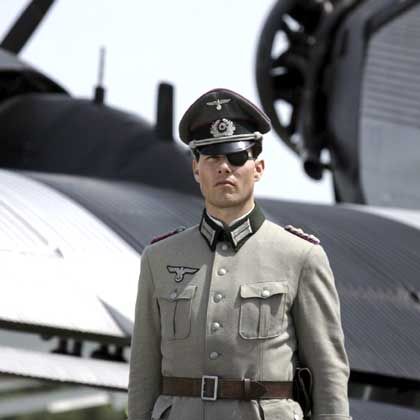 U.S. actor Tom Cruise dressed in his role as Nazi German Col. Claus von Stauffenberg during the production of 'Valkyrie', near Berlin.

After more than a month of filming in a country whose press is often quick to vilify him for his membership in the Church of Scientology, Tom Cruise has spoken to a German magazine about his current film role and life in Berlin.

Cruise, 45, along with wife Katie Holmes and daughter Suri are staying in Berlin for the filming of the World War II drama "Valkyrie." In the film, scheduled for release in 2008, Cruise plays Colonel Claus von Stauffenberg, an army officer of aristocratic lineage who was executed following the failed July 1944 attempt to kill Hitler.

In Germany, Scientology is not considered a religion, but rather a cult and business that preys on the vulnerable. Cruise's affiliation with the organization has led to widespread criticism of the actor in Germany. Newspaper reports have bemoaned the selection of Cruise to play the historical person who some consider to be one of the few prominent heroes of the Nazi era. Even one of Stauffenberg's sons told the Süddeutsche Zeitung that he wishes Cruise would "keep his fingers off my father."

Despite the brouhaha in the press, Cruise told the German entertainment weekly Bunte that his reception on the streets of Berlin has been warm. And, whereas numerous politicians have voiced their opposition to the film and Cruise's involvement, the government agency responsible for promoting film production in Germany has pumped €4.8 million ($6.5 million) in subsidies into the production.

As far as Cruise is concerned, this is a fantastic film that will show a new and surprising face of wartime Germany to the international film audience. He also claims to have spent eight months preparing for the role and to have grown to greatly admire the character he is playing.

'I Want to Think Positively'

"I feel it's important to show that there was also resistance within the Nazi ranks," he added. "I think most people will be surprised. But the film goes even further than that. We hope to be able to show how people can preserve and even transcend their humanity even in the darkest periods."

Cruise also believes that the film is more than just another of innumerable World War II films.

"This is not a war film," he told Bunte. "This is a thriller that takes place in wartime. It's about a secret mission, a plot, conflicting loyalties, soldierly honor, patriotism, morals and conscience."

In the interview, Cruise also gushes over the man he is portraying, even saying that he didn't consider the uniform he has worn during shooting to be a Nazi one. "He rejected Hitler. He came from an old military tradition and was ashamed of what had happened in Germany under Hitler. He was prepared to risk everything, including his own life. What a decision! What courage! What a love for your own country!"

As for the critics, Cruise brushes them off and suggests that they wait and see the film before firing off all their cannons. "I don't want to talk about that," Cruise told his interviewer. "I want to think positively and concentrate on the film."

Asked about the city of Berlin itself, Cruise praised the fact that he could walk in the parks at night with his family and still feel safe.