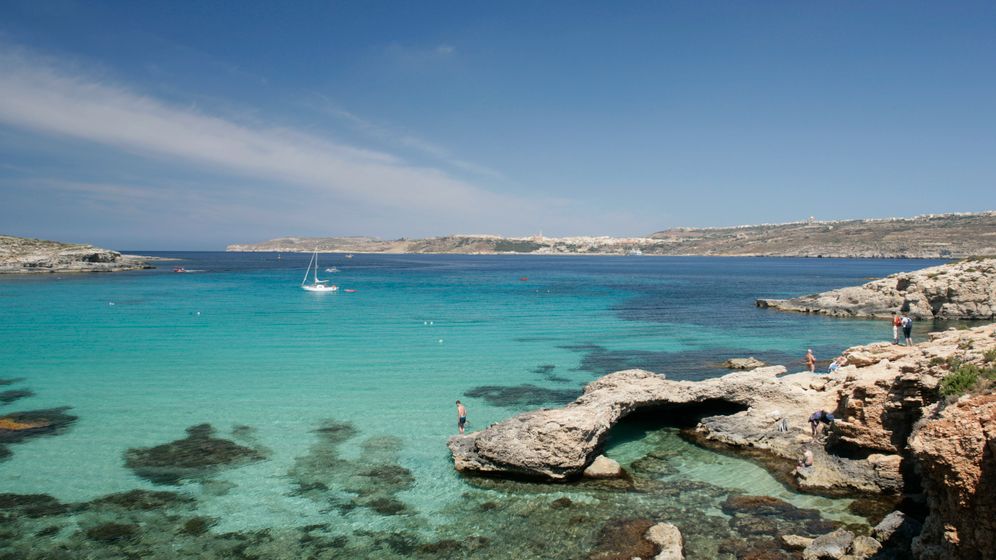 Seychelles? Maldives? Bora Bora? The very idea of a deserted island awakens dreams of long, lingering sunsets, unspoiled natural beauty and endless seascapes without another human in sight. But who knew all this could be found without leaving Europe? Far from the chintzy tourist resorts of Majorca, there are several remote island destinations for the intrepid. Here are some of the best.

This island is definitely not for those in a rush. Thirty-five kilometers off the southern coast of Crete, Gavdos is located in the Libyan Sea. Ten miles long and five miles wide, it is thought by some to be the mythical home of the nymph Calypso, who kept Odysseus captive for seven years. The mail boat comes by five times a week. Those who disembark will discover a striking green island with secluded sandy beaches tucked up against vertical cliffs hundreds of meters high. The pine-covered dunes at hippie beach Agios Ioannis make a lasting impression.

Not even 100 people live permanently on Gavdos. The island bus commutes only in July and August through cedar and juniper forests between the capital, Kastri, and Sarakiniko beach. There are, however, a dozen taverns and bars on the beach as well as a few simple guesthouses. And ultimately, every visitor to Gavdos travels at least once to Tripti Bay, Europe's southernmost point. There you'll find a natural rock arch on which a Greek artist has placed an oversized chair. To sit there is a truly uplifting experience.

Footprints in the Sand

Croatia's Susak is a tiny miracle: it's the only sand dune island in the Mediterranean. How the island formed remains a puzzle to scientists. Those arriving to the small island -- a mere 3 kilometers long and 1.5 kilometers wide -- on the edge of Kvarner Bay will be less puzzled. They have taken a liner from Mali Losinj and can now look forward to Susak's soft beaches and bamboo-fringed sand paths.

On Susak almost everyone gets around by foot -- the island is car-free. There are no hotels, just a number of pretty, renovated old fisherman houses. At the two villages on the island, connected by stairs, quaint guesthouses serve freshly caught fish and island wine harvested in the sand.

The glamorous tourist islands Ischia and Capri are still within sight. But on Procida, there is little trace of all the hubbub and glitz. It is mostly just locals on the small Italian island. In the historical center, also called Procida, houses in shades of pastel-pink, white and yellow contrast with the deep blue Gulf of Naples. Fragrant lemon and orange trees are scattered throughout the singular island.

You can take in an unforgettable view of the island from its highest point, the Terra Murata hill, in the fishing village of Corricella with its maze of interlaced houses. And visitors can stay in stylishly outfitted former Neapolitan palaces such as the 18th-century Casa Sul Mare.

Madeira is entwined with flowers, but the Portuguese island in the Atlantic offers almost nothing in the way of sandy beaches. Those you'll find just a 15-minute plane ride away -- on Porto Santo. Locals call it "The Golden Island" because of the prevailing warm shades, from yellow to ocher, on the small island.

Because Porto Santo is located in the middle of the Gulf Stream, tourists can swim in the sea in winter. The biggest attraction is the nearly 10-kilometer-long sandy beach Campo de Baixo on the south coast. There are around a dozen hotels in the main town, Vila Baleira. The house where Christopher Columbus is said to have made the decision to sail to America attracts only a trickle of visitors. The regulars hope it will stay that way for many years.

Only the two-kilometer-wide strait of El Rio separates Graciosa, the smallest inhabited island of the Canaries, from its big sister Lanzarote. In the semi-circular harbor, fishing boats bob up and down. A few whitewashed houses are scattered around the shore. Just 700 Spaniards live here in the fishing village of Caleta del Sebo and the tiny settlement of Pedro Barba. Except for a few stray Land Rovers, there are no cars.

The few tourists who come stay in a surprisingly comfortable apartment complex. For variety, visitors can take a one-hour hike across the island over the dunes, past the volcanic cones to the white sandy beach of Playa de las Conchas. There, even Robinson Crusoe might grow lonely.

Crime fans know: One of the best Maigret books takes place on the village square of Porquerolles. By the time the detective devours his bouillabaisse in the island restaurant Arche de Noé, many readers had probably resolved to one day visit the Côte d'Azur. Georges Simenon described the leisurely island life of Porquerolles in "My Friend Maigret," back in 1949. But the French island is almost sleepier now than it was then.

In the 1970s, the island became part of Port-Cros National Park -- since then, no one other than the 350 permanent residents have been allowed to drive cars there. Guests can explore the 8-kilometer-island by bicycle. There they'll find the village square with its picture-perfect village bakery, and the Arche de Noé restaurant, which still exists. There are also three lovely beaches. And for those sunning on beach towels on the silvery Plage d'Argent, it is a matter of honor to pull a detective novel out of a picnic basket.

Into the Blue Lagoon

True treasure lies under the sea: Comino's top attraction is its fantastically beautiful Blue Lagoon. Divers love the turquoise bay with its floor made of yellow sand. Otherwise, the only other attractions on the 3-square-kilometer island are tranquility and the murmur of the sea.

Like a small child, Comino is guarded by the two larger islands of Malta and Gozo. Its name derives from the Comino cumin, which once grew here -- today, its 20-meter-high plateau smells mainly of thyme, rosemary and oleander. Aside from a medieval tower and a small chapel on the island, there is only one building: the Comino Hotel with its own sandy bay and a few bungalows. From there you can gaze dreamily at the sea and the neighboring island of Gozo.

Holiday in the Buff

It is one of the most remote places in Europe: the 13-kilometer-long Large Beach of Ulcinj where Montenegro ends and Albania begins. Just before the border river of Bojana flows into the sea, it splits in two and forms the island of Ada Bojana. A nudist camp has resided here since the Tito regime.

Gone are the days when travelers had to be ferried across to the island in a converted military SUV. Today you just go over a bridge. Simple bungalows stand in the middle of a green field. On the beach there is a strict prohibition against threads of any kind, and the lifeguards are as strict as ever. Those who stay on the west bank of the Bojana river -- to eat at one of the excellent fish restaurants there, for instance -- can keep their pants on.