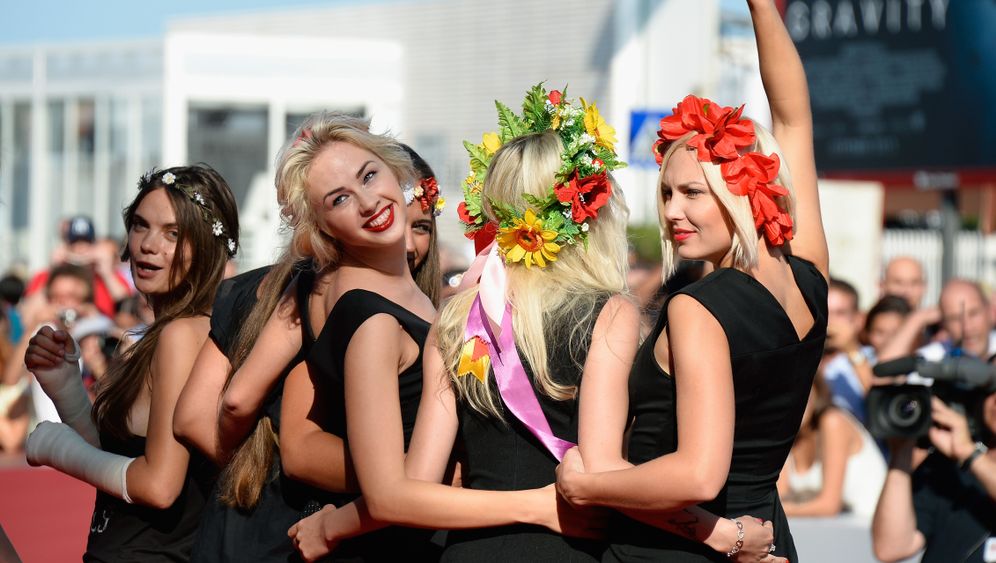 It's a ruinous revelation: Behind Femen, the militant feminist group waging war against the patriarchy, a man is pulling the strings. Worse, he's a man who berates the young women before sending them out on the streets for one of their topless protests. That's what's been captured in a recent documentary film that's released a flood of headlines around the world voicing shock, outrage and, above all, schadenfreude.

All those who shook their head at the group's bawdy brand of Ukranian feminism can now feel vindicated. When young, attractive women walk half-naked through the streets, there must be a man behind it. It was obvious from the start. Others say the revelation destroys the feminists' credibility. "Now everything concerning Femen must be totally reexamined," agonized the German daily Süddeutsche Zeitung.

But anyone who thinks the documentary has finally exposed the true face of Femen may be mistaken. For one thing, there remain many questions as to the role of the group's supposed patriarch. Secondly, the revelation seems all too fitted to the script of a Femen-style publicity stunt.

The first act: The documentary "Ukraine is not a brother," which to date has only been screened at the Venice Film Festival, leaves little room for doubt. In it, Victor, a man in his mid-30s, orders the women around and derides them as unprofessional. "He hand-picked the prettiest girls because the prettiest girls sell more papers ... he is Femen," the film's Australian director, Kitty Green, said in an interview with Britain's Independent newspaper.

Toward the end of the film, Green asked him whether he started Femen to meet women. "Perhaps yes, somewhere in my deep subconscious," he answered. Not surprisingly, this answer was fodder for journalists, who responded with a barrage of outraged articles.

The man in question is Victor Svyatski, a 36-year-old political scientist who, like the Femen founders, comes from the city of Khmelnytskyi in western Ukraine. He has been involved with the group since it was first established in 2008.

'Dictatorship of the Phallus'

It's not a new revelation that Svyatski plays an important role in the Femen universe. In Ukraine he has repeatedly been referred to as the group's puppet master. When journalists visited Femen's recently vacated headquarters in Kiev, it was Svyatski who often answered the door. He worked in the background, together with Anna Huzol, the self-styled founder of Femen who also refrains from taking part in topless protests. He was seldom mentioned in the group's press releases, though he sometimes made an appearance as the group's "ideologue" or "political adviser."

He hardly ever spoke publicly for the group. But one interview conducted by an American scholar with Femen founder Huzol in 2009 is now attracting attention. Although the interview is with Huzol, Svyatski soon inserts himself into the conversation. Not too long after, he takes over almost completely, presenting himself as an über feminist, discussing the "dictatorship of the phallus" and why activism is sexy.

It seems clear that the leaders of Femen tried to minimize, if not entirely obscure, Svyatski's role in the operation. The German Femen activists in Hamburg and Berlin were also apparently in the dark about his involvement. To them, he was merely an "office worker in Kiev." The German women themselves have not yet seen the film. German Femen activist Zana Ramadani would only say the following: "I know my sisters, none of whom would let themselves be used like a marionette."

Nevertheless, there are indications that the unveiling of Svyatski has not somehow just come from out of the blue, as is now being suggested in the press. The trailer of the film advertises a big revelation and shows a man wearing a rabbit mask that will be removed in the film. The director appeared in Venice donning a Femen flower wreath, flanked by several of the group's founders, who posed topless with her for photographers.

Femen long proved themselves masters of the media game. Less than 24 hours after the first report -- cue Act 2 -- Inna Shevchenko, one of the group's leaders, replied to the accusations in an opinion piece for Britain's Guardian newspaper. Svyatski, she said, "is not a founder of Femen, nor a creator of our topless strategy and ideology." However, wider societal patriarchy, the context in which Femen was founded, made it possible however, she writes, for Svyatski to take control of the Ukranian wing of the movement. "He is sexism, male domination, and oppression against women personified." The women, she concludes, have freed themselves from him.

In this respect, the revelation depicted in the documentary could be regarded as evidence of the power of the patriarchy -- but also of the power of the Femen women. The disclosure effectively justifies their struggle: The patriarchy can be overcome. Headlines like "Coup of the Humbled" (as the title of the story in Friday's edition of the Süddeutche Zeitung read) suggest that if the recent revelations were in fact a publicity stunt, they have been an effective one.

Of course there are still contradictions and unanswered questions. The fact that Svyatski's role has been concealed does damage the group's credibility. It also remains unclear whether, how and when Femen actually separated from him (a request to the group by SPIEGEL ONLINE was not answered). In late July, the group announced that "Femen's political scientist Victor Svyatski" had been brutally beaten shortly before a planned Putin visit.

Such contradictions have always been associated with the movement and polarized the public. Femen's critics have now had their worst suspicions confirmed. Their supporters, on the other hand, are likely to find a powerful story of emancipation. For the Femen narrative, that means one thing: Time for the next act.