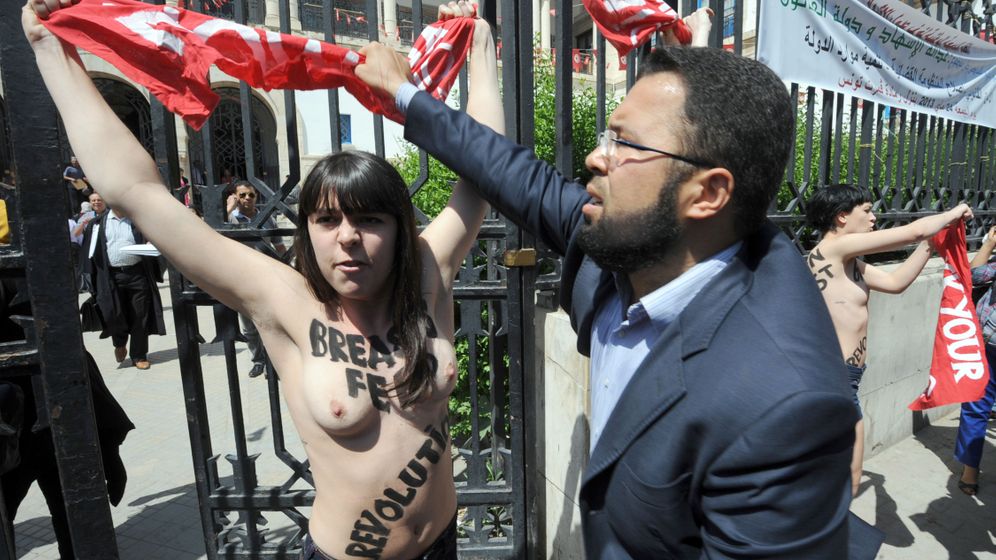 With their topless protest in Tunis, three Femen activists -- one German, two French -- caused widespread outrage in Tunisia last month. Representatives of the Muslim community have already expressed their anger, but now Tunisian feminists are also criticizing the women's actions.

"Femen, please leave us alone," appealed Tunisian feminist and opposition leader Maya Jribi in an interview with SPIEGEL ONLINE. "You risk ruining everything that we have fought for."

At the end of May the three Femen activists demonstrated half-naked in front of the Justice Ministry in Tunis. It was the group's first such stunt in an Arab country. On Wednesday, a Tunisian court convicted the women of public indecency and sentenced each of them to four months in prison.

The three young Europeans were protesting in support of Tunisian activist Amina Sboui, who has gone by the name of Amina Tyler. Sboui is currently in prison for protesting a Salafist gathering and writing the word "Femen" on a wall near a cemetery. She was convicted of desecrating a cemetery and public indecency.

"We already have enough problems in Tunisia. Femen, please don't add one more," says Jribi. The 53-year-old Tunisian politician has been working for decades for women's rights, first under the authoritarian regime of Zine el-Abidine Ben Ali and now under the Islamist-led coalition government.

Playing into the Hands of Islamists

When it comes to women's rights, Tunisia is ahead of the curve in the Arab world. There is a decades-old feminist movement, to which Jribi belongs. She leads one of the country's major political parties, the secular-liberal Republican Party, and hers is one of the loudest voices in Tunisia's Constituent Assembly. One of her central goals is making sure that women's rights are not scaled back under pressure from radicals.

"We in Tunisia have a different cultural and political context than in Germany," says Jribi. "Here, Islamists try to explain women's issues in terms of identity politics." The 'emancipated woman' is a concept of the permissive, debauched West, she says, and it doesn't work in Tunisia. "We Tunisian feminists are trying to steer the discussion away from identity. Women's rights are a social and political issue," says Jribi.

But the efforts of Tunisian women are now endangered by Femen, she complains. In their own way, the European activists are playing the game according to the Islamists' rules, she says. They are turning the emancipation of Tunisian women into a question of identity -- as well as a culture war, by dubbing their campaign "Topless Jihad."

After the activists were charged on Monday, Femen announced that they would be staging further protests in Tunisia. "Please don't," says Jribi. "There are other ways to fight for women's rights in Tunisia -- without getting undressed."

The German government, meanwhile, has expressed concern about the incarceration of the activists. "The council of the three women has decided to appeal the verdict," said a spokeswoman for the Foreign Ministry. The German Embassy in Tunis will "continue to give consular guidance to the German national and will follow the proceedings carefully."

Sources at the Foreign Ministry say that Germany's human rights commissioner, Markus Löning, will travel to Tunisia to visit to the imprisoned Femen activists.