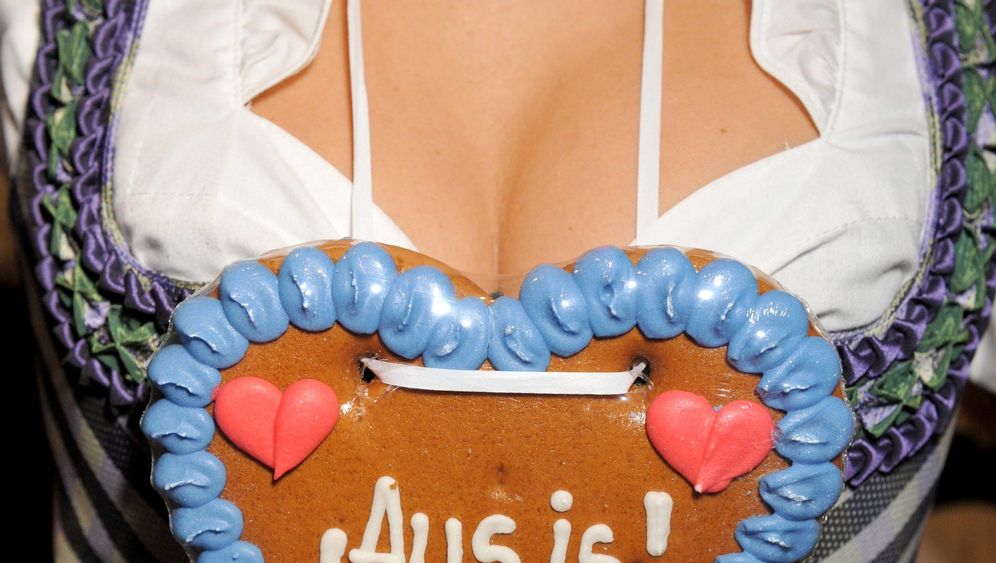 Was it the sunny weather, the economic recovery or the special anniversary? All three factors might have played a part in the surge in beer consumption at the two-week Munich Oktoberfest this year to 7 million liters, up 500,000 from 2009 and just above the previous high of 6.94 million set in 2007, according to an impressive set of statistics provided by the organizers after the party ended on Monday.

"I've no idea why people drank that much," Gabriele Papke, the spokeswoman for the festival, told SPIEGEL ONLINE. "They were simply thirsty."

It was a record that befitted the 200th anniversary of the world's biggest beer festival which began in 1810 to mark a royal Bavarian wedding. The total number of visitors was estimated at 6.4 million, and some 550,000 to 600,000 people came on Saturday alone.

The annual compilation of statistics always makes for entertaining reading because it conveys the gargantuan scale of the party that attracts tourists from around the globe and has helped to make Bavaria's folk culture of dirndls, lederhosen and beer world-famous.

The visitor record was in 1985, when 7.1 million flocked to the festival.

The intriguing account of lost items provides a sound indicator each year of the power of a few liters, or Mass, of beer.

Firstly, and this may come as relief to close observers of Oktoberfest statistics in recent years, items retrieved from the tents this year again included a set of dentures, which had been absent from the list in 2009 for the first time in many years.

A total of 37 children were also lost.

Vintage Festival Section May be Repeated

Some 117 oxen were roasted on spits and 59 calves were also devoured, along with many thousands of portions of grilled chicken, sausages and pork knuckles.

The Oktoberfest marked the anniversary by devoting part of the Theresienwiese festival ground to a special historical section with a vintage tent serving specially brewed Jubilee Beer to the music of a traditional oompah band which played original tunes like "Heit gibt's a Rehragout," a happy song which means "Today We're Having Venison Ragout."

Some 310,000 liters of the Jubilee Beer were consumed as visitors emptied every single barrel of the rich amber nectar brewed in an unprecedented cooperation between the city's six main breweries -- Hofbräu, Löwenbräu, Augustiner, Hacker Pfschorr, Spaten and Paulaner. The addition of a historical section to the Oktoberfest was so successful that the organizers said they were considering repeating it in the coming years.

"People liked it so much that they started a petition appealing to the city to make it a permanent feature," the Oktoberfest spokeswoman, Gabriele Papke, said. "But it first has to be decided by the city council and no decision has been taken yet."

"The special flair of the nostalgic Jubilee Festival on the southern part of the Theresienwiese radiated across the entire festival," said Gabriele Weishäupl, the head of the organizing committee, in a statement. "This year's Oktoberfest was an exceptional one, unique and incomparable."

It was also unique in that it was the first Oktoberfest to impose a strict smoking ban in the 14 giant beer tents in line with a new Bavarian law outlawing smoking in pubs and restaurants. Beer tent managers had worried that the absence of smoke might infest the tents with unpleasant smells from from toilets, spilt beer and stale fat, but there were no reports of any worse than usual stench -- possibly because many visitors were too comatose to notice.

The heightened focus on tradition in this jubilee year increased the pressure on visitors to come in lederhosen and dirndls. Indeed, Bavarian folk fashion is becoming ever more popular around Germany in a marked change from just a few years ago when most northern Germans wouldn't have been seen dead in a pair of leather breeches or a frilly folk dress.

The theft of the heavy beer glasses fell to an estimated 130,000 this year, but police said there was a disturbing rise in the number of brawls in which the mugs were used as weapons. 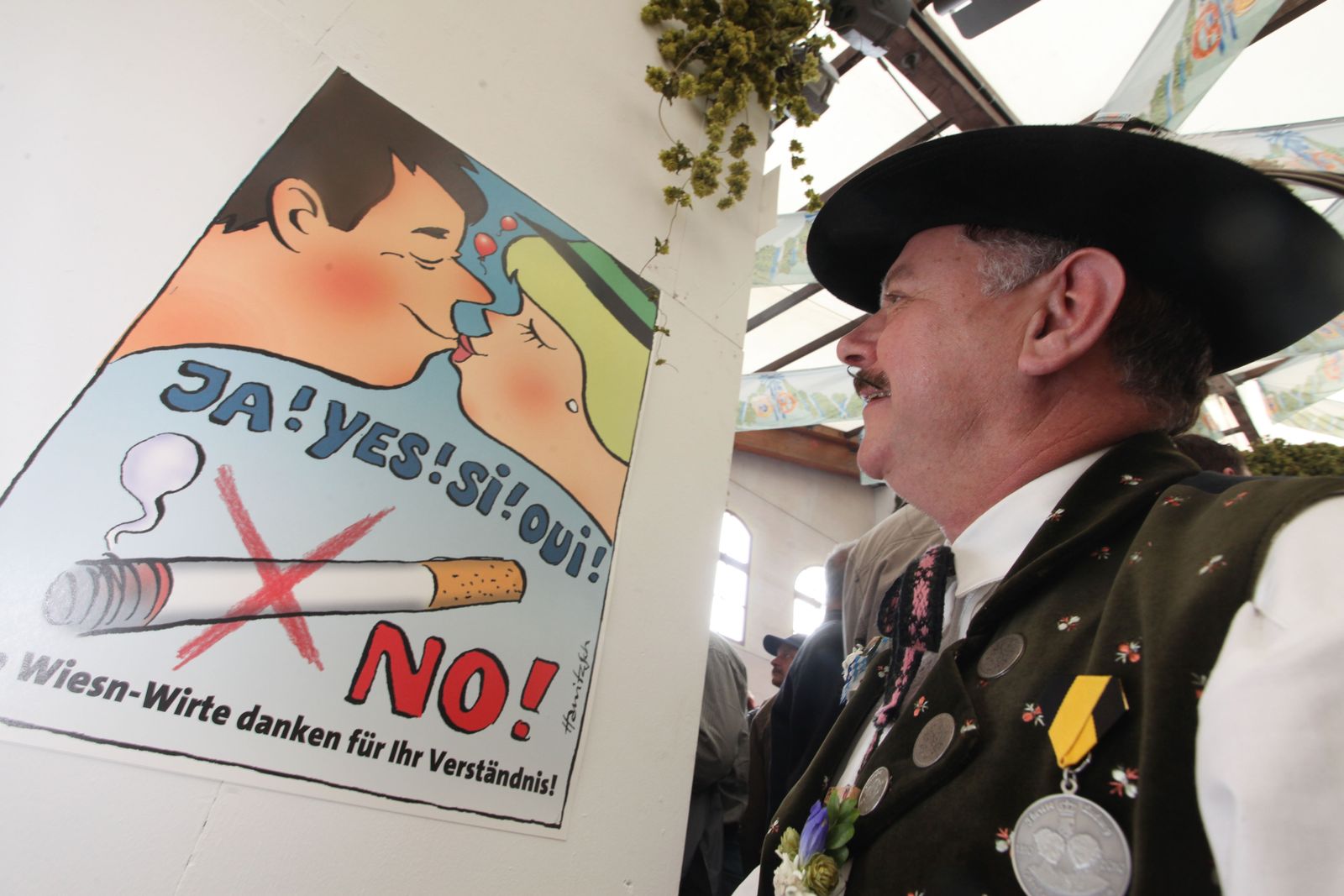 This was the first Oktoberfest to have a smoking ban following a decision by the state of Bavaria this year to outlaw smoking in pubs and restaurants this year. But there were no reports so far of any increase in unpleasant smells from spilled beer, greasy food, toilets and sweating Lederhosen-clad revellers that have in previous years been masked by clouds of smoke. 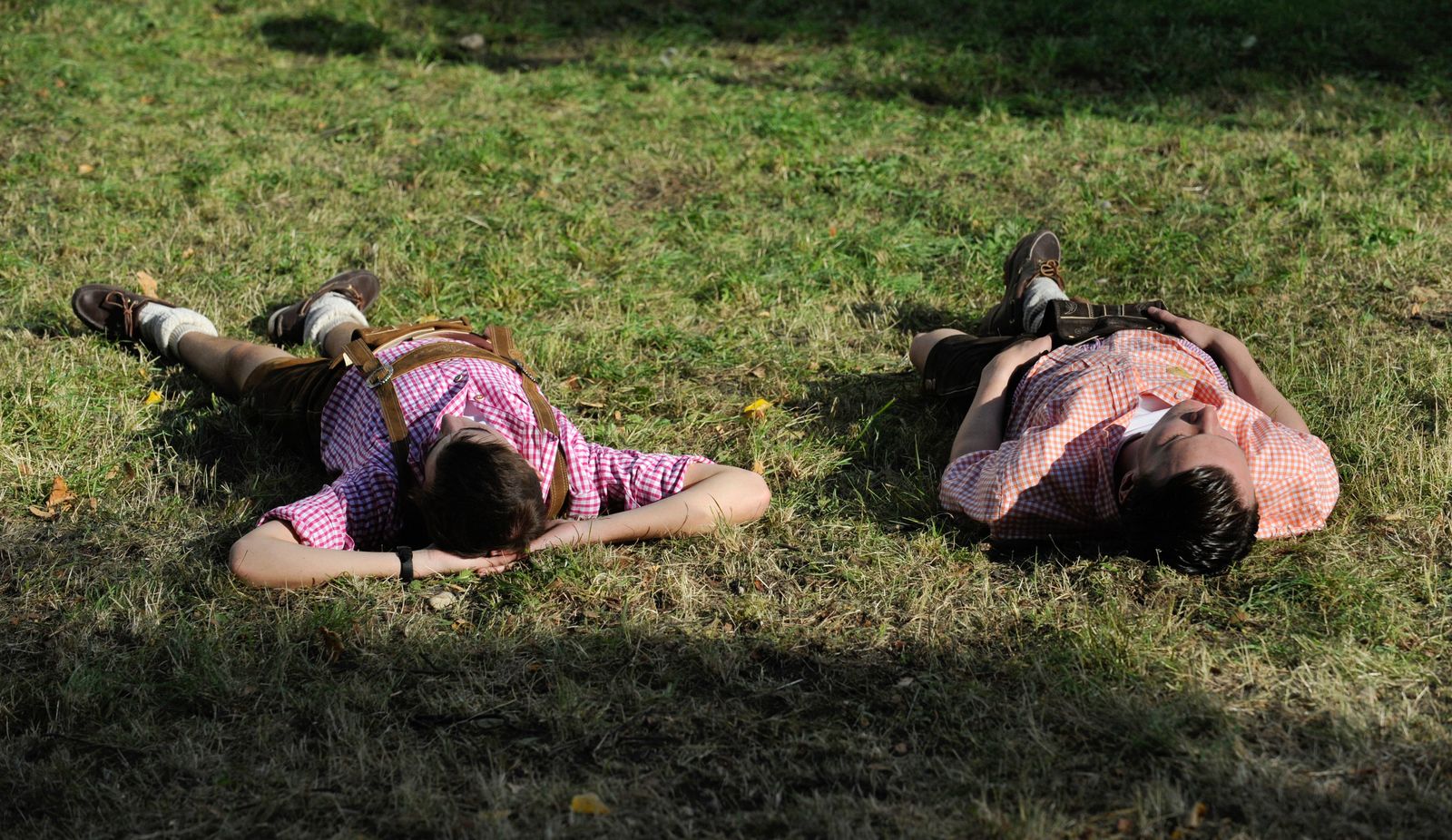 Its alcohol content at around 6 percent is higher than standard Bavarian lager, as these men have discovered.