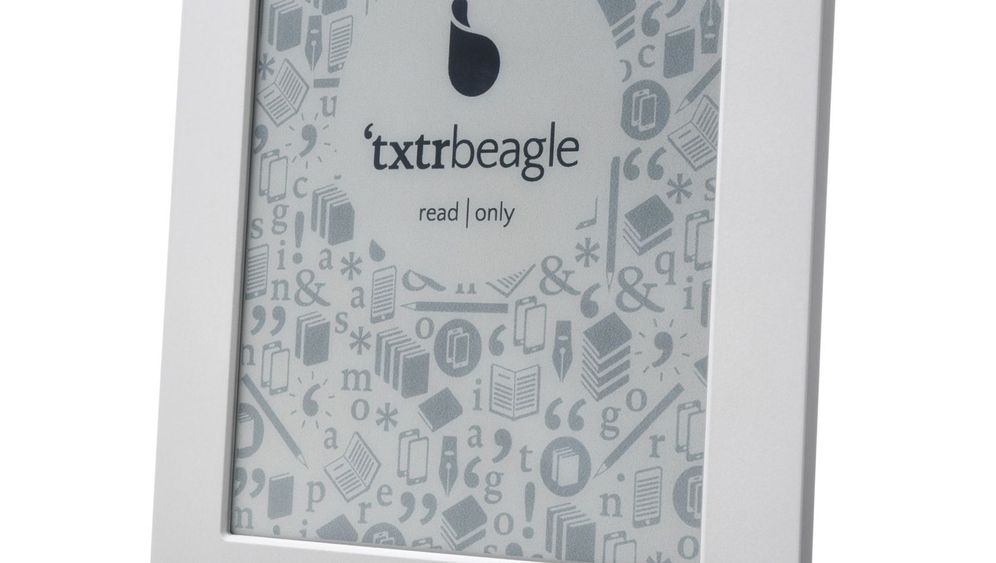 Less e-book reader for less money. That's the business model that Berlin-based start-up Txtr is counting on with the Beagle, the new e-reader it announced this week just in time for the Frankfurt Book Fair. The Beagle is incredibly light and will reportedly cost just €9.90 ($12.75) with a mobile-phone contract.

Many e-readers take exactly the opposite approach, attempting to lure customers with color displays, audio and video capability, and built-in web browsers. The Beagle, on the other hand, has a 5-inch (12.7 centimeter) display and four buttons: an on-off switch on the back, and forward, back and menu keys on the front. The Beagle is the minimalist's e-reader. It's good for one, maybe two things: reading, and a brutal price war.

With the Beagle, Txtr plans to undercut the price of the four biggest names in the market. The e-readers that go along with digital book offerings from Amazon, Google, iBooks (Apple) and Kobo (a Canadian company) cost considerably more -- they start at aound €60, and popular tablet computers fetch upwards of €200. Of course the price of these devices is also partly kept down by advertising and subsidies. For example, Amazon's Kindle has stayed cheap because the company aims to make profits from e-book sales, from software rather than hardware.

With the announcement of the Beagle, the e-reader market is poised to have what might be called its Reclam paperback moment. In 1867, the Reclam-Verlag, a German publisher based near Stuttgart, began publishing tiny yellow paperback books, creating a whole new market segment by coupling a bare-bones aesthetic with low prices. It was perfect for customers who were interested in the words rather than the packaging part of reading.

And bare-bones the Beagle is. The e-reader doesn't even have a rechargeable battery, just space for two AAA-batteries to pop in at the top. The weight is amazingly low at 128 grams (0.28 pounds), batteries included. The device is light and small and fits nicely in your hand. The battery bulge, however, is unsightly and keeps the Beagle from lying flat on the table.

All of this takes some getting used to, but the price is an enormous consolation. Txtr willl be able to bring the Beagle to market for so little by positioning the device as a sort of add-on with a mobile-phone contract. That is to say, the Beagle isn't supposed to be sold alone at first but, rather, as a complement to smartphones in a new category called "companion readers." As far as Adobe's copy-protection system is concerned, the Beagle isn't a stand-alone device. A single license will cover reading on a smartphone and a Beagle.

E-Book Purchases via Your Smartphone

Transferring e-book files over to the prototype only took a few seconds. Strangely enough, if you want to change the font size of whatever you're reading, you can't do that on the Beagle itself -- only on the smart phone. Since the Beagle doesn't have a USB port or a W-Lan card, e-books can only be transferred onto the device using a Bluetooth data signal.

One would think that Txtr could be sold in bookstores, perhaps with five preloaded best-sellers. The customer could then refill the device in the bookstore of his or her choosing with more e-books.

The Beagle's pitch sounds all good and well, but there's a catch. In 2009, Txtr already launched a reading device that failed. "We have done away with all the unnecessary bells and whistles," said Andreas Steinhauser, one of the firm's founders, at the time. However, that device still included W-Lan and mobile connectivity.

In a rare case of a device getting simpler from one version to the next, even more fat has been trimmed from the Beagle. The Beagle is supposed to be on the market before Christmas -- provided, that is, that the bookstores and mobile telephony companies embrace the prototype and that Txtr has more success this time than it did three years ago.