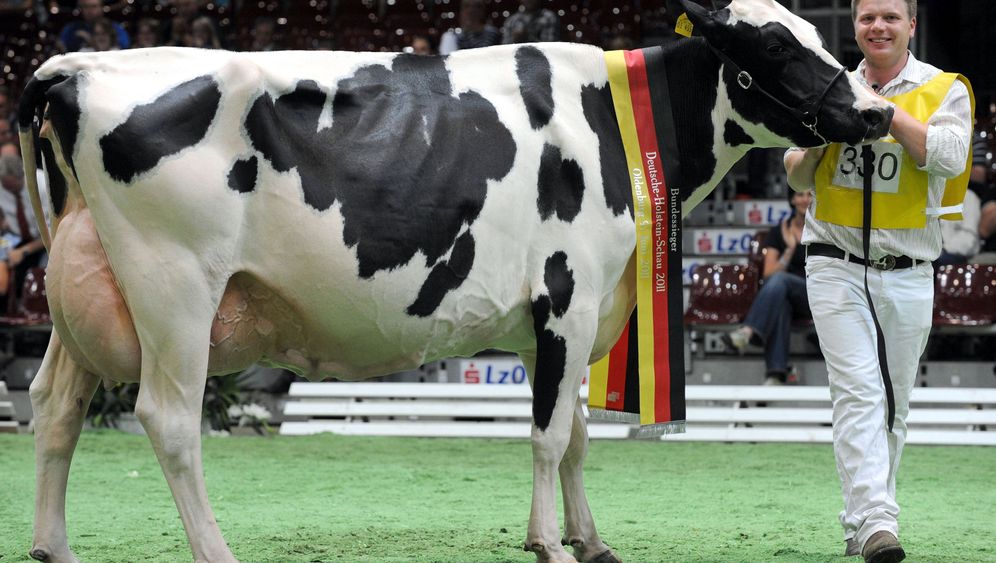 Photo Gallery: Krista is the Fairest in the Land

Forget Germany's Next Top Model and Heidi Klum. This week, the German gaze was trained on the country's most beautiful cow. "Krista" became the envy of bovine beauty queens across the land when she won the grand prize at the 2011 German Holstein Show, her second time to take the pageant's top honor.

Krista successfully defended her 2009 title against a field of much heavier competition than that faced by most other beauty contestants. Of some two million hopeful dairy dames, just over 200 were chosen to lock horns over the grand prize, which comes complete with a trophy and cow-sized sash. Eight finalists strutted their stuff for a panel of jurors in the northern German city of Oldenburg on Thursday night. But it was Krista, described by juror Matthias Zens as "a perfect Holstein," who won over the jury with her professional demeanor and pleasing physique.

"The udder should be wide and the back high," said Zens on what makes a winner. With her straight back and strong legs, Krista has risen above the rest of the herd to rake in prizes on the bovine pageant circuit. The black and white bovine beauty has it all: a good figure, great legs and taut skin. As with human beauty contests, sagging is frowned upon. Other coveted traits include bright eyes, alertness and a plumb udder.

On the morning of the competition, stylists were busy primping contestants, armed with combs, scissors, brushes and blowdryers. No need for curling irons here, though. Cows have a "natural permanent wave," according to one stylist onsite. But preparation for the beauty contest began long before the day of the pageant.

To get her in top form for the competition, Krista's owner sent her to a special training camp, where she was washed and brushed daily, in addition to being acclimated to the noise and stress that are part of each pageant. But it wasn't exactly a supermodel-style weight-loss program. The cow from the town of Grossenkneten in Lower Saxony was actually encouraged to beef up with hay to achieve a round belly and firm, buxom udder.

For the owners, the beauty pageant is just for fun. But there is some pride that comes with helping a contestant make it to the top. Krista's breeder, Jörg Seeger, was photographed giving the cow a happy kiss after her big win.

Seeger had every right to be proud -- Krista showed practiced composure in front of the judges. But some of the inexperienced contestants didn't perform quite so well. First there was Sina, who urinated on the cowwalk. Another contestant, Cerin, crumbled under the stress of competition and tore down the jury table. Luckily, the jurors were patient. "It's a part of nature," noted Zens.

The Oldenburg competition isn't the only pageant of its kind in Germany. In February, "Petale" the cow made headlines when she won the "Miss Best in Show" title at a competition in Verden at the ripe old age of 38. According to event organizer Hermann Bischoff, "She convinced the judges because she radiates an amazing freshness, despite her advanced age."

9 Bilder Photo Gallery: Krista is the Fairest in the Land