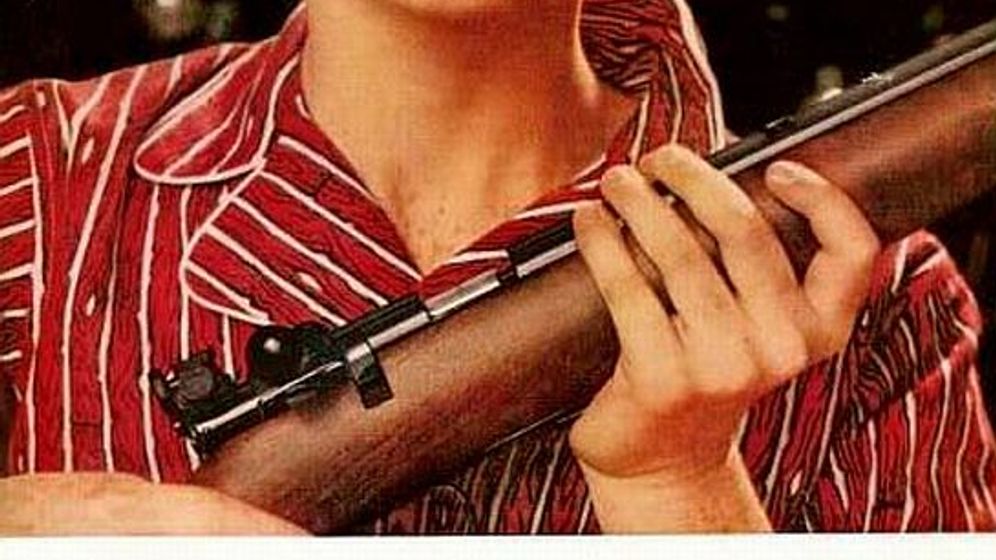 Photo Gallery: A Weapon under the Tree

The living room is decorated for the holidays, an armchair is positioned invitingly in front of the fireplace and a glistening Christmas tree stands next to it. The presents, piled up on the shag carpeting under the tree, have already been unwrapped -- and are displayed prominently throughout the room. Pistols, rifles and ammunition. "Make this a Browning Christmas," reads the perky font above the photo.

The image was part of a newspaper advertisement printed decades ago to lure US readers to purchase Browning weapons as gifts for their loved ones. In recent years, it has made its rounds on the Internet, and the comments attached to it show that many Americans can still recall having seen it. And there are others too, such as the image of the wide-eyed, freckled boy who has just unwrapped his present. He holds his new rifle in his hands and says, "Gee Dad … a Winchester!"

In the wake of the recent school shooting in the US, the ads now seem like a macabre joke. Back in the 1950s, however, when they were printed, they hardly raised eyebrows. Indeed, many of those in the US who vehemently insist on their right to own guns were shaped by such ads when they were growing up. And they clearly show the nonchalance with which Americans then and, to a large degree, now approached weapons.

"The King Air Rifle gives a boy an air of manliness and power, makes him alert, self-confident, resolute. It starts in a natural way the training which in later years will make him a leader in the business world," the advertisement from 1905 reads. It shows two boys playing with guns.

The air rifle as a status symbol for young boys: It was Markham's competitor Plymouth Iron Windmill Company, later Daisy Company, which perfected the strategy, with an air rifle called "Daisy." The film "A Christmas Story" first hit the cinemas in the US in 1983 and quickly advanced to become a holiday classic. It's success can at least partially be explained by the fact that entire generations of men could identify with its protagonist, Ralphie, who grew up in Indiana in the 1940s. Ralphie wanted nothing for Christmas as bad as he did an "Official Red Ryder Carbine-Action Two-Hundred-Shot Range Model Air Rifle."

For many boys of that era, owning a Daisy Red Ryder was their greatest wish. The gun afforded them the hallowed combination of responsibility and adulthood. The BB gun is still in production and more than 10 million have been sold since Daisy started making them in 1938.

'You'll Shoot Your Eye Out'

Many kids who identified with Ralphie from "A Christmas Story" shared his dramatic fate. When they expressed their Christmas wish for a Red Ryder BB Gun, their desire was spurned with the warning, "You'll shoot your eye out!"

The original maker of Winchester guns understood the broad sentiment of fear shared by mothers and addressed it in their own advertising campaign directed towards fathers. The ad starts out, "Suppose you want to give a Winchester 22 to your 12-year old. But the wife says, 'It's too dangerous now. Wait till he's older.' What do you tell her?"

The ad then goes on to answer the question it poses:

"First, tell her exactly why you think a boy should learn to handle guns early. Tell her he may not get a chance later. And too many kids grow up thinking guns are toys. Tell her a boy's hankering to shoot and go hunting is perfectly normal. Something he's born with. A part of his American tradition…. Tell her what it's like for a boy in the woods with a 22. Tracking his first rabbit. Outwitting a fox. Sitting very still under a squirrel tree. Tell her that state conservation programs even encourage hunting to help maintain the balance of nature. And the National Rifle Association conducts a shooting program to teach youngsters gun safety and sportsmanship and how to handle guns. Finally, tell her that when an oldtime hunter like you has a boy who wants to hunt, it's his obligation to teach him all he knows about guns, game and the ways of nature. And buy him a Winchester. And take him hunting. Why a Winchester? Because at Winchester we still believe 22's are real guns."

The transition from playing cowboy to shooting real weapons was fluid, especially for people who grew up in the 1950s and the 1960s and were drafted to fight in the Vietnam War. Still those who went off to war had a lot to learn. "Viet Nam is no place for the traditional American rifleman, who prides himself on long-range sharpshooting and an unerringly steady hand," wrote Time Magazine in a 1967 article about a new training program called "Quick Kill" in solider slang.

"Quick Kill is for the shot you've got to make when you don't have time to line up your sights," Colonel William Koob, 47, director of weapons at Fort Benning, is quoted as saying in the article. "When it's either kill or be killed."

The article compares the technique with the methods that young kids instinctively use when they play cowboys and Indians. The training program used, of all things, Daisy BB guns, the air rifle that so many little cowboys yearned for.