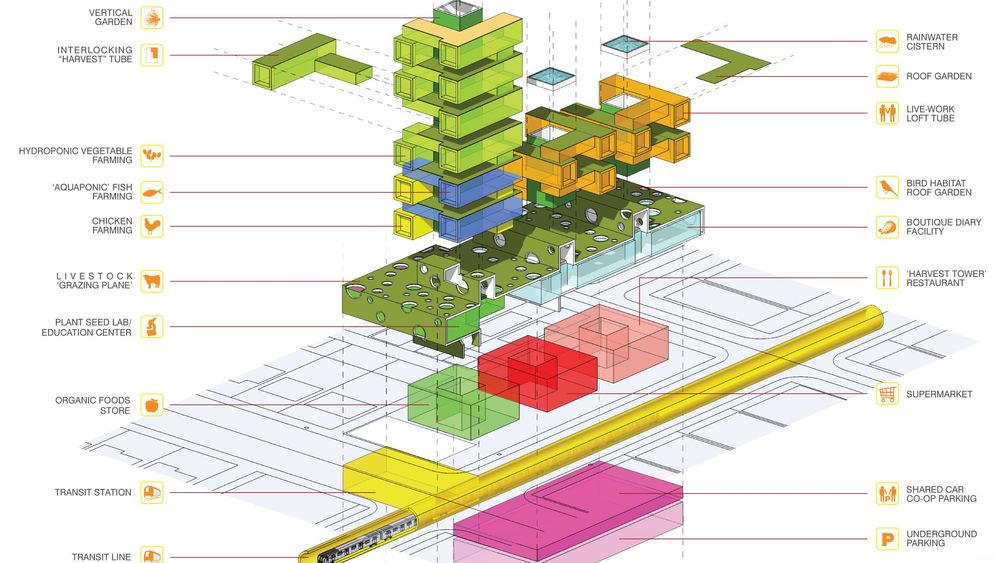 One day, Choi Kyu Hong might find himself in a vegetable garden on the 65th floor of a skyscraper. But, so far, his dream of picking fresh vegetables some 200 meters (655 feet) up has only been realized in hundreds of architectural designs.

In real life, the agricultural scientist remains far below such dizzying heights, conducting his work in a nondescript three-story building in the South Korean city of Suwon. The only thing that makes the squat structure stand out is the solar panels on its roof, which provide power for the prototype of a farm Choi is working on. If he and his colleagues succeed, their efforts may change the future of urban farming -- and how the world gets its food.

From the outside, the so-called vertical farm has nothing in common with the luxury high-rises surrounding it. Inside the building, heads of lettuce covering 450 square meters (4,800 square feet) are being painstakingly cultivated. Light and temperature levels are precisely regulated. Meanwhile, in the surrounding city, some 20 million people are hustling among the high-rises and apartment complexes, going about their daily lives.

Every person who steps foot in the Suwon vertical farm must first pass through an "air shower" to keep outside germs and bacteria from influencing the scientific experiment. Other than this oddity, though, the indoor agricultural center closely resembles a traditional rural farm. There are a few more technological bells and whistles (not to mention bright pink lighting) which remind visitors this is no normal farm. But the damp air, with its scent of fresh flowers, recalls that of a greenhouse.

Heads of lettuce are lined up in stacked layers. At the very bottom, small seedlings are thriving while, further up, there are riper plants almost ready to be picked. Unlike in conventional greenhouses, the one in Suwon uses no pesticides between the sowing and harvest periods, and all water is recycled. This makes the facility completely organic. It is also far more productive than a conventional greenhouse.

Choi meticulously checks the room temperature. He carefully checks the wavelengths of the red, white and blue LED lights aimed at the tender plants. Nothing is left to chance when it comes to the laboratory conditions of this young agricultural experiment. The goal is to develop optimal cultivation methods -- and ones that can compete on the open market. Indeed, Korea wants to bring vertical farming to the free market.

Vertical farming is an old idea. Indigenous people in South America have long used vertically layered growing techniques, and the rice terraces of East Asia follow a similar principle. But, now, a rapidly growing global population and increasingly limited resources are making the technique more attractive than ever.

The Green Revolution of the late 1950s boosted agricultural productivity at an astounding rate, allowing for the explosive population growth still seen today. Indeed, since 1950, the Earth's population has nearly tripled, from 2.4 billion to 7 billion, and global demand for food has grown accordingly.

Until now, the agricultural industry could keep up well enough -- otherwise swelling population figures would have leveled off long ago. But scientists warn that agricultural productivity has its limits. What's more, much of the land on which the world's food is grown has become exhausted or no longer usable. Likewise, there is not an endless supply of areas that can be converted to agricultural use.

By 2050, the UN predicts that the global population will surpass 9 billion people. Given current agricultural productivity rates, the Vertical Farm Project estimates that an agricultural area equal in size to roughly half of South America will be needed to feed this larger population.

Vertical farming has the potential to solve this problem. The term "vertical farming" was coined in 1915 by American geologist Gilbert Ellis Bailey. Architects and scientists have repeatedly looked into the idea since then, especially toward the end of the 20th century. In 1999, Dickson Despommier, a professor emeritus of environmental health sciences and microbiology at New York's Columbia University seized upon the idea together with his students. After having grown tired of his depressing lectures on the state of the world, his students finally protested and asked Despommier to work with them on a more positive project.

From the initial idea of "rooftop farming," the cultivation of plants on flat roofs, the class developed a high-rise concept. The students calculated that rooftop-based rice growing would be able to feed, at most, 2 percent of Manhattan's population. "If it can't be done using rooftops, why don't we just grow the crops inside the buildings?" Despommier asked himself. "We already know how to cultivate and water plants indoors."

With its many empty high-rise buildings, Manhattan was the perfect location to develop the idea. Despommier's students calculated that a single 30-story vertical farm could feed some 50,000 people. And, theoretically, 160 of these structures could provide all of New York with food year-round, without being at the mercy of cold snaps and dry spells.

Despite these promising calculations, such high-rise farms still only exist as small-scale models. Critics don't expect this to change anytime soon. Agricultural researcher Stan Cox of the Kansas-based Land Institute sees vertical farming as more of a project for dreamy young architecture students than a practical solution to potential shortages in the global food supply.

The main problem is light -- in particular, the fact that sunlight has to be replaced by LEDs. According to Cox's calculations, if you wanted to replace all of the wheat cultivation in the US for an entire year using vertical farming, you would need eight times the amount of electricity generated by all the power plants in the US over a single year -- and that's just for powering the lighting.

It gets even more difficult if you intend to rely exclusively on renewable energies to supply this power, as Despommier hopes to do. At the moment, renewable energy sources only generate about 2 percent of all power in the US. Accordingly, the sector would have to be expanded 400-fold to create enough energy to illuminate indoor wheat crops for an entire year. Despommier seems to have fallen in love with an idea, Cox says, without considering the difficulties of its actual implementation.

Getting Closer to Reality

Even so, Despommier still believes in his vision of urban agriculture. And recent developments, like the ones in South Korea, might mean his dream is not as remote as critics say. Ten years ago, vertical farming was only an idea. Today, it has developed into a concrete model. About two years ago, the first prototypes were created.

In fact, the concept seems to be working already, at least on a small scale. In the Netherlands, the first foods from a vertical farm are already stocking supermarket shelves. The PlantLab, a 10-year-old company based three floors underground in the southern city of Den Bosch, has cultivated everything from ornamental shrubs and roses to nearly every crop imaginable, including strawberries, beans, cucumbers and corn. "We manage completely without sunlight," says PlantLab's Gertjan Meeuws. "But we still manage to achieve a yield three times the size of an average greenhouse's." What's more, PlantLab uses almost 90 percent less water than a conventional farm.

As a country which has limited land resources but which possesses much of the necessary technology, the Netherlands seems to be an ideal place to develop vertical farming. This is especially true now that its residents are increasingly demanding organic, pesticide-free foods -- and are prepared to pay more for it.

'The Next Agricultural Revolution'

Despommier believes that entire countries will soon be able to use vertical farming to feed their populations. The South Korean government, at least, is interested in exploring the possibility. At the moment, the country is forced to import a large share of its food. Indeed, according to a 2005 OECD report, South Korea places fifth-to-last in a global ranking on food security. Increasing food prices, climate change and the possibility of natural disasters can compound the problem.

These facts are not lost on the researchers in the vertical farming laboratory in Suwon. "We must be prepared to avert a catastrophe," Choi says.

Still, it will be some time before vertical farming is implemented on a commercial scale in South Korea. Choi's colleague Lee Hye Jin thinks that five more years of research are needed. "Only then will our vertical farm be ready for the free market," he says.