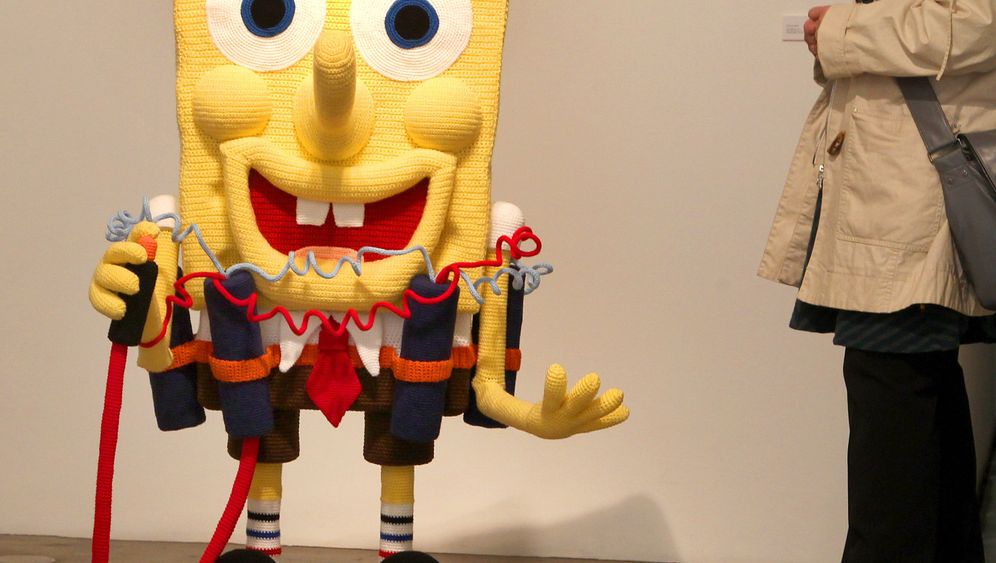 At first glance, Berlin artist Patricia Waller's textile sculptures look like child's play. But another look reveals that many of the expertly crocheted likenesses of beloved cartoon and pop culture figures are in the throes of death -- or close to it. Hello Kitty plunges a Samurai sword into her gut, Winnie the Pooh hangs in a noose and SpongeBob SquarePants prepares to ignite a suicide bomb strapped to his waist.

Meanwhile, Sesame Street favorite Ernie has been turned into a degenerate drunkard begging on the street, and the Sandman character from Germany's beloved childrens' TV series of the same name has overdosed on sleeping pills. The tragic figures featured in Waller's latest exhibition, "Broken Heroes," are meant to inspire laughter that quickly turns to discomfort as viewers question what might have driven the famous characters to such despair, she told SPIEGEL ONLINE.

"This show is about heroes and failure," the 49-year-old said. "Heroes serve a role model function that reflects our longing for something special, but I wanted to show what happens when they fail." The artist said she had been inspired by the contemporary cult of stardom, especially the fleeting fame brought on by the trend in reality television shows.

Waller's nearly life-size rendering of Spiderman, for example, the exhibition's most expensive work at around €24,000 ($32,000), shows the comic book icon hopelessly entangled in his own web. "He's stuck in the same way that we can all get in our own lives," she said.

The Santiago, Chile-born artist, who has lived most of her life in Germany, spent two years creating the concept and crafting the brightly hued figures. She intentionally juxtaposed the "stuffy housewife art form of crochet with cutting irony," and said viewers enjoy seeing these well-known characters in unexpected situations.

But one figure displayed at Berlin's Deschler Galerie has been met with unanticipated emotion. Slumped facedown and alone in the corner of a dark room is Minnie Mouse, portrayed as a rape victim with crocheted streams of blood running between her legs. Seeing what Waller calls the "embodiment of innocence" in such state has shocked gallery visitors.

"I have been stunned to hear so many people say that they were really moved by this," Waller said. "I thought that I wouldn't be able to do that with these kinds of works, but it's nice to know you can still inspire that kind of reaction."

Still, Waller adds that her latest show features works that are "relatively unbloody" -- at least when compared to her earlier works. These include one that depicts Miss Piggy going through a meat grinder and another of a squirrel being bludgeoned with a shovel.

German mass-circulation daily Bild insinuated on Tuesday that the violent situations Waller created for her cartoon and story book characters might be traumatic for children, but Waller said that hasn't been the case. Because of the way pain plays out in cartoons, children expect the characters to simply recover. "At shows they recognize them and then jump toward them, which of course makes me a bit nervous," she said.

"Broken Heros" runs until June 9, 2012 at the Deschler Galerie in Berlin.