Many Krakow residents have long known about Marcin Ryczek. The 30-year-old photographer and graphic designer runs the website Nieznany Kraków (Unknown Krakow), a guide that features people and places from the southern Polish city's historic Kazimierz district. But after he posted a remarkable photo recently on the site's Facebook page, his name has been seen all over the world.

Ryczek shot the masterfully composed photo in late January from the Grunwaldzki Bridge, capturing a perfect, almost surreal contrast and a wealth of texture when a man dressed in black on the snowy river bank bent over to feed a bevy of swans in the dark water. Within three weeks of posting the image online it went viral, gaining his site some 10,000 new fans, he says.

SPIEGEL ONLINE: Mr. Ryczek, did you come across the scene by chance?

Ryczek: Yes. I pass by this place often. On the day I took that photo, I had noticed the unusual natural contrast it presented -- the two sides separated in a straight line by the riverbank. It reminded me of the yin and yang symbol, and I began to compose the concept for the photo in my mind. Then suddenly the white swans appeared on the black background, and the black figure was on the white surface. This moment inspired me, and luckily I was able to capture it.

SPIEGEL ONLINE: Why has it been so well-received?

Ryczek: The power of this photo lies in the details, which are open to many interpretations. The countless comments and discussions it has sparked on the sites where it has been published prove that. I wanted to show that even such a banal subject could be recorded in an unconventional way.

SPIEGEL ONLINE: Where has it been published so far?

Ryczek: It's on nearly all of the important social networks in the United States, China, Japan, Russia, Israel and many other countries. On reddit.com it got some 3 million hits within 24 hours, and the Polish TV station N24 even aired it too. Actor Jared Leto and novelist Jonathan Carroll also praised the photo.

SPIEGEL ONLINE: Are you surprised by the hype?

Ryczek: Although I was very happy with the photo, of course I couldn't have foreseen that. I am unbelievably happy about the worldwide attention. The Internet is full of photos and it's difficult to stand out with something original. My example shows that expressive power lies in simplicity.

Ryczek: The prerequisite for a good photo is approaching people, places and daily situations with sensitivity. And being open to everything.

SPIEGEL ONLINE: What has changed for you since the photo went viral?

Ryczek: The sudden fame of the photo shows that it's worth investing all our power in things that are important to us. It encourages me to know that the path I took was right. And the many positive reactions are really motivating. 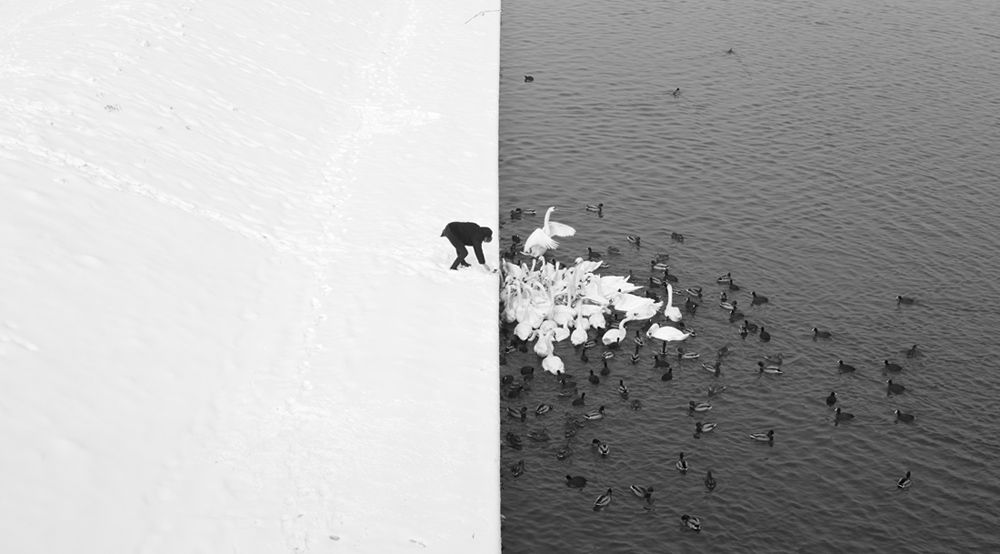 "A Man Feeding Swans in the Snow" was taken in Krakow, Poland