It has all the hallmarks of a disaster movie: A container filled with the swine flu virus explodes on a busy train. But that's exactly the scenario that briefly caused the Swiss authorities some alarm on Monday evening. In the midst of global fears of a swine flu pandemic, a container with swine flu exploded on a train carrying over 60 people. 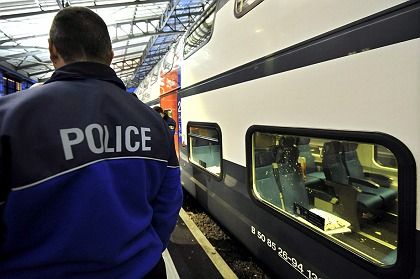 The Intercity train is seen in Lausanne station after it had been evacuated.

Luckily, however, it was not the mutated swine flu virus that has killed around 150 people in Mexico. The police quickly reassured the public that there was no danger of any infection.

According to the police, a lab technician with the Swiss National Center for Influenza in Geneva had travelled to Zurich to collect eight ampoules, five of which were filled with the H1N1 swine flu virus. The samples were to be used to develop a test for swine flu infections.

The containers were hermetically sealed and cooled with dry ice. However, it seems the dry ice was not packed correctly and it melted during the journey. The gas coming from the containers then built up too much pressure and the ampoules exploded, as the train was pulling into a station.

After consulting with a virologist, the police stopped the train just before Lausanne station and evacuated it, taking the precaution to isolate all those on board for one hour. A specialist for infectious diseases then reassured all those involved that the particular strain of swine flu on the train posed no risk for humans.

Taking no chances, the police took the contact details of all the passengers before allowing them to continue on their journey.