Life used to be simple. The 1935 edition of the Volks-Brockhaus illustrated encyclopedia defined a bicycle as "a two-wheeled vehicle powered by pedalling a crank." The contraption also had clearly identifiable components, including a "fixed frame, front and back wheel, drive mechanism, seat, and steering apparatus." Riders were generally cultivated individuals who simply wanted to get from point A to B more quickly by using their own muscles.

Today a bicycle can have four wheels, a drive shaft, weigh more than two tons and have a length of 5 meters (around 16 feet). It can also achieve a noise level equivalent to that of an oncoming sports car. At least that's the case when up to 16 tipsy jokers are sitting on the rolling pub known as a "Bierbike," accompanied by loud music and 20 liters (42 US pints) of beer, hindering traffic at the excruciatingly slow pace of, at most, 10 kilometers per hour (6 miles per hour). This scene plays out regularly in 36 cities across Germany, annoying drivers and residents. Some cities even have variations on the idea. Frankfurt has an "Äpplerbike," on which the local apple cider is served, while the southern city of Freiburg has one that serves wine.

YouTube features a number of videos taken during the wild rides. One shows 11 intoxicated English tourists tippling through Berlin on a rainy day wearing reproductions of Russian and East German army caps purchased from street vendors. They make an enormous racket singing bawdy songs, then the barkeep tears off his shirt. At red lights, they dance on the Berlin streets.

Munich and Düsseldorf Get Tough

Whether the occasion is Father's Day (a holiday when German men traditionally get drunk), Carnival, Christopher Street Day or a bachelor's party, getting tanked while cycling on Bierbikes has become increasingly popular. But not everyone is amused. One Facebook group called "Youth against Bierbikes" has some 581 members who scorn the vehicles as "madness on wheels" and seem genuinely concerned about their spread across the nation. "Ten totally wasted jackasses drive these massive things through Germany's inner cities, yet any driver who fails a breathalyzer test is treated like a felon," one comment reads. The group leader, who calls himself "Phil Lip," has even suggested an International Anti-Bierbike Day, while group member Irmina Kaniewski says "the world is calling for the abolition of these pedalling village idiots."

But now the cities of Munich and Düsseldorf have taken a tough line on Bierbikes. This August, officials in the Bavarian capital Munich -- whose residents are known both for their love of beer and bikes -- banned Bierbikes on the city's "public streets, paths and squares." Düsseldorf already banned them in 2010, but remains locked in an ugly lawsuit with the tour operator that has reached all the way to North Rhine-Westphalia's upper administrative court in Münster, ending for the time being with a favourable ruling for the beer lovers. Further proceedings are scheduled for November.

Officials in Düsseldorf are deadly serious about their campaign against the boozy bikers. If 10 people set the unwieldy vehicle in motion, they complain in typical bureaucratese, then the "resulting change of location" creates a "side effect." Their purpose is not to provide a means of human transport, but to be a "mobile self-service bar." In other words, the party comes first, rather than transport. Such a vehicle would require a special permit -- which naturally doesn't exist.

Meanwhile the beer-bikers in Munich are defending their position by referring to the 1968 Vienna Convention on Road Traffic drafted by the United Nations. According to Article 1 of that convention, a cycle is "any vehicle which has at least two wheels and is propelled solely by the muscular energy of the persons on that vehicle, in particular by means of pedals or handcranks." The text seems tailor-made for the Bierbikes, thanks to its reference to more than just two wheels and the potential for more than one rider.

But the noise of the Bierbike alone is enough for Munich officials to discount them as true cycles. Munich authorities, at the behest of the police and annoyed residents, managed to find 17 individual regulations with which to measure a bicycle. The Bierbike could only fulfil five.

For example, while the Bierbikes always have a sober person manning both the brake and the handlebars, they were still deemed dangerous. (And this despite the fact that former state Governor Günther Beckstein himself once famously insisted that in Bavaria it was no problem to get behind the wheel after drinking 2 liters of beer.) The vehicle could still get stuck -- at a railway crossing, say -- "should the passengers cease their contribution to the forward motion due to physical inability to perform or a lack of will."

While such an accident has not yet found its way into Germany's traffic files, there was one incident reported in Cologne. Having stepped off a Bierbike to relieve himself, a young man was promptly rammed by a Volkswagen Golf. The victim was fortunate that he did not suffer more than serious bruising. In the meantime, his fellow partygoers had already moved on.

They apparently didn't even notice he was missing. 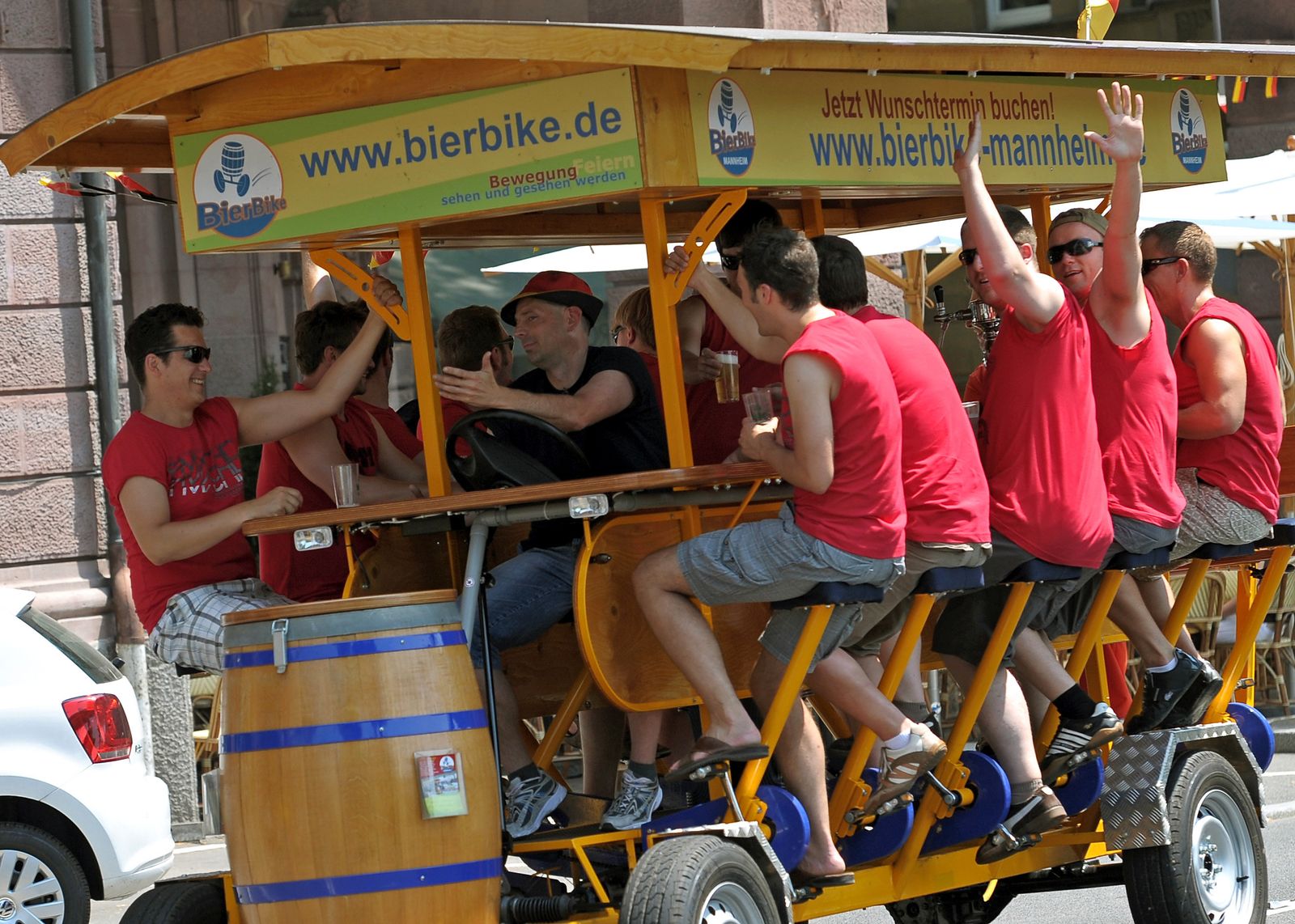