Deep in the Amazon basin, where traditional hunter-gatherers still live, researchers gave the indigenous population a lesson in biology. They used posters to explain to the inhabitants of the rain forest that a human being is never alone. Invisible, tiny creatures known as bacteria live on and inside our bodies -- and they can be quite useful.

The lesson was part of a project to research the bacteria of the local people. "When we asked them for samples of their feces, the people laughed," said one of the participating biologists, Maria Gloria Dominguez-Bello, from the University of Puerto Rico. Researchers succeeded in winning their trust, and the inhabitants of 10 huts allowed them to take swab samples, not only from their stool, but also from their hands, feet, noses and mouths.

The search for microbes aims to shed light on the nature of mankind's original bacterial flora. These indigenous test subjects have had almost no contact with outside civilization. Their bacteria are a virtually unadulterated product of evolution. Microorganisms help digest food, supply the body with vitamins, train the immune system and ward off harmful pathogens.

But how do these tiny benefactors fair when their host is exposed to a Western lifestyle? To answer this question, researchers not only took swabs from the traditional people living in the rainforest, but also from people in more highly developed locations in the Amazon basin, in larger settlements, in the Peruvian provincial capital Iquitos, and in Manaus, a Brazilian city with a population of nearly 2 million.

The 200 collected samples are still being analyzed in an American laboratory. But results might indicate that a Western lifestyle is harmful to bacterial colonists. Indeed, the use of antibiotics along with the rising number of cesarean section births, the increasing popularity of small families and excessive hygiene are threatening the microscopic helpers. "We believe these changes (in the microbial diversity) might be behind some of the most common diseases associated with modernity," says Dominguez-Bello.

Similar concerns are shared by Martin Blaser, a professor of microbiology at New York University in Manhattan, who also took part in the expedition to the Amazon region. "Our bacteria are not accidental; we have them for a reason," says Blaser. "Some of these useful guys are disappearing. As a consequence, human physiology is changing and therefore human health."

Physicians and biologists used to merely view these infinitesimally small creatures as pathogens, bacilli that weigh only 0.000000000001 grams but can kill a human being weighing 100,000 grams. But for some time now, scientists have recognized the vital importance of these microorganisms that accompany us every day. A balance between these permanent residents and their human hosts is crucial to maintaining what we call good health.

"We always looked at the bad guys," says Willem de Vos, a microbiologist at Wageningen University in the Netherlands. "But now we're looking at the good guys to understand how they preserve our health."

Until recently, researchers had not yet discovered all the things that creep and crawl inside and over the surface of our bodies. Since many microorganisms could not be cultivated in a Petri dish, they remained unknown. But now these colonists can be identified based on minute samples of genetic material. Thanks to advanced methods, microbiologists can use even the tiniest traces of DNA -- such as in a fleck of skin or on dental plaque -- to identify different species of bacteria.

In Europe, China and the United States, researchers have catalogued the colonists of hundreds of people. According to these findings, every human being lives in a microbial bubble. In addition to viruses, protozoa and fungi, more than 100 trillion bacteria, belonging to over 1,000 species, colonize the surface and deep layers of skin on our bodies (see graphic). They possess more than 100 times as many genes as their large host.

From a microbiologist's point of view, Homo sapiens is not an individual but, rather, a superorganism that only thrives because the members of this community have been living together since primeval times. Intestinal bacteria contribute 36 percent of the small molecules that are present in human blood. These tiny organisms process vegetable sugar molecules and thus meet 10 percent of the caloric intake requirements of the human ecosystem. The aggregate of all inhabitants of the body, the so-called human microbiota, constitutes an independent organ. Weighing in at 2 kilograms (4.4 pounds), it's heavier than the brain and has a biochemical activity that is comparable to the liver's.

This superorganism has evolved over millions of years -- and doesn't cope well with some of the innovations of the modern world. Antibiotics, for instance, may destroy dangerous bacteria, but beneficial ones also unfortunately suffer. Only two treatment cycles of the synthetic antibiotic ciprofloxacin are enough to deal a painful blow to the microbiota. Although the intestinal bacteria eventually grow back, it's now known that they don't regain their original degree of diversity.

Nevertheless, antibiotics continue to be carelessly prescribed to patients. In the US, the average child will have taken antibiotics between 10 and 20 times by the time he or she reaches the age of 18. This has prompted New York-based researcher Martin Blaser to refer to the "disappearing human microbiota." In medical journals, alarmed physicians have warned that the body's naturally healthy symbiosis is, in many cases, transforming into a debilitating microbial imbalance known as dysbiosis.

People affected by such microbial imbalances are often prone to allergic disorders, chronic inflammation of the small intestine, intestinal cancer, Type 2 diabetes and pathological obesity. Recent studies indicate that an impoverished flora could even be a contributing factor for Alzheimer's, Parkinson's, multiple sclerosis and autism.

The sophisticated, yet delicate nature of microbial life becomes apparent right at birth. When a newborn slides through the birth canal, it is automatically inoculated with lactobacilli from the mother's vagina -- precisely the bacteria that the infant requires to digest the mother's milk.

But during a C-section, this natural colonization can no longer take place. The baby is colonized at random, often by airborne bacteria from surfaces within the delivery room.

The microbiota of C-section children differ from their naturally born peers even a full seven years after birth. "The disappearance of microbes that play physiological roles early in life is particularly worrisome," says Blaser. "Perhaps they are missing in certain phases of the child's development."

What's more, a study of 1,255 mother-child pairs in Massachusetts indicated an increase in body weight. Of the children who were born in a natural manner, 7.5 percent were obese at the age of three -- compared to 16 percent of the C-section children.

Based on experiments with animals, Blaser has discovered that an abnormal bacterial colonization can cause excess weight. The New York physician fed mice a steady low dose of antibiotics for weeks, and then studied their colonization patterns. The drugs had changed the composition of the intestinal bacteria -- and thus also the animals' metabolism. The bacteria in treated mice activated more genes that transform sugar into fat.

Farmers are familiar with this phenomenon. They mix antibiotics into pig, cattle and chicken feed to promote growth and fatten up the animals more quickly -- a practice that is now banned in Germany. Blaser assumes that the drugs have the same effect on children. "Instead of the continuous, low-dose antibiotics that are administered on the farm, we are giving our children short, high-dose pulses," he warned in an article in Nature Reviews Microbiology in 2009.

A study of 11,000 children published in the International Journal of Obesity came to the same conclusion. According to the findings, children who were treated with antibiotics during the first six months of their lives have a 22 percent higher probability of being obese at the age of three.

In addition to increased body weight, a dysbiosis may also be connected with the susceptibility to allergic disorders and inflammation of the intestine. The immune system needs contact with intestinal bacteria in order to be able to differentiate between foreign cells and the body's own cells. If the diversity of bacteria is diminished, the immune system learns the wrong lessons. It classifies the body's own cells as foreign cells, which triggers allergic reactions.

Many people with autism have an abnormal digestive tract, as well. No one knows exactly why this is, but individuals with autism apparently have different intestinal bacteria than people without autism. For instance, they are missing the beneficial rod-shaped bacteria of the Bacteroides genus. Researchers at Columbia University, in New York, believe this allows harmful microbes to multiply. They examined the intestinal flora of 23 autistic children -- and discovered in 12 of the samples so-called Sutterella bacteria, which don't belong there.

There are now more than 25 different diseases and syndromes -- ranging from Alzheimer's and arteriosclerosis to depression and rheumatism -- that have been linked to an abnormal microflora.

This is good news for the food industry. It already sells so-called probiotic drinks and yogurts that contain lactic acid bacteria and allegedly improve the intestinal flora. But independent studies claim this is nonsense, saying that the bacteria ingested with the food usually don't even manage to colonize the intestinal tract. Experiments on humans have shown that, regardless of whether the test subjects ate probiotic yogurt every day or not, it had no influence on the composition of their microbiota.

A more promising method is to transplant bacteria from the stool of a healthy individual to a recipient. During fecal bacteriotherapy -- also known as fecal microbiota transplantation, or FMT -- the donated material is checked for parasites, such as tapeworms, stirred in a saline solution and administered via a tube or an enema. The method is already recommended for the treatment of chronic diarrhea. Researchers say that it could one day also be used to treat obesity and diabetes.

Willem de Vos, from Wageningen University, recently conducted a study with 18 men who were obese and had an abnormal sugar metabolism. Half of the patients had feces from slender, healthy donors flushed into their intestines. The others constituted the control group and were given samples of their own stool.

Six weeks later, the overweight subjects who had received foreign matter had a richer intestinal flora. No less than 16 bacterial strains had shown vigorous growth. The individuals' sugar metabolism had also normalized. By contrast, there were no such changes among the individuals in the control group.

Now, de Vos is looking for particularly beneficial bacterial strains that he intends to use to develop a groundbreaking microbiota transplant. He can draw on a collection of over 5,000 samples. But these stem from people from countries like Germany, Finland and the US -- and may have been ruined by a Western lifestyle.

Microbe hunters Dominguez-Bello and Blaser have perhaps been searching at just the right location. They hope that the formula for the best fecal therapy will come from the rainforests of South America. 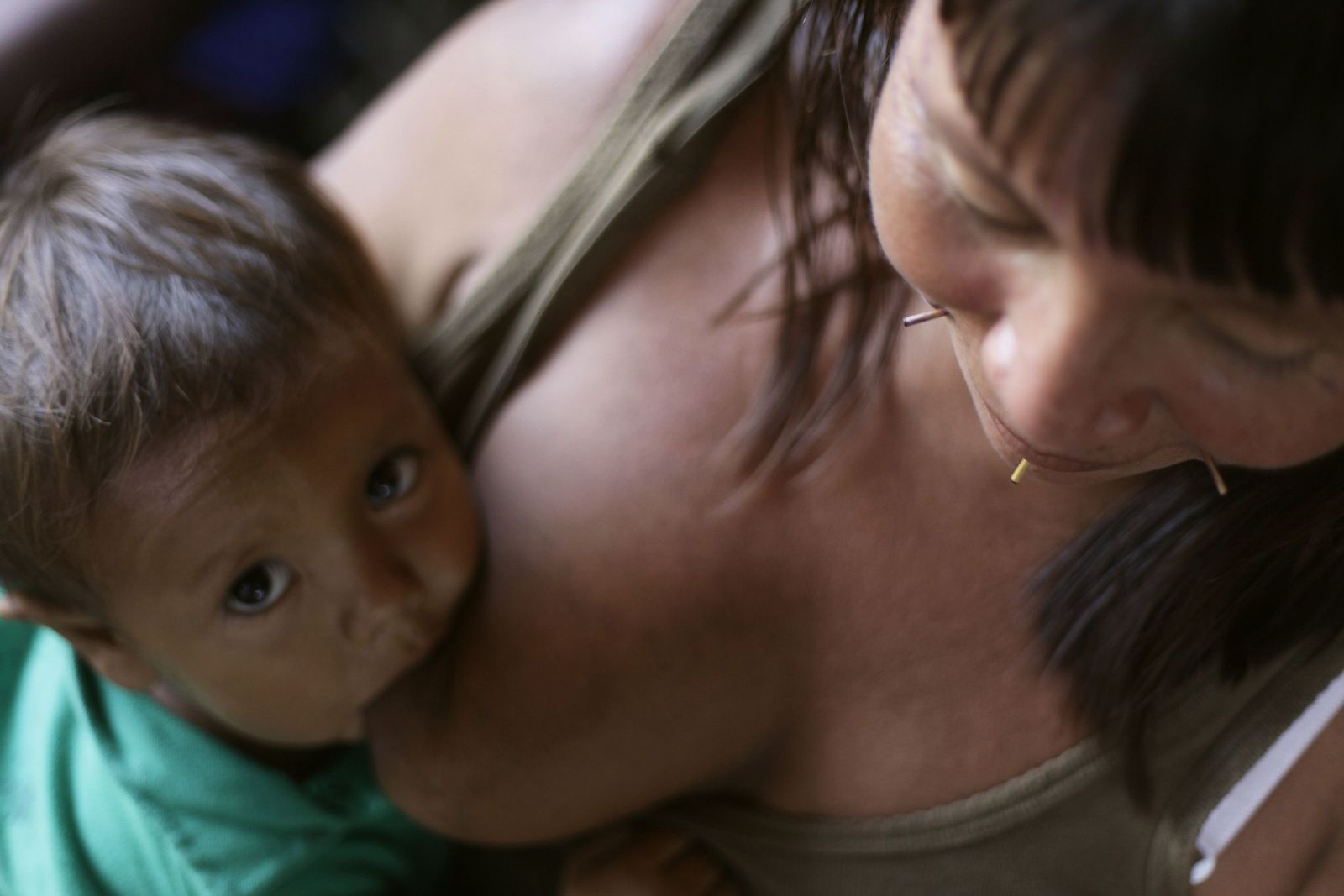 Research on indigenous populations in the Amazon is showing just how much the Western lifestyle has unbalanced crucial microbial flora in our bodies.